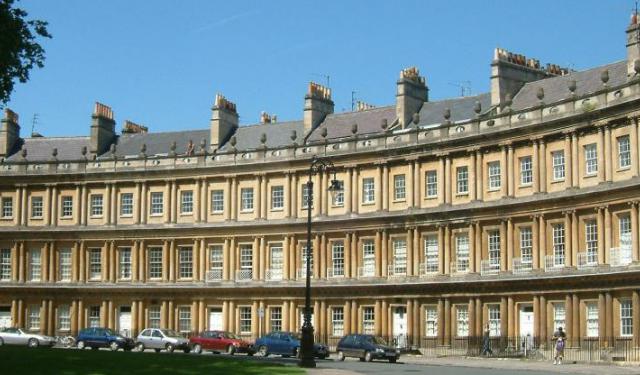 Central Bath is well known for its wonderful Georgian architecture. Many streets and squares were designed by famous architects John Wood, the Elder and his son John Wood, the Younger. Many buildings in Bath were built from the creamy Bath stone, obtained from the limestone Combe Down and Bathampton Down Miles. This self-guided walking tour takes you through such architectural masterpieces as the Royal Crescent, Circus, Lansdown Crescent and more.
Image Courtesy of Wikimedia and Christophe.Finot.
How it works: Download the app "GPSmyCity: Walks in 1K+ Cities" from iTunes App Store or Google Play to your mobile phone or tablet. The app turns your mobile device into a personal tour guide and its built-in GPS navigation functions guide you from one tour stop to next. The app works offline, so no data plan is needed when traveling abroad.

Just down Brock Street from The Circus lies the Royal Crescent. This moon-shaped semicircular row of houses faces a sprawling lawn. The Crescent was built from 1767 to 1774 by John Wood, the Younger, who also completed The Circus. The Crescent is 500 feet long and contains 114 Ionic columns and many other decorative and distinctive moldings.

The buildings were originally only known as The Crescent, but "Royal" was added in the 18th century with Prince Frederick, Duke of York and Albany stayed here.

The original design called for 30 equally-sized townhouses, or terraced houses. Today, 18 have been split into various sized flats.

The Royal Crescent is a Grade I listed building. The stone facades of the houses appear much as they did when they were made.

The Crescent provides one of the most stunning views of Georgian architecture that Bath has to offer. With this captivating view of the greenspaces and The Circus in the distance, the Crescent was the first terraced houses built as "rue in urbe" or the country in the city.

If you'd like to see these buildings more up close, check out the Royal Crescent Hotel & Spa, located in No. 16.

No. 1 Royal Cresent is a museum. Here you'll find it preserved as a historic house, with rooms, furniture, pictures, and other items depicting Georgian life between 1776 and 1796. Among the fully furnished and appointed rooms you can tour, there is a Parlour, a Gentleman's Retreat, a Withdrawing Room, Servant's Hall, Kitchen, and Scullery.

Many plaques commemorate the notable and famous people who have stayed in the Crescent.

Originally called the King's Circus, The Circus was finished in 1768. The design was formulated by architect John Wood Sr., but he died during construction, and his son finished the project. The plaza consists of three large townhouse buildings, all forming a perfect circle at the meeting of Brock, Gay, and Bennett Streets. The name "Circus" comes from Latin and means a ring or circle.

John Wood Sr. was known for his appreciation of symbology. He admired the Druids and was convinced that Bath had been the hub of much Druid activity in Britain. As such, he studied Stonehenge and built The Circus with the same diameter. He also included many emblems in the design, with serpents, nautical symbols, acorns, and keys from masonic lore. In all, there are more than 525 pictorial emblems and symbols used. The entire design, when viewed from above, looks like a masonic key. A ley-line joins it to the Royal Crescent, which some believe represents the sun and the moon in their designs.

Many wealthy and famous have lived in The Circus over the years. Thomas Gainsborough lived here in the 1700s, and Nicolas Cage had a flat here for awhile. It's also said that if you wander the center plaza, you can find one precise point where all sound will echo.

The building is a Grade I listed building, and like many others in Bath, it is a fine example of Georgian architecture. Each level's facade is designed in a different classical order—Greek Doric, Roman Composite, and Corinthian.
Image Courtesy of Flickr and HarshLight.
3

Today, you can still visit the Upper Rooms and glory in their beauty. Don't miss the original Wayfarers crystal chandeliers. The Fashion Museum is also located in the Assembly Rooms and is well worth a visit. Be sure to admire all the Regency era dresses.

In Northanger Abbey, Catherine Morland often visits both the Upper Rooms and the Lower Rooms and dances the nights away in crowded rooms. Catherine Morland met Henry Tilney in the Lower Rooms, and Henry Tilney found the Master of Ceremonies to introduce them. Isabella Thorpe was affronted when James Morland asks for more dances without changing partners. These vignettes give insight into the different, more restrictive social norms of Regency England.
Image Courtesy of Wikimedia and shrinkin'violet.
4

The Paragon refers to the entire street of Georgian townhouses that were designed by Thomas Warr Attwood. The street itself is either Roman or medieval. This area was a Roman residential area in the first, second, and third centuries.

Jane Austen stayed at No. 1 The Paragon twice; it was her aunt's home. The first time was for a visit, and the second time she used the home as a base for finding her own residence. You can rent The Paragon as your accommodation as you trace Jane Austen's footsteps, and the footsteps and dance steps of her characters.
Image Courtesy of Wikimedia and Matt Prosser.
5

Camden Crescent is located just off Lansdown Road, the main route from the city center into the historic northern suburbs of Bath. The crescent stands on the edge of Margaret’s Hill, an impossibly steep slope that leads down to the A4 and the River Avon beyond. From the ornate railings opposite the main row of houses, visitors can expect a stunning view of the river below, following a brief if steep walk from the eastern edges of the city center. Camden Crescent appears to be perched almost precariously at the edge of the hill, and this perilous placement has lent it a unique architectural feature.

Designed in 1788 by John Eveleigh, Camden Crescent once descended slightly down the hill to the East. A landslide in 1889 caused nine houses to collapse at the eastern end of the crescent, and they were never replaced. As a result, the Grade I listed crescent remains uniquely lopsided. The central pillars, a common feature in symmetrical crescents, no longer sits in the middle of the crescent, but instead leans to the east, adding a quirky feel to this unusual crescent, well placed closer to town than more perfectly formed streets further along Lansdown Road.
Image Courtesy of Wikimedia and NotFromUtrecht.
6

Lansdown Crescent is one of the finest examples of Bath’s architectural trademark – the sweeping, impeccably preserved Georgian crescents dotted around the city’s Georgian suburbs. These crescents are located on the hills north of Bath’s historic city centre. Lansdown Crescent lies further afield than its more famous counterpart, the Royal Crescent, and requires a fifteen minute walk along a series of ever steepening roads from the city centre. When you arrive, however, the extra exertion proves to be worthwhile – as the crescent looks over a truly spectacular view of the city, nestled in the valley below.

Designed by renowned architect John Palmer, Lansdown Crescent was constructed during Bath’s boom years, and was completed in 1793. Comprising twenty houses, it is a Grade I listed building. The large spherical green lying next to the crescent of houses is, improbably enough, occasionally used for grazing sheep. Lansdown Crescent sums up Bath’s two sides – a hilly, isolated country town with a rich urban architectural history. The twin highlights of its sweeping façade and the view it looks onto make it a natural stop to a tour of the other Georgian architecture north of the city centre, including the Royal Crescent, the Circus and the nearby Somerset Place.
Image Courtesy of Flickr and wordmunger.
7

Somerset Place is one of many fine examples of Georgian architecture within the city of Bath. Less renowned than the nearby Royal Crescent, the crescent remains a jewel in the city’s impressive collection of Georgian streets and buildings. Somerset Place, collectively regarded as a Grade I listed building, is situated close to Bath Spa University, among the hills that lie to the north of the city centre. It is accessible from central Bath via a No. 2 bus, or a brisk uphill walk out of the city centre along Broad Street and Lansdown Road, following directions to the university campus.

Somerset Place is a sweeping crescent of adjoining Georgian town houses, designed by renowned architect John Eveleigh. Building work on Somerset Place began in 1790 but following Eveleigh’s bankruptcy was not completed until 1820. The buildings still maintain their original Georgian façade to this day, despite damage inflicted by German bombs during the Second World War. Today the buildings are largely used as student accommodation for the nearby university, and make a worthwhile addition to any walking tour of the elegant streets and crescents north of the city centre. Previously a part of the university campus, they are now privately owned.
Image Courtesy of Wikimedia and Rodw.