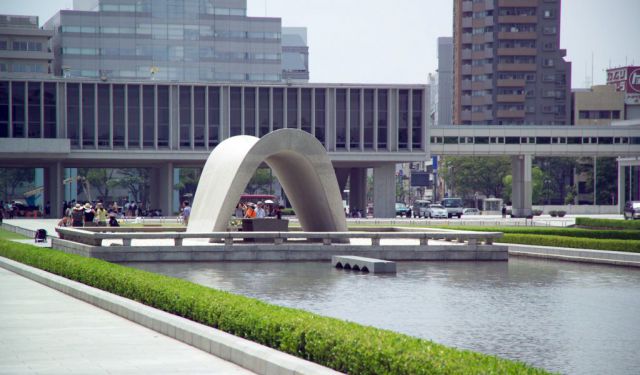 Hiroshima Peace Memorial Park is a memorial park in the center of Hiroshima. It is dedicated to the legacy of Hiroshima as the first city in the world to suffer a nuclear attack. Today, the city has a number of memorials and monuments, museums, and lecture halls, which draw over a million visitors annually. Take this tour to visit some of Hiroshima's most beloved monuments to peace.
Image Courtesy of Wikimedia and Fg2.
How it works: Download the app "GPSmyCity: Walks in 1K+ Cities" from iTunes App Store or Google Play to your mobile phone or tablet. The app turns your mobile device into a personal tour guide and its built-in GPS navigation functions guide you from one tour stop to next. The app works offline, so no data plan is needed when traveling abroad.

Image Courtesy of Wikimedia and Taisyo.
Sight description based on Wikipedia.
2

Near the center of Hiroshima Peace Memorial Park is a concrete, saddle-shaped monument that displays the names of all of the people killed by the bomb. The cenotaph carries the epitaph, "Rest in Peace, for the error shall not be repeated." Through the center of the monument you can see the Peace Flame and the A-Bomb Dome. The arch shape represents a shelter for the souls of the victims. Every year on August 6th, "A-bomb Day," the City of Hiroshima holds the Hiroshima Peace Memorial Ceremony to console the victims of the atomic bombs and to pray for the realization of lasting world peace. The ceremony is held in the morning in front of the Memorial Cenotaph, and many citizens participate, including the families of the deceased. During the ceremony, one minute of silence for the victims is observed at 8:15, the time of the atomic bomb's explosion.
Image Courtesy of Wikimedia and Taisyo.
Sight description based on Wikipedia.
3

Among the 400,000 people who were killed or exposed to lethal post-explosion radiation, at least 45,000 were Korean, but the number is uncertain, because the population has been neglected as the minority. Additionally, 300,000 survivors of Hiroshima and Nagasaki returned to Korea after liberation from the Japanese colonialism. The monument, beautified with Korean national symbols, is intended to honour Korean victims and survivors of the atomic bomb and Japanese colonialism.

Image Courtesy of Wikimedia and Fg2.
Sight description based on Wikipedia.
4

There are three Peace Bells in Hiroshima Peace Park. The smaller one is used only for the Peace Memorial Ceremony. When not in use, it is displayed in the east building of the Hiroshima Peace Memorial Museum. The most well-known Peace Bell consists of a large Japanese bell hanging inside a small open-sided structure. Visitors are encouraged to ring the bell for world peace, and the loud and melodious tolling of this bell rings out regularly throughout the park. The Peace Bell was built in 1964. The surface of the bell, designed by Masahiko Katori, is a map of the world, and the "sweet spot" is an atomic symbol. The inscriptions on the bell are in Greek, Japanese and Sanskrit. The inscription reads "Know yourself." The Greek embassy donated the bell to the Peace Park and picked out the most appropriate ancient Greek philosophical quote of Socrates.
Image Courtesy of Wikimedia and Fg2.
Sight description based on Wikipedia.
5

The Children's Peace Monument commemorates Sadako Sasaki and the thousands of child victims of the atomic bombing of Hiroshima. Designed by Japanese artists Kazuo Kikuchi and Kiyoshi Ikebe, the monument was built using money from a fund-raising campaign by Japanese school children, including Sadako's classmates. The main statue is entitled 'A-bomb Children' and was unveiled on May 5, 1958 (Children's Day in Japan). Sadako is immortalized at the top of the statue, where she holds a crane. Thousands of origami cranes from all over the world are left at the monument on a daily basis, and an ancient Japanese tradition holds that one who folds a thousand cranes can have one wish granted.
Image Courtesy of Wikimedia and Robert Atendido.
Sight description based on Wikipedia.
6

Hiroshima Peace Memorial, commonly called the Atomic Bomb Dome, is part of Hiroshima Peace Memorial Park and was designated a UNESCO World Heritage Site in 1996. The building serves as a memorial to the people who were killed in the atomic bombing of Hiroshima. Having slightly missed the original target (the distinctive "T"-shaped Aioi Bridge), at 8:15 on August 6, 1945, the first nuclear bomb to be used in war detonated almost directly above the dome (the actual center of the blast was 490 feet (150 m) away and 1,968 feet (600 m) above ground). As Hiroshima was rebuilt around the dome, it became a subject of controversy; some locals wanted it torn down, while others wanted to preserve it as a memorial of the bombing. In 1966 Hiroshima City decided to preserve the A-bomb Dome indefinitely. Funds were sought locally and internationally. To date, the A-bomb Dome has undergone two preservation projects.
Image Courtesy of Wikimedia and Kirk.
Sight description based on Wikipedia.

Hiroshima is a very green and picturesque city where areas of unspoiled natural beauty dot the steel-glass-concrete urban landscape. Hiroshima has an abundance of natural, cultural and historic landmarks to explore. Take this tour to discover Hiroshima's most noteworthy sights.