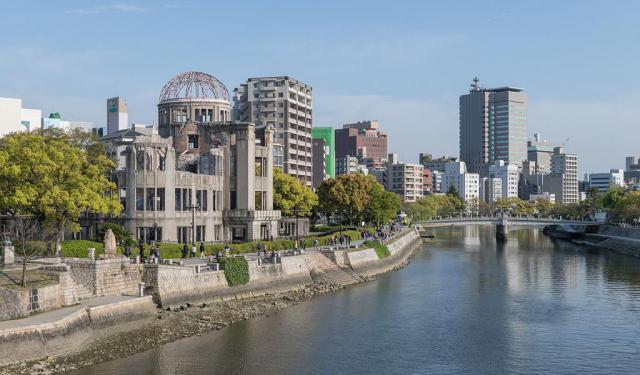 Hiroshima is a very green and picturesque city where areas of unspoiled natural beauty dot the steel-glass-concrete urban landscape. Hiroshima has an abundance of natural, cultural and historic landmarks to explore. Take this tour to discover Hiroshima's most noteworthy sights.
Image Courtesy of Wikimedia and DXR.
How it works: Download the app "GPSmyCity: Walks in 1K+ Cities" from iTunes App Store or Google Play to your mobile phone or tablet. The app turns your mobile device into a personal tour guide and its built-in GPS navigation functions guide you from one tour stop to next. The app works offline, so no data plan is needed when traveling abroad.

Hiroshima Peace Memorial, commonly called the Atomic Bomb Dome, is part of Hiroshima Peace Memorial Park and was designated a UNESCO World Heritage Site in 1996. The building serves as a memorial to the people who were killed in the atomic bombing of Hiroshima. Having slightly missed the original target (the distinctive "T"-shaped Aioi Bridge), at 8:15 on August 6, 1945, the first nuclear bomb to be used in war detonated almost directly above the dome (the actual center of the blast was 490 feet (150 m) away and 1,968 feet (600 m) above ground). As Hiroshima was rebuilt around the dome, it became a subject of controversy; some locals wanted it torn down, while others wanted to preserve it as a memorial of the bombing. In 1966 Hiroshima City decided to preserve the A-bomb Dome indefinitely. Funds were sought locally and internationally. To date, the A-bomb Dome has undergone two preservation projects.
Image Courtesy of Wikimedia and Kirk.
Sight description based on Wikipedia.
2

Originally built in 1932, Aioi Bridge is one of the most renowned landmarks in Hiroshima and has a distinctive "T" shape since undergoing reconstruction in 1983. Parts of the old bridge bearing signs of the atomic disaster are preserved at its base, while some pieces are on display at the Hiroshima Peace Memorial Museum. This bridge is believed to be the original target of the atomic bomb.
Image Courtesy of Flickr and tony cassidy.
3

Hiroshima Peace Memorial Park is dedicated to the legacy of Hiroshima as the first city in the world to suffer a nuclear attack, as well as to the memories of the bomb's direct and indirect victims (of whom there may have been as many as 140,000). The park is located in what was once the city’s busy downtown commercial and residential district. The park was built on open field that was created by the explosion. Today there are a number of memorials and monuments, museums, and lecture halls in this area, which draw over a million visitors annually. The annual August 6th Peace Memorial Ceremony, sponsored by the city of Hiroshima, is also held in the park. The purpose of Peace Memorial Park is not only to memorialize the victims, but to establish a reminder of the horror of nuclear war and to advocate world peace.
Image Courtesy of Wikimedia and Taisyo.
Sight description based on Wikipedia.
4

Image Courtesy of Wikimedia and Taisyo.
Sight description based on Wikipedia.
5

The Hondori Street Shopping Arcade is Hiroshima’s main shopping area. It is a busy and stylish covered street mall. Here you can find anything from clothing and jewelry to gifts and souvenirs. It is a great place to shop or to just browse.
Image Courtesy of Flickr and Jake Keup.
6

The Hiroshima Children's Museum is a science museum for children. The museum opened in the new building of the Hiroshima City Children's Library in 1980. The museum offers the following exhibits: Exploration Hall, Dreamland of the Sky, Dr. Scitech's Happy Laboratory, Science of Astronomy, and the theater Apollo Hall, which hosts concerts, plays, musicals and other events.

Image Courtesy of Wikimedia and Taisyo.
Sight description based on Wikipedia.
7

7) Hiroshima Museum of Art (must see)

The Hiroshima Museum of Art was built to honor the memory of the atomic bomb attack. It houses a permanent exhibition of such famous French impressionists as Cezanne, Renoir, Picasso, Van Gogh and others, which are displayed in four galleries. You can also find about one hundred pieces by modern Japanese artists.

The Memorial Cathedral of World Peace is a symbol of peace at the location of the world's first atomic bombing. The cathedral was built by German parish priest Hugo Lassalle who miraculously survived the bombing. The pope also lent his support. The architectural design of the cathedral incorporates many Japanese elements. The facade and the interior are styled in a solemn manner so that it resembles a memorial.
Image Courtesy of Wikimedia and Wiiii.
9

Shukkei-en is a historic Japanese garden in the city of Hiroshima. Construction began in 1620 during the Edo period by order of Asano Nagaakira, daimyo of the Hiroshima Han. The seventh lord of the Han summoned an expert in the construction of Japanese gardens from Kyoto who helped reconstruct Shukkei-en. Since the Meiji period, the garden served as the villa of the Asano family. Under Emperor Meiji, the Imperial General Headquarters were relocated to Hiroshima, and the emperor briefly lodged at the villa. The gardens were then opened to the public, and in 1940 the Asano family donated them to Hiroshima Prefecture. The garden is just a short distance from Ground Zero of the nuclear attack on Hiroshima. It suffered extensive damage during the bombing and later became a refuge for victims of the war. After renovations, it reopened in 1951.
Image Courtesy of Wikimedia and fg2.
Sight description based on Wikipedia.
10

The Hiroshima Prefectural Art Museum was established in 1968 and rebuilt in 1996. It is located near the picturesque Shukkei-en Gardens in downtown Hiroshima. The museum is famous for its permanent exhibition of about 3,400 pieces of modern European art, including renowned items by Picasso and Salvador Dali. The museum also hosts pieces by local artists.

Hiroshima Castle (Carp Castle) Park is located right in the heart of the city and is one of Hiroshima's most beautifully landscaped parks. Built in the 1590s, the park and the castle were destroyed during the atomic bombing in 1945. This complex was rebuilt in 1958. It is surrounded by a wide ditch full of water that forms a natural barrier to the castle.
Image Courtesy of Flickr and rileyroxx.
12

Hiroshima Castle Park hosts another surprise for travelers- the Imperial General Headquarter Ruins. The ruins are the stone foundations of the former military barracks that were destroyed during the bombing in 1945. Right next to the ruins, you can find the remains of a concrete bunker from where the first radio broadcast was held after the disaster.
Image Courtesy of Flickr and jfeuchter.
13

The original shrine was built in 1868, the first year of the Meiji period, in Futabanosato Hiroshima. The shrine was established to mourn the Hiroshima-Han victims of the Boshin War. In 1934 it was dismantled and moved to where Hiroshima Municipal Stadium now stands, and in 1939 its name was changed to the Hiroshima Gokoku Shrine. In 1945 it was destroyed by the atomic bombing and was rebuilt within Hiroshima Castle in 1965 with the aid of donations from the citizens of Hiroshima. The Hiroshima Gokoku Shrine is one of the most popular places for celebrating Hatsumode and Shichi-Go-San in Hiroshima.
Image Courtesy of Flickr and mdid.
Sight description based on Wikipedia.
14

Originally constructed in the 1590s, the castle was destroyed in the 1945 atomic bombing of the city. A replica of the original was built in 1958 and now serves as a museum of Hiroshima's history prior to World War II. An excellent example of a hirajiro or flatlands (plains) castle, Hiroshima Castle once had three concentric moats and a natural barrier in the Otagawa River to the west (now called the Hongawa). The two outer moats were filled in during the late 19th and early 20th centuries, and much of what was once within the castle grounds is now a modern urban area with homes, schools, offices and shops. There were once a number of secondary castle buildings, including towers and turrets. A Shinto shrine, called Hiroshima Gokoku Jinja, is located within the innermost moat, having been moved there after 1945.
Image Courtesy of Wikimedia and Taisyo.
Sight description based on Wikipedia.

Hiroshima Peace Memorial Park is a memorial park in the center of Hiroshima. It is dedicated to the legacy of Hiroshima as the first city in the world to suffer a nuclear attack. Today, the city has a number of memorials and monuments, museums, and lecture halls, which draw over a million visitors annually. Take this tour to visit some of Hiroshima's most beloved monuments to peace.