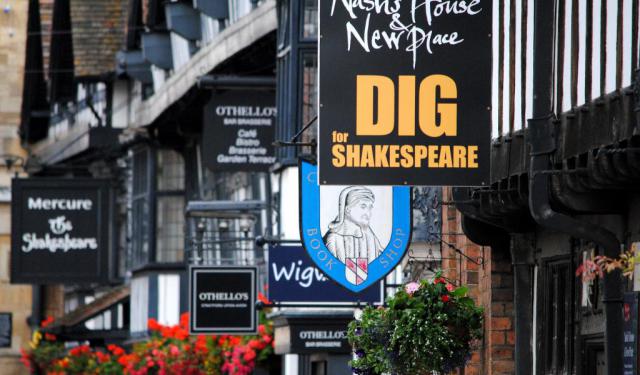 Image by Rept0n1x on Wikimedia under Creative Commons License.

Stratford-Upon-Avon is William Shakespeare's hometown, and also the place where he passed away. Many period buildings and locations, related to his and his family's life, are preserved as Britain's national heritage. The most popular attractions are the Tudor period Shakespeare's Birthplace House and his beautiful burial place at the Holy Trinity Church.
How it works: Download the app "GPSmyCity: Walks in 1K+ Cities" from iTunes App Store or Google Play to your mobile phone or tablet. The app turns your mobile device into a personal tour guide and its built-in GPS navigation functions guide you from one tour stop to next. The app works offline, so no data plan is needed when traveling abroad.

Shakespeare's Birthplace is a restored 16th-century half-timbered house, where it is believed that William Shakespeare was born in 1564 and spent his childhood years. It is now a small museum open to the public and a popular visitor attraction, owned and managed by the Shakespeare Birthplace Trust. It has been referred to as "a Mecca for all lovers of literature".

The Birthplace recreates a picture of family life at the time of Shakespeare complete with period domestic furnishings, a glass window inscribed with the signatures of visitors to the house over the centuries, and John Shakespeare's glove making workshop.

The walled garden at the back of the house has been specially planted with flowers and herbs that would have been known at Shakespeare's time.


Image by ell brown on Flickr under Creative Commons License.
Sight description based on wikipedia
3

The Nash House stands right next door to Shakespeare's New Place, on which stood the house where William Shakespeare spent his last living days. The house belonged to the first husband of the poet's granddaughter, Elizabeth. The classical Tudor-period building is now a museum in Stratford, tracing lineage from the earliest settlers on the banks of the River Avon until the time of Shakespeare, and it features period furnishing, tapestries and engravings.

New Place is the name of William Shakespeare's final place of residence, before his death in 1616. Though the house no longer exists, the land owned by the Shakespeare Birthplace Trust houses an attractive garden with sculptures and various interesting planting spaces (including a traditional knot garden), plus an exhibition located in Nash House which sits next door to the site.

Upon entering, be sure to listen to the guide who reviews the history of this property for about 15 minutes. The story is very important to this site. Shakespeare was associated with London for much of his life, and tradition states that he retired to Stratford in his later years, though he still visited London as late as 1614. He bought the house in 1597 but didn't move into it until 1610.
Image by Steve F on Wikimedia under Creative Commons License.
Sight description based on wikipedia
5

The Grammar School was originally the site of Brethren of the Guild, an influential religious organization that lost its powers after the Church Reformation during the reign of Henry the VIIth. Meanwhile, the 1428 Tudor building became Stratford's Grammar School, where William Shakespeare studied. The classrooms are on the upper floor. They are kept in the original state, with authentic interiors and furnishings. One of the classrooms bears a memorial plaque, stating that Shakespeare studied in that particular room. Currently, the building belongs to the King Edward VI Grammar School.
Image by ethantw on Flickr under Creative Commons License.
6

Hall's Croft was owned by William Shakespeare's daughter, Susanna Hall, and her husband Dr John Hall whom she married in 1607.

The building now contains a collection of 16th and 17th century paintings and furniture. There is also an exhibition about Doctor John Hall and the obscure medical practices of the period. The property includes a dramatic walled garden which contains a variety of plant life that John Hall may have used in his treatments. John and Susanna Hall later moved to New Place, which William Shakespeare left to his daughter after his death.
Image by Kev747 on Wikimedia under Creative Commons License.
Sight description based on wikipedia
7

7) Collegiate Church of the Holy and Undivided Trinity (must see)

The Collegiate Church of the Holy and Undivided Trinity is a Grade I listed parish church of the Church of England. It is often known simply as Holy Trinity Church or as Shakespeare's Church, due to its fame as the place of baptism and burial of William Shakespeare. More than 200,000 tourists visit the church each year.

The church has a large three manual pipe organ which dates from 1841 by the organ builder William Hill. It has undergone several restorations by Hill Norman and Beard, and Nicholson. A specification of the organ can be found on the National Pipe Organ Register.

The church is open to visitors for much of the year. A small contribution is requested to access the chancel and sanctuary in which Shakespeare is buried. Holy Trinity is a member of the Greater Churches Group. The Royal Shakespeare Company performed Henry VIII in the church in 2006 as part of the Complete Works Festival. It is an active parish church serving a parish of some 17,000 people.

William Shakespeare, poet and playwright, was baptised in Holy Trinity on 26 April 1564 and was buried there on 25 April 1616.