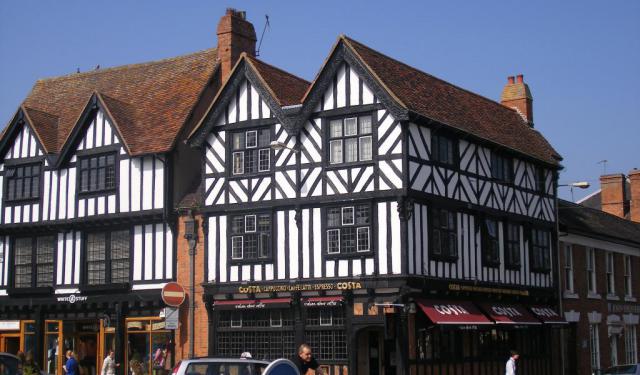 Image by amandabhslater on Flickr under Creative Commons License.

Stratford-Upon-Avon is an old medieval market town with a great history, and it was founded in the middle of the 12th century. As it is Shakespeare's hometown, you'll find it filled with period houses of the Tudor period. Many of them have been kept in their original state, since the 16th century, and their classic black and white appearance marks the Tudor architectural tradition.
How it works: Download the app "GPSmyCity: Walks in 1K+ Cities" from iTunes App Store or Google Play to your mobile phone or tablet. The app turns your mobile device into a personal tour guide and its built-in GPS navigation functions guide you from one tour stop to next. The app works offline, so no data plan is needed when traveling abroad.

Harvard House is owned by the Shakespeare Birthplace Trust (SBT). It was built in 1596 by Thomas Rogers, grandfather of the benefactor of Harvard University, John Harvard, and was the home of Harvard's mother.

Harvard House became the Museum of British Pewter after the donation to the SBT of the Neish Pewter Collection in 1995, and includes items ranging from Roman times to the 1930s, but has a strong core of 16th- and 17th-century pewter.

Image by M_Eriksson on Flickr under Creative Commons License.
Sight description based on wikipedia
2

The Garrick Inn is known as the oldest standing pub in Stratford-Upon-Avon. A traditional half-timbered Tudor-period house, painted in black and white, the inn was said to have been established in the 14th century. The inside décor is authentic, with original beams and wood features kept in good condition. The pub was named after David Garrick, a famous actor who starred in Shakespeare's plays. The Garrick Inn is located on High Street, and whilst standing next door to the famous Harvard House, both black and white houses do blend in.
Image by ell brown on Flickr under Creative Commons License.
3

The picturesque Mercure Shakespeare Hotel is a another Tudor-period house, which dates back to the 16th century. Located at Capel Street, the building's facade is traditionally painted in black and white and all of the street frontage part of the hotel is kept in its original state. The gabled building has a Grade 1 listing and is of national architectural and historical interest.
Image by ell brown on Flickr under Creative Commons License.
4

The three-story timbered Falcon Hotel is a quintessential 16th century Tudor-period inn, located at the corner of Chapel Street and Scholars Lane. The traditional Tudor black and white historic building is carefully restored and is Grade 1 listed. The location served as a town residence and an inn for a few centuries.
Image by veggiefrog on Flickr under Creative Commons License.
5

The Guild Chapel, located at the corner of Chapel Lane and Church Street, towers over the old and crouching houses of Stratford. The beautiful Gothic chapel was founded in the middle of the 13th century by brethren of the Guild of the Holy Cross. After the 16th century's Church Reformation, the brethren had lost its influence and authority. Certain parts of the chapel's walls still stand, from when it was first built. The nave and the tower were added in the 15th century. While playing an important part in Stratford's social life, the chapel also served as a permanent place of worship for the residents of the grammar school next door.
Image by Edi Weissmann on Flickr under Creative Commons License.
6

King Edward VI School is a boys grammar school and academy. It is generally believed that William Shakespeare attended this school, leading to the label of "Shakespeare's School".

Given the age of the school it is not surprising to find a wide variety of architectural styles on the site ranging from the fifteenth-century Guildhall to the Denis Dyson science building opened in 2008. The historic part of the school is still used.

The ground-floor of the Guildhall, where the town council of Shakespeare's time met and where travelling players performed - the holes for the rods to hold the temporary stage are still visible - is currently used as a library. On the first floor the old Council Chamber, known since Victorian times as "Big School", is the room in which William Shakespeare is believed to have been taught and is still used for teaching.

The building known as Pedagogue's House across the courtyard currently houses the school office, the offices of the Headmaster, the two deputy headmasters and the School Archive. Pedagogue's House, first built in 1427 and believed to be the oldest half-timbered schoolroom in England, is attached to the Old Vicarage where the Headmaster lives. Adjacent to the school site is the Guild Chapel, founded by the medieval Guild of the Holy Cross and now owned by the Stratford-upon-Avon Town Trust.


Image by Circle of Guillim Scrots on Wikimedia under Creative Commons License.
Sight description based on wikipedia
7

The Brass Rubbing Center is a unique Tudor experience. The Center has a wide collection of medieval and Tudor-period brasses and an archive of patterns of various designs, all available for making a personal rubbing for your own use. The quick and informative instruction will allow visitors to make a brass rubbing, depicting traditional themes of knights, ladies, social customs and various social scenes.
Image by amandabhslater on Flickr under Creative Commons License.