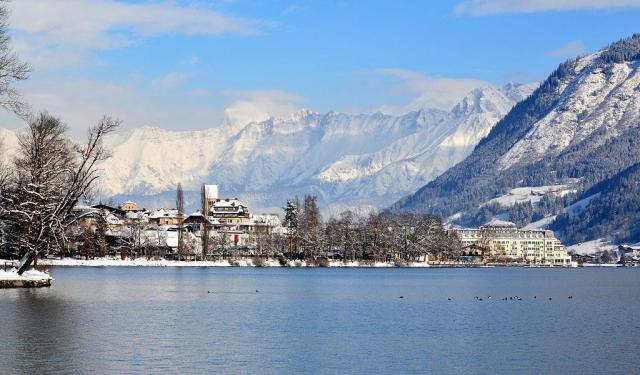 Image by Wald1siedel on Wikimedia under Creative Commons License.

Zell am See, which translated from German means "Zell by the lake," is one of the most picturesque towns in Austria. Located at the shore of Zeller Lake, the town is a famous ski destination in wintertime, and equally visited in summertime for hiking and fabulous sights. Zell am See is one of the oldest settlements in Bavaria, founded around 740 A.D. and preserving some medieval-era landmarks. Follow this orientation walk to explore the main attractions of idyllic Zell.
How it works: Download the app "GPSmyCity: Walks in 1K+ Cities" from iTunes App Store or Google Play to your mobile phone or tablet. The app turns your mobile device into a personal tour guide and its built-in GPS navigation functions guide you from one tour stop to next. The app works offline, so no data plan is needed when traveling abroad.

The other towering feature of the old area of Zell am See is the Vogt tower, which is also a local history museum and the office of the county's archives. The tower is said to be about 1000 years old, first mentioned in 926 as an escape tower for solders and citizens of Zell. It is also the oldest building in the town. It's sometimes called Kastnerturm, as it was acquired by the businessman Johann Kastner in 1866. Today, behind the very thick walls, there are four floors of over 2500 items of local heritage, like traditional costumes, furniture and handicrafts. There is also information regarding the evolution of the entire region, the lake, the Alps and the surrounding fauna.

Editor's Note: After renovations in 2019, the expanded and redesigned museum will be open to the public again by 2020 at the latest.

Image by Leon Reed on Flickr under Creative Commons License.
2

District Council Office, located on the Stadtplatz, was built before 1500, and at the time was owned by the Panichner family. In the 17th century, the Gothic building was the administrative centre for the rural judges. Between 1841 and 1848, the building was completely redesigned. In the 20th century, it came into the federal government's possession. The entrance hall is decorated with the Pinzgauer Municipality coat of arms. In front of the District Council Office was the Town Fountain, founded in 1855 by Archbishop Wolf Dietrich von Raitenau and removed in 1894 when the water pipes were constructed. It was brought back in 1954 with help of local donations. The fountain's side panels depict important historical events of Zell am See.
Image by Andrew Bossi on Wikimedia under Creative Commons License.
3

Hotel Lebzelter is as much as a landmarks of the Zell am See as its neighbor the Vog Tower, mostly for its striking yellow color and traditional decoration of an Austrian chalet. As it's located strategically at the junction of Stadtplatz and Dreifaltigkeitsgasse Lane, it became a hallmark of Zell and one of the mostly photographed buildings in town. Hotel Lebzelter is a historic 18th century building, first mentioned as guest house in 1482.

Within the landmark hotel Lebzelter, is located Sportstüberl - a sports themed place and a popular après-ski. Sportstüberl offers an authentic and warm atmosphere, where locals and tourists gather for a beer or hot meal.

Image by Jens Petersen on Flickr under Creative Commons License.
4

Ginhouse is a nice chill-out spot to start the night. The heavy wooden corner street door will lead you to a very cozy bar, very woody, with lots of nostalgic sports-themed decorations, including a nice football table. They have an open patio for summer and the indoor area is always in full swing, serving every variety of gin and a number of expertly prepared cocktails. Ginhouse is the very place to go and warm up après-ski and enjoy a pint with friends.
Image by bortescristian on Flickr under Creative Commons License.
5

The former Rosenberg Castle is located in the center of Zell am See and today is the seat of the mayor and city council (Rathaus). The Castle was built in 1583 by two tradesmen, brothers Karl and Hans Rosenberg. Through the centuries, it was owned by Rosenberg's descendants, then resold several times, being at times, besides a private residence, also a beer brewery and a college. The last private owner was Franz Lürzer, in 1820. In 1842 it became federal property for various seats and offices. In 1970, it became the Town Hall. The castle's architecture is typical for residences in the Salzburg region: a four-story chalet, with quadratic foundations, slated roof, four corner towers and one at the center, a truly Austrian sight.
Image by Leon Reed on Flickr under Creative Commons License.
6

The Ferry Porsche Congress Center (FPCC) is the multifunctional convention center, completed in 2007, named after the Zeller Freeman Ferry Porsche company. The building was designed by two German architecture bureaus: Perler and Scheurer, and Giesecke and Schetter. The Porsche Congress Center is quite a striking sight in the idyllic town among the Austrian Alps through its minimalistic, light aesthetics and unusual architecture. The structure took form of two intersecting blocks, which mirrors the typical arrangement of Zell's streets and squares, and presents a single, homogeneous picture. The center often hosts concerts, vernissages and various art exhibitions.
Image by Herbert Ortner on Wikimedia under Creative Commons License.
7

The parish church of St. Hyppolitus is the symbol of Zell-am-See's old town and is the oldest church in the Pinzgau municipality, with its first mention dating back to the 13th century. This impressive medieval structure features Romanesque style, yet with Gothic transformations and additions that were placed over the centuries. The church has three naves and used to have a Gothic vault, which in 1898 was replaced by a flat wooden ceiling. The gem of the church, which is also one of the most beautiful and precious monuments of the region, is the church's gallery with its magnificent balustrade. The gallery is based on four different pillars carved from selected precious marble. The arched Gothic decorations feature carved figures of St. Hippolytus and Florian. The walls are decorated with original frescoes from the 14th to 17th centuries. The most recognizable feature is the church's dominating tower. It is 36 meters high and is decorated with a gabled roof and various Gothic friezes.
Image by Leon Reed on Flickr under Creative Commons License.
8

Elisabeth-Promenade is a sightseeing walk along Zeller Lake, very picturesque, where taking quiet strolls and enjoying the view is what draws so many tourists to this place. This promenade, along with a park, also has a small music pavilion where the local orchestra plays improvised holiday concerts. The walk begins somewhere from the junction of Aphotekergasse and Salzmannstrasse, and goes south to the Schüttdorf village, passing by the Zell am See train station.
Image by Yousaf Niazi on Flickr under Creative Commons License.
9

The Grand Hotel is one of the most prominent landmarks in town, being the most prestigious destination during the Belle Epoque. The distinctive elongated building is visually remarkable, mainly for its snow-white facade and mansard roof. It was built between 1894 and 1896, on the most unique spot of the entire Zeller shore, on a private peninsula, offering breathtaking panoramic views of the lake and mountains. At the end of World War II, the Grand Hotel was occupied by US forces for about ten years. Then, following reconstruction, the hotel became again a very popular destination, also featured in several European films as a set. In the 1980s, the Grand Hotel was remodeled and brought to its present look, designed in and out in the spirit and tradition of refined Austrian hotel culture.
Image by Holger.Ellgaard on Wikimedia under Creative Commons License.
10

The Austria Fountain is the probably the best-kept secret in Zell am See. Located in the courtyard of the Grand Hotel, this landscape installation is the work of the famous contemporary Austrian artist Friedensreich Hundertwasser. The idea of the fountain was born in 1996 and installed here only in 2003. Hundertwasser dedicated the fountain to the provinces of Austria, where every one of the nine columns represents one particular province. The height of each column expresses the number of inhabitants of each province, and the colors are used in proportion as they are used in each coat of arms. The fountain is worth a visit for its unusual shape and the famous artist behind it.
Image by Holger.Ellgaard on Wikimedia under Creative Commons License.
11

Stadtpark is located on the waterfront of Zeller Lake. It is a perfect place for a stroll and relaxation. Small but nice, it features a nice promenade along the lake, shaded paths, several border-side cafe tables to enjoy the view and coffee, a well-equipped children playground called "children's land," and further north, the town's beach, where locals and tourists enjoy sunbathing and swimming.
Image by www.compassrosegalleries.com on Flickr under Creative Commons License.

Create Your Own Walk in Zell am See

Creating your own self-guided walk in Zell am See is easy and fun. Choose the city attractions that you want to see and a walk route map will be created just for you. You can even set your hotel as the start point of the walk.

Kaprun is a small alpine village in the district of Zell-am-See. Located at the foot of the Kitzsteinhorn Glacier, it brings thousands of tourists to enjoy skiing, hiking and the famous Mooserboden reservoir. Yet there are also well-known landmarks located within a short distance of the center of Kaprun, like Kparun Castle, St. Margaret Church and Sigmund Thun Gorge. A must is to visit Vötters...  view more