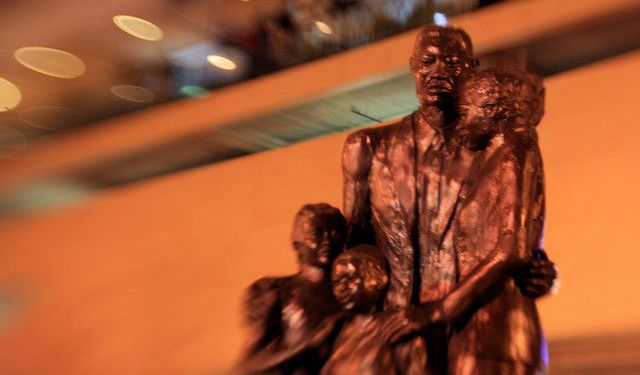 Image by quinn.anya on Flickr under Creative Commons License.

The majority of the population in Savannah is African-American. They make up approximately 60 percent of the residents of the city. And, of course, their importance in Savannah's history is enormous. They have left a great heritage in culture, politics and art. Don't miss the chance to visit such significant places as the Ralph Mark Gilbert Civil Rights Museum and St. Phillips Monumental AME to learn more about the history of the South!
How it works: Download the app "GPSmyCity: Walks in 1K+ Cities" from iTunes App Store or Google Play to your mobile phone or tablet. The app turns your mobile device into a personal tour guide and its built-in GPS navigation functions guide you from one tour stop to next. The app works offline, so no data plan is needed when traveling abroad.

The building is furnished in a style typical of a black residence in the 1890s. The cottage was originally built in another area in 1896 by W.W. Aimar, and features gingerbread-style adornment on the porch in a distinctive wheel and spindle pattern. It was threatened by demolition in 1970, but the City of Savannah and Historic Savannah Foundation managed to save the historic building, move it to its current location, and re-construct it.

The museum's exhibits demonstrate the history of Savannah and the Sea Islands, emphasizing the many ways that African-Americans have contributed to the area's history. One of the exhibits is particularly noteworthy- an original bill of sale for slaves, handwritten in Arabic by slaves on a plantation. Outside, the Cottage features the fountain “Free to Fly,” by famous sculptor Ivan Bailey, and a gas light dedicated to key civic leader Sadie Steele.

Image by TW Collins on Flickr under Creative Commons License.
2

The Beach Institute it owned and operated by the King-Tisdale Cottage Foundation. It was originally constructed in 1867 by the Freedmen's Bureau for the purpose of educating newly freed former slaves. It was named for the editor of The Scientific American, Alfred S. Beach, who was a major donor of the funds used to purchase the plot the Institute sits on.

Initially, the Institute has six hundred students, nine (primarily white) female teachers, and one male principal. The Beach Institute served as a school for freed slaves until 1875, when it was turned over to the Savannah Board of Education and became a free public school for African-American children. When other schools in the area opened and the Beach Institute was no longer needed, it was closed in 1919. Since then, it has been re-opened as an African-American cultural center and museum.

Works from Savannah-area African-American artists are on permanent display at the Beach Institute, including wood carvings from celebrated folk artists Ulysses Davis. Davis was a barber and self-taught sculptor, who made many of the tools he used to carve his artwork. Originally, his carvings were on display around the walls of his barber shop. Today, they're viewed by visitors from all over.

A key part of the forces that fought in this attack were Haitians of African descent. After the unsuccessful attack was concluded, many of these soldiers were sent off to fight other battles. Not many returned, and those who did often didn't see their homes until years later. The soldiers who returned became instrumental in winning Haiti's independence.

Stories of the contribution of these Haitian soldiers to American independence isn't encountered very frequently in history books, but that doesn't make it any less significant. The unit of Haitian soldiers who fought in the American Revolution was “Les Chasseurs Volontaires de Saint Domingue” serving under Charles Henri d'Estaing, and was the largest unit of soldiers of African descent. All of the members were free men who volunteered to fight the British.

The Haitian Memorial Monument was sculpted by James Mastin. One of the figures, a drummer, is a sculpt of Henri Christophe. He was a key figure in the fight for Haitian independence, serving as commander of the Haitian army. After the war was won, he became the King of the newly-independent Haiti.
Image by TheatricAL 03 on Flickr under Creative Commons License.
4

First Bryan Baptist Church has the distinction of being the oldest continually functioning Baptist church for African-Americans. It is based on a congregation that started in 1784, by Andrew Bryan, a member of George Leile's congregation.

The building was designed by John B. Hogg, and built between 1873-1888 on the site of the original church. It features stained glass windows that depict the church's founding members, including its first pastor, Andrew Bryan. Bryan was a Savannah slave who first organized the church in 1788. Later, in 1793, Bryan purchased both his freedom and the site of the church (formerly part of a Yamacraw Indian village) for thirty pounds. Two years after that, the first church building was built. In 1873, the first one was razed to make room for Hogg's design.

Bryan had a difficult time being a preacher. Before the church was built, he had to keep his congregation on the move. Many whites at the time viewed any gathering of slaves as a possible uprising, so Bryan was frequently imprisoned, and even beaten to punish him for preaching. Despite this, Bryan built his church and continued preaching until his death. Today, the First Bryan Baptist Church continues to serve the community as a place of worship for Savannah's Baptists.
Image by echiner1 on Flickr under Creative Commons License.
5

Savannah, Georgia, is an area with a rich and fascinating history in the civil rights movement. This museum is named after Dr. Ralph Mark Gilbert, a major figure in Georgia's civil rights history, and pastor of the First African Baptist Church. In the year 1942, Gilbert organized Savannah's branch of the National Association for the Advancement of Colored People, and has been referred to as the “father of Savannah's modern day Civil Rights Movement.”

The museum itself was built in 1914, and once served as the largest bank for African-Americans in its county, back when segregation governed virtually every public and private place in the deep South. After being a bank, it became the headquarters for Savannah's branch of the NAACP. Today, the museum houses historic photographs, art, and archives relating to Georgia's civil rights history. The first floor is created to be a replica of the luncheon in Levy's Department Store, a segregated lunch counter where one of the most famous sit-ins of the civil rights era occurred. In addition to the museum, the building also houses lecture halls, classrooms, and a library of African-American and civil rights books.

Tip:
Consider taking the guided as it gives better insight in less time than trying to read through everything on your own.

When a storm demolished the original church building in late summer of 1896, the congregation was forced to use the Odd Fellow's Hall until they were able to rebuilt. When it was, a General Conference meeting in 1897 chose to rename the church St. Phillip's Monumental A.M.E. Church. Later, in 1961, the Church moved to its current location.

The church contains plaques commemorating all of its ministers, with their names and dates of service. These include Reverends B.S. Hannah, who equipped the parsonage with gas radiators; D.W. Stephens, who laid the second group of historical tablets; C.W. Davis, who doubled the church's membership and eliminated its debts; and Frederick D. Jaudon, an important social activist known as “The Walking Preacher.”

Throughout its history, St. Phillip's Monumental AME Church has been a vibrant and active force in its community. Even when the church was demolished and the congregation was scattered, the members that remained in the area continued to work hard to preserve their congregation. Today, the building that the congregation calls home stands as a testament to their devotion and dedication.
Image by james.thompson on Flickr under Creative Commons License.
8

Laurel Grove Cemetery is located in midtown Savannah, on a portion of what used to be the Springfield Plantation, and is an important stop for any visitor interested in Civil War history. It was named for its location, in a lovely grove of native laurel trees, and came into being as other cemeteries in the area began to run out of room.

The cemetery opened up in 1853, and has seen several notable burials between then and now. Stephen Elliott, the 37th Bishop of the Episcopal Church in the U.S., is buried there, as are Juliette Gordon Low, founder of the Girl Scouts of the U.S.A., “The Waving Girl” Florence Martus, Confederate General Lafayette McLaws, and countless Georgian Senators, Representatives, and other politicians. Both Laurel Grove North and South are open to the public, and maintained as park-like historical and cultural monuments.
Image by moultriecreek on Flickr under Creative Commons License.

Remarkable and conspicuous Catholic, Baptist, Lutheran, Presbyterian, Unitarian and Methodist Churches dot the cityscape of Savannah and are interesting places to visit. You you may even have the chance to take part in parish services that are held weekly. Don't miss the opportunity to enjoy the wonderful architecture of Savannah's religious buildings and the peace that a church service...  view more