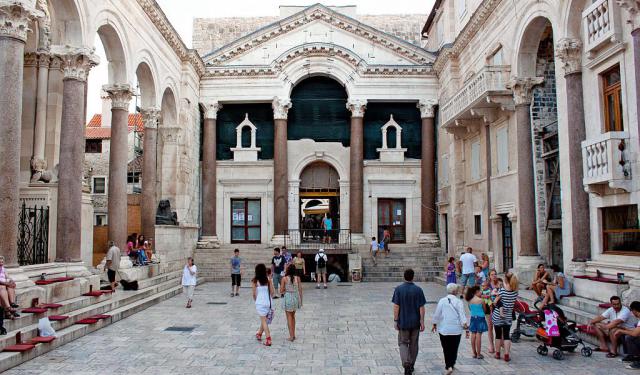 Image by Minestrone on Wikimedia under Creative Commons License.

Diocletian's Palace was built at the beginning of the 4th century A.D., by the Roman Emperor Diocletian. Inside its walls, you'll not only find antiques, but also elements familiar with medieval, Renaissance, and Baroque time periods. The palace is the world's most important architectural building as listed by UNESCO in World Cultural Heritage.
How it works: Download the app "GPSmyCity: Walks in 1K+ Cities" from iTunes App Store or Google Play to your mobile phone or tablet. The app turns your mobile device into a personal tour guide and its built-in GPS navigation functions guide you from one tour stop to next. The app works offline, so no data plan is needed when traveling abroad.

Gregory of Nin (Croatian: Grgur Ninski) was a medieval Croatian bishop of Nin who strongly opposed the Pope and official circles of the Church and introduced the national language in the religious services after the Great Assembly in 926, according to traditional Croatian historiography. Until that time, services were held only in Latin, not being understandable to the majority of the population. Not only was this important for Croatian language and culture but it also made Christianity stronger within the Croatian Kingdom.

The statue of Gregory of Nin by Ivan Meštrović in Split is a heavily trafficked tourist site in the town, which the toe of the statue shows. Rubbing the statue's toe is said to bring good luck. The statue was originally located in the Peristyle of Diocletian's Palace and can be seen in postcards of the pre-World War II period. During WWII, the statue was moved outside the city by Italian occupying forces. Currently, the statue sits to the north of the Palace and Old Town of Split, just outside the Golden Gate. There are also statues of Gregory of Nin in the cities of Nin, Croatia and Varaždin, Croatia.

Why You Should Visit:
Huge sculpture, almost 30 feet high and supposedly you rub the toe for good luck (one for the foot fetishists!) but really, it is better to appreciate this striking work from a bit of a distance.


Image by Stefdn on Wikimedia under Creative Commons License.
Sight description based on wikipedia
2

The Church of Saint Martin is situated by the Golden Gate of the Diocletian Palace. The building was a passage for watchmen of the palace in the 9th century, but transformed into a church and provided certain ammenties such as a settlement for nuns (which dates as far back as the 14th century).
Image by Ted Drake on Flickr under Creative Commons License.
3

Carrarina poljana is a large square situated to the north-east of Diocletian Palace. The square demonstrate a typical Mediterranean groups of houses. The old homes offer cafes as well as summer plays during the Split Festival.
Image by Flavio Chaves under Creative Commons License.
4

Papalic Palace (Papaliceva Palaca) is a Gothic inspired by palace designed by Juraj Dalmatinac in the 15th century. The museum is located on the first floor of the building. Over one portal you can see the Papalic family's coat of arms. Here you will find a lot Split's history, including artifacts and a variety of sculptures dating from the Diocletian times.
Image by Roger under Creative Commons License.
5

5) Cathedral of St. Domnius (must see)

The Cathedral of Saint Domnius, known locally as the Saint Duje, is the Catholic cathedral in Split. It is the seat of the Archdiocese of Split-Makarska, headed by Archbishop Marin Barišić. The cathedral was named after Saint Duje (Saint Dujam, or Saint Domnius) patron saint of Split, who was a 3rd century Bishop of Salona.

The Cathedral is composed of three different sections of different ages. The main part is Emperor Diocletian's mausoleum, which dates from the end of the 3rd century and was built like the rest of the palace with white local limestone and marble of high quality, most of which was from marble quarries on the island of Brač, with tuff taken from the nearby river Jadro beds, and with brick made in Salonitan and other factories.

One of the best examples of Romanesque sculpture in Croatia are the Cathedral's wooden doors, made by the medieval Croatian sculptor and painter Andrija Buvina around 1220. Two wings of the Buvina wooden door contains 14 scenes from the life of Jesus Christ, separated by rich ornaments in wood. On the first floor of the sacristy is the treasury which contains relics of Saint Duje brought to the Cathedral after his death.

Why You Should Visit:
After viewing the interior you can climb the bell tower to get a lovely view of the surrounding area and the nearby port.
If you come in time for bell ringing, the experience is complete.

Tip:
You can get either tickets that include the cathedral, Jupiter shrine, and the crypt (in which case you should dress respectfully) or a ticket allowing the bell tower on its own.
The journey to the top of the tower can be claustrophobic and also not for the faint-hearted; it can also get very busy so make sure to go early in the morning.

Image by Alistair young on Flickr under Creative Commons License.
Sight description based on wikipedia
6

Let Me Pass (Pusti me da prodjem) Street is the smallest attraction of Split and one of the narrowest streets in the world. It's just wide enough to allow one grown person to pass at a time, hence the name.
Image by http under Creative Commons License.
7

7) Church of Our Lady of the Bell Tower

Church of Our Lady of the Bell Tower (Gospa od Zvonika) is on the west side of Diocletian's Place and one of the dominant architectural features of the Old Town. The tower is situated above the Iron Gates. The Church's Romanesque bell tower is one of the oldest in Dalmatia and a popular subject for photographers.

Tip:
Rather than looking at the tower alone, you can enjoy the view from the Narodni (People's) Square side with the Iron Gate and the Clock Tower.
Go inside for the mural with Christ behind the altar, which is very interesting for its originality, different from many in the world.
Image by Manuela Duque under Creative Commons License.