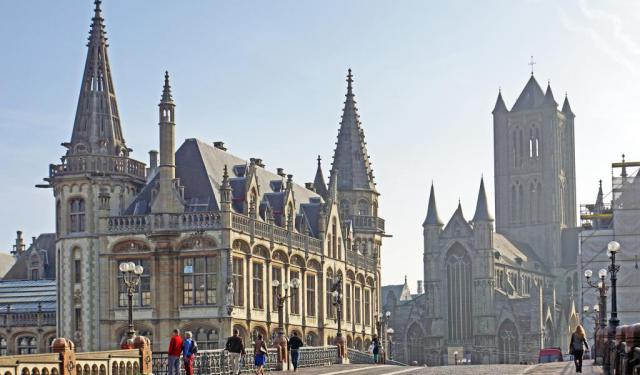 Image by Zeledi on Wikimedia under Creative Commons License.

Ghent is a city full of 15th-century architectural monuments. Medieval buildings are everywhere, and these old buildings contribute to Ghent's fairy tale cityscape, especially along the channel and in the squares. Take this self-guided tour to see some medieval architectural gems in Ghent.
How it works: Download the app "GPSmyCity: Walks in 1K+ Cities" from iTunes App Store or Google Play to your mobile phone or tablet. The app turns your mobile device into a personal tour guide and its built-in GPS navigation functions guide you from one tour stop to next. The app works offline, so no data plan is needed when traveling abroad.

Toreken is the oldest building on Friday Market Square. It was built in the 15th century in the Gothic style. It features a distinctive staircase tower with a clock. The interior is very impressive too, especially the upper floors. Today Toreken houses the Poetry Center. At the top of the building, you will see the mermaid Melusine who watches over the square and holds up her mirror. She shows the direction of the wind.
Image by Dimitri N. on Wikimedia under Creative Commons License.
2

Bond Moyson, also called the Socialist Building, is situated at Friday Market Square, which was once the main square of Ghent. Most buildings on this square were built in the 18th century. Bond Moyson is a great example of the eclectic style of architecture. It was designed by F. Animals. It features Art Nouveau windows and horseshoe windows that attract the attention of tourists. Bond Moyson was built between 1899 and 1902.
Image by e³°°° on Flickr under Creative Commons License.
3

The Fish Market is housed in an old building with a charming Baroque facade, which was built in 1689. The facade is decorated at the top with a statue of Neptune. Other statues at this building represent the two rivers that pass through Ghent, the Scheldt River and the Leie River.
Image by Moody75 on Flickr under Creative Commons License.
4

Graslei and Korenlei are two streets along the river that boast some of the most beautiful architecture in all of Belgium. There are always crowds of tourists along these streets and on the nearby bridges crossing the river. Sightseers stop to stare at the eclectic architecture and elegant facades of the houses in this area, together with the peaceful environment with boats riding along the canal.

Tip:
Make sure to climb the steps of Sint-Michielsbrug (St. Michael's Bridge), where Graslei & Korenlei can be viewed well with the canal. Another very nice viewpoint and photo spot is directly on Korenlei, looking in the direction of Graslei. From there you can see the building guild houses as well as some of the famous landmark buildings like the Belfry in the background. Take your time to look around, and then perhaps do it a second time with binoculars.

Image by rene boulay on Wikimedia under Creative Commons License.
5

The Old Post Office of Ghent is set in the historic center of the city. It is not an especially old building, as it was constructed in the early 20th century, but it blends perfectly with the medieval buildings of the city. You will recognize it by its high clock tower. There are many decorative statues on the building. It is a good example of the beautiful neo-Gothic style of architecture.
Image by cyanocorax on Flickr under Creative Commons License.
6

In the Middle Ages, Ghent was already a major commercial city, renowned primarily for its textile industry. The decline of the latter in the first half of the 15th century prompted the construction of a new, spacious indoor textile market. The venue turned out to be overly commodious for the market and demanded co-tenants to share the space. The Sint-Michiels fencing guild showed interest in the upper floors which they used as sports halls. This 17th-century guild still occupies part of the building. The building’s façade reveals all sorts of Gothic style decorations chiseled in soft sand-lime brick, which is much easier to work in than grey limestone.

Image by William Helsen on Wikimedia under Creative Commons License.
7

7) 'Aula' of the University of Ghent

'Aula' of the University of Ghent represents the neo-Classical style of architecture. It was built by Ghent's outstanding architect Louis Roelandt. 'Aula' is an abbreviation for the Assembly Hall of the University of Ghent. Construction of the building was completed in 1826. The building incorporates many Classical elements, and its design was inspired by ancient temples.
Image by LimoWreck on Wikimedia under Creative Commons License.
8

The Court House is another beautiful historic building. It was constructed in the 19th century by the outstanding Ghent architect Louis Roelandt. He is the architect of many remarkable buildings in Ghent. Many impressive statues depicting judgment scenes decorate the courthouse.
Image by LimoWreck on Wikimedia under Creative Commons License.