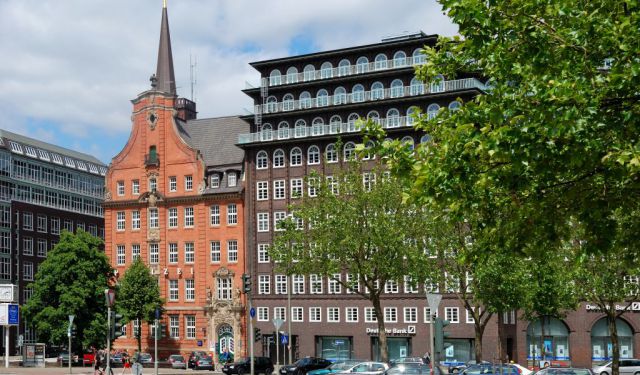 Image by Mbdortmund on Wikimedia under Creative Commons License.

Hamburg is well known for the combination of its history, culture and the aspects of modern life in its architecture. The old buildings, harmonized with the recent, extravagant urban development, make for an unforgettable tour of the city. Take it to enjoy the vibrant and diverse beauty of Hamburg's buildings!
How it works: Download the app "GPSmyCity: Walks in 1K+ Cities" from iTunes App Store or Google Play to your mobile phone or tablet. The app turns your mobile device into a personal tour guide and its built-in GPS navigation functions guide you from one tour stop to next. The app works offline, so no data plan is needed when traveling abroad.

The Chilehaus (Chile House) is a ten-storey office building in Hamburg, Germany, a prime example of brick architecture of the 1920s. This building is located on a site of approximately 6,000m² spanning the Fischertwiete street. It is famed for its top, which is reminiscent of a ship's prow, and the facades, which meet at a very sharp angle at the corner of the Pumpen and Niedernstrasse. Because of the accentuated vertical elements and the recessed upper storeys, as well as the curved facade on the Pumpen street, the building has a touch of lightness, despite its enormous size. The building was designed by the architect Fritz Höger and built between 1922 and 1924. It was commissioned by the shipping magnate Henry B. Sloman, who made his fortune trading saltpeter from Chile, hence the name Chile House. The building was built using 4.8 million dark Oldenburg bricks.
Image by User:SKopp on Wikimedia under Creative Commons License.
Sight description based on wikipedia
2

St. Jacobi Church is one of the five Lutheran churches found in Hamburg city centre. It is located in the Neustadt quarter, close to Mönckebergstraße, one of the city’s main shopping streets. The first recorded mention of the church was in 1255, when it was listed as a small chapel outside of Hamburg’s city walls. It soon became a central part of the growing medieval city, and was replaced by a three naved hall church, similar to the nearby St. Petri church. The fourth nave was added in the 15th century. .

St. Jacobi was destroyed by the extensive bombing of Hamburg during World War II. The church was rebuilt in 1963, in an unusual style featuring medieval design and a modern spire. Many of the church’s original features, including its 60-register baroque organ, survived the bombings and were installed in the new church. The organ, the largest in Northern Europe, can be heard at the church’s main service, held each Sunday morning.

Other medieval relics held within the modern church building include three altars dating from the 14th century, and the historic Ministers’ Room, featuring murals and landscape paintings by Johann Riesenberger. The stained glass windows, created by Charles Crodel, are a modern addition to this aesthetically pleasing place of worship.

Image by Kliojünger on Wikimedia under Creative Commons License.
3

Hulbe Haus is a former art trading house located on Mönckebergstraße, one of Hamburg’s main shopping streets. Protruding into the street ahead of the adjacent, more contemporary buildings, it features a layered steeple topped with a golden cog. This is a symbol found across Hamburg and other Northern Germany port cities, like Hannover and Lübeck. Hulbe Haus is located in the centre of Hamburg’s modern city centre, close to St. Petri church and the Showroom Bischofsburg. It currently houses a department store on its lower floors, in keeping with its fashionable surroundings.

The red brick Hulbe Haus building dates from 1910, and was built by Henry Grell. Its façade is in the Dutch Renaissance style. The building is also notable for its proliferation of ‘Green Men’ carved into sandstone blocks around the façade. ‘Green Men’ is the collective name given to these carvings of mysterious bearded men with contorted faces. Closely resembling an image of God seen in many Christian works of art, they have been sighted in Thailand and China, and some carvings are believed to pre-date Christianity. Hulbe Haus is a must see for hunters of ‘green men’ – there are over a dozen found on this ornate and unusual building.

Image by Staro1 on Wikimedia under Creative Commons License.
4

Hauptkirche St. Petri, known in English as St. Peter’s Church, was built by order of Pope Leo the Tenth in the early 11th century. Whereas most of Hamburg’s other churches were originally built outside the city walls, St. Peter’s has always stood within the ancient walled settlement, known in those days as Hammaburg. It was first documented as a market church in 1195. The present Gothic church building was completed in 1418. The 132m tall tower, almost Scandinavian in appearance, was accompanied by an even higher second tower until 1807, when it was torn down, having been used as a stable by Napoleonic soldiers.

The church was badly damaged by the Great Fire of Hamburg in 1842. It was restored and rebuilt in the original Gothic style, with many of the church’s original features rescued from the fire. These include the lion head door handles found in the west portal, which date from 1342. They are believed to be the oldest surviving artwork in the city of Hamburg. Still a functioning Catholic church, St. Petri has suffered from a dramatic change in its surroundings – once a busy residential area, the church parish now comprises shops and offices. The congregation have embraced this change, allowing stores to advertise on the church building to pay for upkeep of the building.
Image by Anders P on Wikimedia under Creative Commons License.
5

The Hamburger Rathaus is Hamburg’s city hall – its name literally translates as ‘council house of Hamburg’. Designed in the neo-Renaissance style, it was built between 1886 and 1897, following the destruction of the previous city hall in the fire of 1842. It is located in the Altstadt quarter of the city, close to the main rail station and the Binnenalster lakes. The hall was created by Martin Haller, a local architect who also designed the city’s Leiszhalle and Hamburg America Line’s headquarters. Haller would go on to become a member of the Hamburg Parliament, taking a seat in the Rathaus chambers which he designed.

The Rathaus has maintained its intended functions as an administrative centre, and is still the office of Hamburg’s mayor. It also still houses meetings of Hamburg’s parliament and senate. It has been at the centre of many historical moments in the city in the 115 years since its grand opening. Hamburg was surrendered to the British Army by the Nazis at a Rathaus meeting. Haile Selassie and Queen Elizabeth II have both visited the building on state occasions. The hall’s courtyard, complete with fountain, was used to host celebrations by the local football team, Hamburger SV, one of Germany’s most successful clubs.
Image by Heidas on Wikimedia under Creative Commons License.
6

A historic city surrounded by lakes and intersected with hundreds of waterways, Hamburg is often referred to as the ‘Venice of Germany’. This reputation was fostered by the extensive rebuilding of the city centre after the Great Fire of 1842. The architect Alexis de Chateauneuf was tasked with rebuilding many of the damaged areas of Hamburg’s city centre, and took the elegant arcades of the Italian city as his inspiration. One of the finest examples of his work is the Alsterarkaden, an arched arcade on the banks of the Kleine Alsten. It can be found between the railway station and the larger Binnenalster lake to the North.

One of Hamburg’s most famous sights, the Alsterarkaden was completed in 1846, one of the first new developments to open following the fire, which destroyed many of Hamburg’s most famous buildings. The arcade houses boutiques, cafés and restaurants, and is a popular spot for local residents to take lunch by the water. It is equally attractive at night, when the building and the waterside path are lit by wrought iron lamps. Part of the arcade was damaged by fire in the 1980s, but was restored to its original grandeur soon afterwards. The Alsterarkaden backs onto Neue Wall, one of Hamburg’s most prestigious shopping streets.
Image by Hansueli Krapf on Wikimedia under Creative Commons License.
7

The Old Post Office is situated immediately next to the Hamburger Rathaus, in the Neustadt area of the city which houses many of Hamburg’s civic buildings. It was designed by Alexis de Chateauneuf, a German architect tasked with creating and restoring a number of buildings followed the Great Fire of Hamburg in 1842. The ground floor of the former Post Office building bears a series of arches similar to the nearby Alsterarkaden, also designed by de Chateauneuf. Opened in 1847, the building was later converted into a shopping arcade, which it remains to this day.

The Old Post Office building, rather than a reconstruction of a damaged or destroyed landmark, was created by the architect to solve a problem particular to Hamburg. The city covers a large area, divided by rivers and lakes, and faced many challenges to set up basic networks, including transportation, sanitation and a postal service. In 19th century Hamburg, four different regional companies delivered post around the city – Hamburg’s city post office, Thurn & Taxi, the royal Hannover post office and the Swedish postal service. This building, with four separate entrances and extensive mail transfer facilities, began the process of centralizing postal services in this growing city state.
Image by Wmeinhart on Wikimedia under Creative Commons License.
8

A quarter of Hamburg is dedicated to shops, entertainment and recreation. The special design of the whole street with the windows and the brick walls, draws the attention of any visitor. It is considered one of the three main shopping streets of Hamburg.
Image by az1172 on Flickr under Creative Commons License.