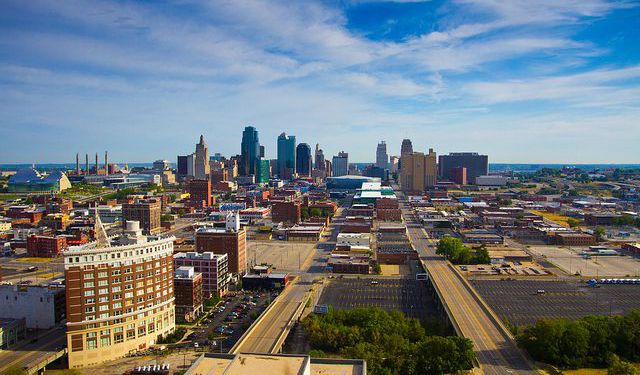 Image by Stuart Seeger on Flickr under Creative Commons License.

Kansas City is the largest city in Missouri and its name is derived from the Kansas Indians who lived along the Missouri River. The city is famous for its contribution to jazz and blues, as well as cuisine – the well-known Kansas City-style BBQ. Stroll around and admire the Art Deco styling, browse the museums, the eclectic shops, check the riverboat casinos, or relax in a jazz club. You can get to know more about all of these in the following tourist guide.
How it works: Download the app "GPSmyCity: Walks in 1K+ Cities" from iTunes App Store or Google Play to your mobile phone or tablet. The app turns your mobile device into a personal tour guide and its built-in GPS navigation functions guide you from one tour stop to next. The app works offline, so no data plan is needed when traveling abroad.

The National WWI Museum and Memorial is a memorial to the fallen soldiers of World War I. It houses the The National World War I Museum, as designated by the United States Congress in 2004. The memorial was completed and dedicated on November 11, 1926. Among other landscaping, its grounds include two large sphinx sculptures, the centerpiece 217-foot tower, and the museums around and under the tower. The design of the building is in a classical "Beaux-Arts monumentalism" style of architecture with a limestone exterior. The foundation was constructed using sawed granite, and the exterior ground level walls are made of Bedford stone. The museum holds two theaters, exhibitions with period artifacts in state-of-the-art interactive displays, a 20,000 sq. ft. research center and library, multi-purpose conference room, and museum store.

Image by Charvex on Wikimedia under Creative Commons License.
Sight description based on wikipedia
2

Union Station Kansas City is one of many union stations in the United States. The architect chosen to design the building was Jarvis Hunt, a proponent of the City Beautiful movement. The design was a main hall for ticketing, and a perpendicular hall extending out over the tracks for passenger waiting. The Beaux-Arts station opened on October 30, 1914 as the second-largest train station in the country. The building encompasses 850,000 square feet, the ceiling in the Grand Hall is 95 feet high, there are three chandeliers weighing 3,500 pounds each, and the Grand Hall clock has a six-foot diameter face. Union Station made headlines on June 17, 1933, as four unarmed FBI agents were gunned down by gang members attempting to free captured fugitive Frank Nash. Union Station is now home to Science City, a family-friendly interactive science center with more than 50 hands-on exhibits.

Image by briandrum on Flickr under Creative Commons License.
Sight description based on wikipedia
3

Hallmark Cards is the famous manufacturer of greeting cards, being America's top postcard company since 1910. Great history lies behind the traditionally-sent greeting card on holidays and memorable dates. Hallmark Cards is based in Kansas City and has its own visitors center, where you can actually observe the creative process of making postcard drafts, see the famous commercials, and talk to operators who will explain how the process works. Dozens of exhibitions are held, many of them are permanent, showing you items ranging from precious antique greeting cards to the latest marvels. The Hallmark Visitors Center is located just next door to the Crown Center.
Image by Raysonho on Wikimedia under Creative Commons License.
4

The Coca-Cola pie-shaped building is highly noticeable in the skyline. Built in 1914 for the purposes of Coca-Cola's industry, it has 12 stories and, for that period, a rather revolutionary design. The building had changed owners in 1928 - Western Auto Supply took over the place, and ever since it has been its second name. It still bears its grand logo on the rooftop. Today, the building is a converted residential loft.
Image by KellyK on Flickr under Creative Commons License.
5

The Crossroads Arts District near downtown Kansas City has undergone significant changes over the past several years. Part of the revitalization is due to the restoration, not demolition, of old, historical buildings.

The historic Globe Building on Main Street, known for its large painted ads on the north-and-south-facing walls, has been transformed into a unique entrepreneurial playground. Massive wooden beams emphasize the history while open workspaces and a “startup store” are on the ground floor. With state-of-the-art technology, all-glass private offices and open, collaborative workspaces, this building is what many co-working spaces aim to achieve. And all this 21st century technology is housed in a building that’s over 122 years old.

Image by Mwkruse on Wikimedia under Creative Commons License.
6

The Mainstreet Theater, also commonly referred to as the Empire Theater, is a historic theater located at 1400 Main Street in downtown. The theater was landmarked and placed on the National Register of Historic Places in February 2007. Designed by Rapp & Rapp, the 90,000-square-foot (8,400 m2) theater opened on October 30, 1921 as the Mainstreet Missouri. The 3,200 seat theater was a popular vaudeville and movie house, and the only theater in Kansas City designed by Chicago firm Rapp and Rapp. The interior of the theater was designed in French Baroque style, and the exterior is a blend of neoclassical and French Second Empire. The lobby is topped by a dome encircled by circular windows. The Mainstreet Theater was the largest theater in Kansas City until the Midland Theatre opened in 1927.
Image by Drive-In Mike on Flickr under Creative Commons License.
Sight description based on wikipedia
7

The City Hall of Kansas City, Missouri, is the official seat of government for the city of Kansas City. It is a 29-story skyscraper located in downtown, and has an observation deck on the top of it. It is the fourth tallest city hall in the world, and the seventh tallest building in Kansas City. The City Hall was built in 1937, under the influence of Tom Pendergast, the "political boss" of Kansas City at the time. It was built to "counter" the effects of the Great Depression on Kansas City, and was part of a series of other government buildings, which include the Jackson County Courthouse. Both buildings were designed by Wight and Wight. Upon completion, it was the tallest city hall in the United States. The City Hall is considered a "Beaux-Arts" style building, but has Art Deco elements on the interior. The interior of the city hall is full of Italian gray, red, white, and green marble which lines the halls and the floors of the building.
Image by KindaGuitarded on Wikimedia under Creative Commons License.
Sight description based on wikipedia