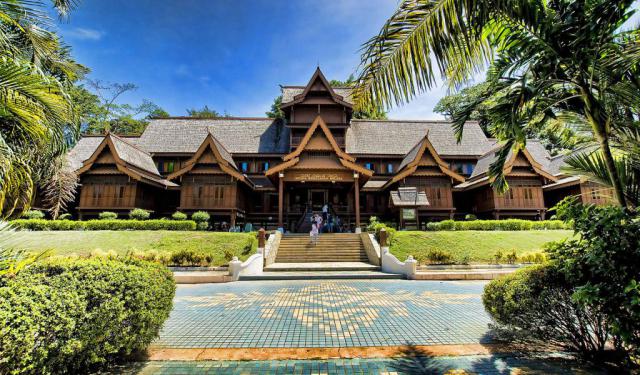 Image by Namimatisa on Wikimedia under Creative Commons License.

Melaka is the historical center of Malaysia and has many old buildings, ancient tombs and fascinating ruins. The history of the city speaks through its landmarks. Take this tour to visit the most popular and noteworthy landmarks in Melaka and to learn more about the city's fascinating history!
How it works: Download the app "GPSmyCity: Walks in 1K+ Cities" from iTunes App Store or Google Play to your mobile phone or tablet. The app turns your mobile device into a personal tour guide and its built-in GPS navigation functions guide you from one tour stop to next. The app works offline, so no data plan is needed when traveling abroad.

Bastion House is located on Jalan Kota next to A Famosa. It is a historical building that was constructed in 1910 by the British company Dunlop. The building was named Bastion House because it is located very close to the bastions of Fortaleza de Malaca, or the Melaka Fort.
Image by Eiffel on Wikimedia under Creative Commons License.
2

The Old City Wall is a popular tourist attraction and prominent landmark. These city walls were built during the Portuguese colonization of the city and were later torn down by the British. Only the ruins of the old wall remain.
Image by christoph kneitschel on Flickr under Creative Commons License.
3

Coronation Park is located in the very heart of the city near many historical landmarks. The garden was created in 1956 after the proclamation of Malaysia's independence. This beautiful and relaxing recreational area is open to the public. A wide avenue runs through the park where you can enjoy various species of beautiful local flowers and plants.
Image by Nation kingdom on Wikimedia under Creative Commons License.
4

If you love local handicrafts, then you must visit Medan Samudera! Located opposite the Maritime Museum, this two-story shop specializes in traditional Melaka handicrafts. Here you can purchase unique gifts for your family and friends back home.
Image by ~MVI~ on Flickr under Creative Commons License.
5

In 1924, the old Portuguese burial vault in the chancel of the church was partially uncovered. Further excavation was done in 1930 by the president of the newly formed Malacca Historical Society, Major C. E. Bone. In 1952, a statue of St. Francis Xavier was erected in front of the ruins of the church in commemoration of the 400th anniversary of his sojourn in Malacca.

Image by Horiuchi on Wikimedia under Creative Commons License.
Sight description based on wikipedia
6

Formerly used by the Dutch, this graveyard is home to numerous graves, where thousands of British soldiers and Dutch citizens rest in peace. The Dutch graveyard was supposedly founded around the 17th century. Come to this peaceful place and reflect on times past.
Image by Rudolph.A.furtado on Wikimedia under Creative Commons License.
7

The Melaka Sultanate Palace is a beautiful imitation of the palace that stood during the period of the Melaka Sultanate. Built at the foot of St. Paul's Hill in 1984, this architectural landmark is now home to the Melaka Cultural Museum, which focuses on the history of the region.
Image by y.square on Flickr under Creative Commons License.