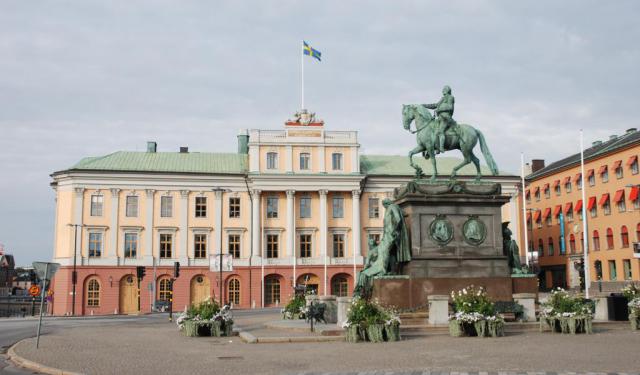 Image by olger.Ellgaard on Wikimedia under Creative Commons License.

Once an independent city, Norrmalm has been a part of Stockholm (one of its central areas, these days) since 1635. Many of Norrmalm's old buildings were torn down during the 1950s-60s to clear space for modern construction. Still, the most notable pieces of local architecture are in place and reveal a wide range of styles - Late Gothic, Renaissance, Baroque. Among the many places of interest found here are the Strindberg Museum (the last dwelling place of the Swedish author August Strindberg, a.k.a. "Blå tornet" (The Blue Tower)), the cemetery in which René Descartes was buried in 1650 before his remains were moved to France; and the Stockholm Concert Hall. To see these and other attractions of the Swedish capital, follow this guide and enjoy!
How it works: Download the app "GPSmyCity: Walks in 1K+ Cities" from iTunes App Store or Google Play to your mobile phone or tablet. The app turns your mobile device into a personal tour guide and its built-in GPS navigation functions guide you from one tour stop to next. The app works offline, so no data plan is needed when traveling abroad.

VOL Fotografagentur, founded in 1998, features five or six exhibitions of well-known photographers per year. The agency deals with professional photographers, illustrators and graphic designers and often encourages the talent of new artists.
Image by Alfred Nobel on Wikimedia under Creative Commons License.
2

The Strindberg Museum is a collection of artifacts and memories which celebrate the life of writer August Strindberg. The museum, located in his home famously known as "Blå tornet” or “The Blue Tower” is sustained by the Strindberg Society of Sweden. Its interior has been restored to echo the décor common to the time when Strindberg lived there, which was between the years 1903 and 1912 and, includes his original furniture.

Visitors to the museum will discover the life of the prolific, sometimes disturbed, playwright and novelist. During his lifetime, he wrote over 60 plays and 30 literary works. His works were eclectic in style and spanned from historical to current themes of the time. In fact, he is considered to be the father of modern Swedish literature. He had an attraction for a wide variety of subjects, including science and the occult. He spent many years traveling. Visitors will be able to see the emergence of a great writer, as he delved into an examination of humankind, which took him down some paths that actually led to a psychological breakdown along with an examination of the unconscious. The museum has been open to the public since 1973.

Tip:
Inquire about tours in your language, as very few labels are in English.
The 20-minute biographical video has a version with English subtitles.
The information sheets about the apartment are available in several more languages.
If you want to also see the library on the 6th floor, inquire in the reception.


Image by Udo Schröter on Wikimedia under Creative Commons License.
Sight description based on wikipedia
3

Built in the late 1700s, the Adolf Fredriks Kyrka, also known as the Church of Adolf Frederick, is located in the central area of Stockholm, Sweden. The church was built on the original grounds of the 17th century Saint Olof Chapel. The church was designed by architect, Carl Fredrick Adel Krantz and named for King Adolf Fredrik. King Adolf Fredrik was the king of Sweden from 1751 until his death in 1771. The architect used the Neo-Classic style of architecture to design the church which was influence by ancient Greece and exhibits broad arms which extend from East to West with a dome where the two cross. The interior of the building employs the architectural elements of linked pilaster columns to support the cornice. Though the interior has had several renovations over the years, the exterior has virtually been unchanged since the 1900s. The church does have a cemetery connected to it, where it once played host to the remains of René Descartes prior to his remains being returned to his homeland of France. A memorial to Descartes was installed by King Gustav III upon his return to France. In addition to Descartes, other famous residents of the cemetery include several prime ministers and famed Swedish authors.
Image by Samuel Montgomery-Blinn on Wikimedia under Creative Commons License.
Sight description based on wikipedia
4

For those who want to hear fabulous orchestral music, the Stockholm Concert Hall was designed in neoclassic style by eminent architect Ivar Tengbom. The bright blue building channels ancient temples of Classic Greece with a courtyard surrounded by elaborate porticos. It opened its doors in 1926 and is the home of the Royal Stockholm Philharmonic Orchestra and the Nobel Prize Ceremony, which is held annually. The Royal Stockholm Philharmonic Orchestra, founded in 1902, has been consistently entertaining crowds of classical music aficionados at this facility since 1914. The orchestra is supported by the Swedish Royal Family, even today. The orchestra plays a significant role in the Nobel Prize ceremonies annually. In addition to the Nobel Prize ceremony, the Stockholm Concert Hall hosts the Polar Music Prize each year. The Polar Music Prize is an international music award which has been presented annually since 1989. The prestigious music award is presented to one contemporary musician and one classical musician each year. Sir Paul McCartney, one of the founding members of the musical group “the Beatles,” was one of the first recipients of the award. The two theaters inside of the concert hall provide a large venue for crowds measuring up to 1,600 in attendance or, the more intimate adjoining theater holds no more than 450 people. Concert tickets typically go on sale two weeks prior to performances.
Image by AndreasPraefcke on Wikimedia under Creative Commons License.
Sight description based on wikipedia
5

Kulturhuset is a cultural center in Stockholm. Until 1983 it housed the Parliament of Sweden. Today it houses a theater, a library, an art gallery, several cafes and more entertainment facilities.
Image by Ellgaard on Wikimedia under Creative Commons License.
6

The Klara Kyrky, known also as the Church of Saint Clare, traces its history all the way back to the 16th century. Founded in 1280, the church originally served as a convent for the Roman Catholic Church. Its inhabitants were members of the order of Saint Clare, hence the name of the church. For over 300 years, the convent served the Roman Catholic Church. Gustav Vasa ordered the convent to be torn down in 1527, upon the commencement of the Protestant Reformation. Only 50 years later, the church was rebuilt into a magnificent piece of architectural history which stands today. The church, at present, is completely surrounded by buildings and, the spires peek above the structures to hint at its presence to the onlooker. The interior contains many paintings emblazoned with golden tones and warm hues, along with stylish stained glass highlights reminiscent of the 18th century and, a pulpit of gold is a site to be seen. As with many churches of the time, the churchyard contains a graveyard whose famous residents include poet, Carl Michael Bellman. The church is open to visitors Monday through Friday 10 a.m. through 6 p.m., Saturday 10 a.m. through 7 p.m. and Sunday 8:30 a.m. through 6 p.m.
Image by Henrik Sendelbach on Wikimedia under Creative Commons License.
Sight description based on wikipedia

Riddarholmen, a small island that is part of Gamla Stan, houses several beautiful historical buildings dating back to the 17th century. Its most important landmark is Riddarholmen Church, the burial place of Swedish monarchs. The Old Riksdag Building is also located here. The western side of the island offers a spectacular view of the bay, Riddarfjärden. Discover Riddarholmen’s historical...  view more

Once an independent city, Norrmalm has been a part of Stockholm (one of its central areas, these days) since 1635. Many of Norrmalm's old buildings were torn down during the 1950s-60s to clear space for modern construction. Still, the most notable pieces of local architecture are in place and reveal a wide range of styles - Late Gothic, Renaissance, Baroque. The district is a home to The...  view more