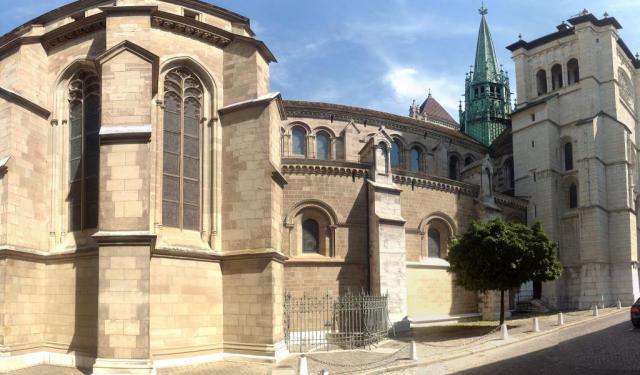 Image by Mike B in Colorado on Flickr under Creative Commons License.

Geneva has always been very much appreciated by tourists, as it provides a variety of attractions. Everyone, who comes to Geneva is fascinated by its medieval look and the marvelous buildings, which are a mix of French and German influences. Take this walking tour if you are interested in learning more about some of the top architectural wonders of Geneva.
How it works: Download the app "GPSmyCity: Walks in 1K+ Cities" from iTunes App Store or Google Play to your mobile phone or tablet. The app turns your mobile device into a personal tour guide and its built-in GPS navigation functions guide you from one tour stop to next. The app works offline, so no data plan is needed when traveling abroad.

The Hotel de Ville serves as Geneva’s Town Hall, and the meeting place for representatives of the Republic and Canton of Geneva. This hotel is also of great historic importance, as here, many historical treaties have been signed. The 16th century architectural design boasts three stories of neoclassical design, with a large courtyard and a paved ramp, enclosed within a square tower.
Image by Geri340 on Wikimedia under Creative Commons License.
2

The Ancien Arsenal used to be a militarily strategic building in Geneva, due to its use as storage for arms and gun powder. The building’s architecture makes it look like a fortified mansion, with five cannons that are always ready to defend the city. Today, the Old Arsenal building houses the State Archives.
Image by WWHenderson20 on Wikimedia under Creative Commons License.
3

The Maison Tavel is considered to be one of the oldest houses in Geneva, and at the same time, a true representation of the medieval architecture from the 11th century. The name Tavel House comes from a rich family in Geneva that rebuilt the building after it had been severely damaged by fire. The House is perfectly complimentary to the urban look of the modern Geneva. Today, the Maison Tavel is a remarkable museum that showcases the history of Geneva.

Image by Moumou82 on Wikimedia under Creative Commons License.
Sight description based on wikipedia
4

Tips:
Inside the cathedral one can find an exquisite little chapel with astonishing carved figures and a beautiful organ - Chapel of the Maccabees.


Image by Torbjorn Toby Jorgensen on Wikimedia under Creative Commons License.
Sight description based on wikipedia
5

The Murs des Réformateurs was erected in 1909 in order to pay tribute to the reformist movement and its major figures: Jean Calvin, Théodore de Bèze and Guillaume Farel. The reformation wall is regarded as a religious site since it depicts important periods of time in the evolution of the movement, on its bas-reliefs, as well as different notable personalities that contributed to this movement.
Image by Ruth Nguyen on Wikimedia under Creative Commons License.
Sight description based on wikipedia
6

The Place Neuve is the area where you'll find the picturesque building of Grand-Théâter, a replica of the Paris Garnier Opera House. This theater is regarded as one of the architectural masterpieces of 19th century Geneva, and is nicely designed in a Neo-Baroque style. As with many other opera houses, the Grand Théâtre de Genève is both a venue and an institution. The venue is a majestic building, towering over Place Neuve, officially opened in 1876, partly destroyed by fire in 1951 and reopened in 1962, after extensive refurbishments, which houses the largest stage in Switzerland. As an institution, it is the largest production and host theatre in French-speaking Switzerland, featuring opera and dance performances, recitals, concerts and, occasionally, theater. During the 17th and early 18th centuries, Geneva was heavily influenced by Calvinist orthodoxy and it was not until the middle 1760s that the city agreed to the building of the Théâtre de Rosimond, Geneva's first opera house. Under the influence of Voltaire opera began to flourish at La Grange aux Etrangers and its successor theatre, the Théâtre de Neuve, both of which were located outside the walls of the city.
Image by AndreasPraefcke on Wikimedia under Creative Commons License.
Sight description based on wikipedia
7

Tour de l'Ile is the remains of a fortified castle from the 14th century, which played an important role in the defense of the city. The tower is located between the banks of the river Rhône, thus the military stationed there were able to watch for enemies that were coming from the North. The Tour de L’Ile counts itself as one of the best amongst the cultural and architectural heritage sites of Geneva.
Image by Falcon® Photography on Flickr under Creative Commons License.
8

You'll discover this unusual housing complex with curved walls and surprising colours in the lively Grottes district behind the railway station. Three architects planned and built these residences between1982 and 1984, inspired by the Spanish artist Gaudi. There are reliefed balconies, wrought iron railings and… not a single straight line. The comparison between these buildings and the many-faceted, multicoloured mushroom houses of the blue comic strip characters could not be denied. No wonder the housing complex is called ’The Smurfs’!
***PH***
https://www.geneve.com/en/attractions/the-smurfs-buildings/
Image by Anders Sandberg on Flickr under Creative Commons License.