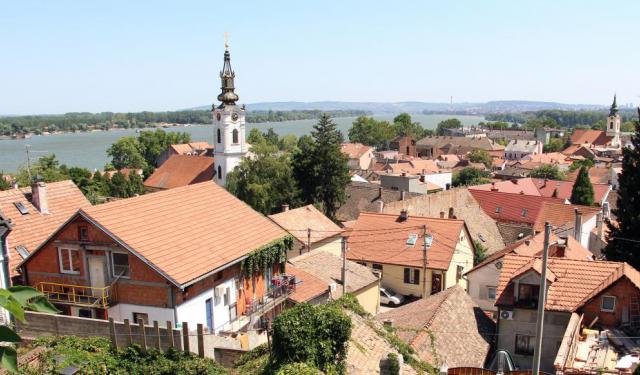 Image by Julian Nyča on Wikimedia under Creative Commons License.

Zemun neighborhood is one of the oldest parts of Belgrade, spread around the Gardoš Hill. Throughout centuries, as the Balkans were first part of the Roman, then Byzantine and, finally, the Austro-Hungarian empires, the area has transformed into a beautiful town, with narrow streets, cute buildings and breathtaking views, opening from the hill onto the Old Belgrade Town and the Danube riverside.
How it works: Download the app "GPSmyCity: Walks in 1K+ Cities" from iTunes App Store or Google Play to your mobile phone or tablet. The app turns your mobile device into a personal tour guide and its built-in GPS navigation functions guide you from one tour stop to next. The app works offline, so no data plan is needed when traveling abroad.

The Zemun Gymnasium is one of the most prominent educational institutions of Belgrade, renowned for its high academic record. It is located in Town Park, between the University of Belgrade Faculty of Agriculture and a primary school. The Gymnasium was founded on September 23, 1858, and initially had only one class with just 21 students. Under the Austrian and then Austro-Hungarian Empires, its language of instruction was German. The Renaissance-style building was completed in 1879, designed by Nikola Kolar. By 1912, it had proved insufficient to accommodate all the students and in 1916 was expanded with some additions in Post-Secessionist style. The building is now under the state's protection as a cultural monument.
Image by Lukaares on Wikimedia under Creative Commons License.
Sight description based on wikipedia
2

The Zemun Post Office was built in 1896 on the site of an 18th century building. The corner edifice is a work of architect Franja Jenč, done in Neo-Renaissance style with a Baroque influence and decorative roof elements. To many, the Post Office is seen as a manifestation of history and character of the old town of Zemun. The terracotta color wall makes it a particularly noticeable landmark.
Image by Matija on Wikimedia under Creative Commons License.
3

The Homeland Museum of Zemun, founded in 1955, documents the area's history from the earliest settlement to the present day. The museum's building was erected in 1848 and originally belonged to one of the wealthiest and most influential local families, the Spirtas. The building features Neo-Gothic design with flamboyant windows, which stands out among the other buildings in the vicinity.

Image by Dejandanailov on Wikimedia under Creative Commons License.
4

4) House with the Sundial

The House with the Sundial is a landmark building in central Zemun. This 19th century corner mansion has a sun clock on its side, facing Dubrovacka Street. The sun clock still works, showing the correct time when it's sunny. The building was designed in a Classical style, with some Baroque features. The place is also renowned for being the home of writer Jovan Subotić, who spent there his last years.
Image by bill kralovec on Flickr under Creative Commons License.
5

The Madlenianum Opera and Theatre is the first privately-owned opera and theatre company in Serbia and southeastern Europe. It was founded on 26 January 1999, in a building that had previously housed the second stage of the National Theatre of Serbia. After seven years of work and five stages of reconstruction, on 19 April 2005, a completely refurbished, reconstructed and conceptually enriched edifice opened its doors to the public. Today, the theatre provides stage for operas, ballets, concert programs, dramas and musical performances.
Image by Tadija on Wikimedia under Creative Commons License.
Sight description based on wikipedia
6

Gospodska Street is a pedestrian shopping lane in Zemun and its main attraction as such. This tidy street is a hub of little shops, boutiques, and sidewalk cafes and restaurants. Many historic buildings and architectural monuments are found here too. The street is landmarked by the Zavetni Cross, a victory memorial erected by Lazar Urosevic in 1863. This is also a popular venue for public gatherings and fairs.
Image by Eric Prendergast on Flickr under Creative Commons License.
7

Zemun Opstina, or the City Hall, was built in 1886, designed originally as an administrative building. This imposing and somewhat heavy three-story Neo-Classic edifice sustained heavy damage during WWII, but was afterwards restored with a new wing and some features added. The City Hall overlooks the ever-crowded Zemun street market.
Image by Nicolo on Wikimedia under Creative Commons License.
8

The outdoor market in Zemun is the best place to shop for fresh fruits, vegetables, fish, as well as antiques and some odd objects. Up until 1935, it was a cereal market. Nowadays, there are several rows of the best local produce sold at very affordable prices. The market also works as a flea market, where tourists and collectors may find some truly rare items, mostly from the 20th century.
Image by whitneyinchicago on Flickr under Creative Commons License.
9

Zemunski Kej is the main Zemun's landing area for numerous boats. Also, as the bank (and thus the quay too) follows the line of the nearby Great War Island, it is the beginning point of the pontoon bridge which seasonally connects the island with the mainland.

Image by Milan Milan on Flickr under Creative Commons License.
Sight description based on wikipedia
10

The Stara Kapetanija Art Gallery was founded in 1985. Located at the picturesque Zemun Quay, it is one of the most known and trendiest art galleries in Belgarde. The gallery features contemporary art pieces, mostly paintings, created by Serbian artists, some of whom are award winners. It is also renowned for hosting the International Salon of Caricature in Zemun.
Image by Maryse Casol on Flickr under Creative Commons License.
11

Kula Sibinjanin Janka - the Millennium Tower - otherwise known as the Tower on the Hill, or simply the Gardoš Tower, is an attraction in its own right. It was built and officially opened on August 20, 1896, to celebrate one thousand years of Hungarian settlement in the Pannonian plain. The tower came as part of a massive construction effort which included buildings in Budapest, as well as four millennium towers in each of the world's four directions. Being the southernmost city in then Hungary within Austria-Hungary, the tower was built on the ruins of a medieval fortress on Gardoš Hill (only angular towers and parts of the defending wall had survived). The tower was built as a combination of various styles, mostly influenced by Roman elements. As a natural lookout, it was used by Zemun's firefighters for many decades. Today, the tower is better known for its indirect association with Janos Hunyadi, who had died in the old fortress four and a half centuries before the tower was built.
Image by CrniBombarder!!! on Wikimedia under Creative Commons License.
Sight description based on wikipedia