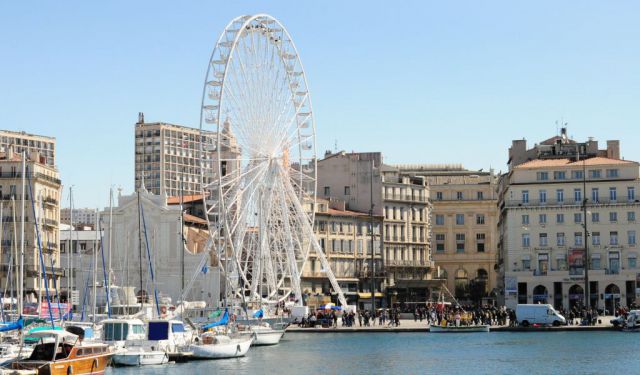 Image by Milena on Flickr under Creative Commons License.

Located on the Mediterranean coast of France, Marseille is the largest commercial port and the second most populous city in France. Being also the country's oldest, the city is known for its ancient heritage, distinctive culture, ethnic diversity and strong identity, all of which secures for Marseille the status of a major tourist destination. Follow this orientation walk to explore some of the top attractions of Marseille.
How it works: Download the app "GPSmyCity: Walks in 1K+ Cities" from iTunes App Store or Google Play to your mobile phone or tablet. The app turns your mobile device into a personal tour guide and its built-in GPS navigation functions guide you from one tour stop to next. The app works offline, so no data plan is needed when traveling abroad.

Close to the Vieux Port and Le Panier, La Canèbiere is another of Marseille’s most important areas. It is the city’s biggest avenue, and it represents the wealth that Marseille once possessed and gladly displayed. The huge, ornate buildings and elegant hotels that once stood on each side of the street have now mostly been converted into restaurants, shops or offices, but they still conserve some of their previous grandeur. The avenue stretches almost one kilometer from the Vieux Port, and leads to the fun Capucin neighborhood, among others.
Image by Patrick Nouhailler's… on Wikimedia under Creative Commons License.
2

The Old Port of Marseille, or Vieux-Port, is located at the end of the Canebière. In 600 BC, Greek settlers from Phocaea landed in the Lacydon, a rocky Mediterranean cove, now the site of the Old Port of Marseille. They set up a trading post in the hills on the northern shore. Until the 19th century, the Old Port remained the center of maritime activity in Marseille. The great St. Victor's Abbey was gradually built between the third and ninth centuries on the hills to the south of the Old Port, on the site of a Hellenic burial ground.

According to John Murray, in 1854 the Old Port had a capacity of between 1,000 and 1,200 ships. Roughly 18,000 merchant ships passed through the port each year, carrying about 20 million barrels worth of freight; this represented a quarter of the trade in Liverpool at the time. Today the Old Port is used only as a marina and as a terminal for local boat trips.

In World War II the Old Port was left in complete ruins. According to eye-witness accounts, in January 1943, the Nazis, aided by the French police, dynamited much of the historic old town and demolished the gigantic aerial ferry or "transbordeur", an engineering tour de force that had become a major landmark of Marseille, comparable to the Eiffel tower in Paris. This became known as the "Battle of Marseille". In 1948 Fernand Pouillon was put in charge of the reconstruction of the devastated old quarter.

Image by Ingo Mehling on Wikimedia under Creative Commons License.
Sight description based on wikipedia
3

Image by Tanya Dedyukhina on Wikimedia under Creative Commons License.
Sight description based on wikipedia
4

The centre of Marseille has several pedestrianised zones. One of them is Cours Honoré-d'Estienne-d'Orves, a large square off the Vieux-Port. e Ville.
Image by Patrick Nouhailler's… on Wikimedia under Creative Commons License.
Sight description based on wikipedia
5

The Grand-Théâtre was designed by the three architects Ebrard, Castel, and Raymond. Many well-known contemporary singers made their French debuts in this opera house. Among them are Alfredo Kraus, Plácido Domingo, and Renata Scotto. Past music directors of the company have included János Fürst. After World War II the Marseille opera house staged Sigurd by Ernest Reyer in 1963 and 1995.
Image by Jeanne Menjoulet on Flickr under Creative Commons License.
Sight description based on wikipedia
6

In keeping with the neighboring rue de Rome, rue Paradis, one of the most fashionable and top-end shopping areas of Marseille, established as far back as 1044, is soon to get a major and largely deserved “face-lift” of its own, between the squares of Estrangin and General de Gaulle, en route to La Canebière. The works include widening sidewalks, creating functional areas for deliveries, arranging parking and planting of trees, all of which are due to be completed by early 2018. Previously, this area underwent its first urban renovation, seeing the enlargement of the city wall under Louis XIV, back in 1666.
Image by So_P on Flickr under Creative Commons License.
7

This bustling pedestrian street is the heart of Marseille's shopping district. A large variety of boutiques, galleries, superstores guarantee that you will find anything you are looking for. Shopping spots include the Galleries Lafayette, H&M, Sephora, Mango, Zara, the Virgin Megastore, and many more.
Image by yisris on Wikimedia under Creative Commons License.
8

If you're into fashion at reasonable prices, Rue de Rome is your place. Young girls and youngsters regularly storm the area's numerous shoe-, clothes-, and accessories stores for a quality gear at remarkably low prices. One such spot is Monoprix, commonly referred to as "Baze" after its founder, a human-size supermarket with a broad range of inexpensive goods and generous opening hours. Rue de Rome is also home to some traditional shops like Le Père Blaize, a herb outlet in business since 1815. The launch of a new tramway line across Rue de Rome in 2015 saw the street totally renovated; broadened sidewalks, more trees and less traffic have largely contributed to the restoration of its yesteryear luster.
Image by Cargiaca on Wikimedia under Creative Commons License.
9

This beautiful garden close to the district of La Plaine is a fashionable area in Marseille offering shops, bars, restaurants, theaters and concert halls. Today it is one of the most beautiful and well-kept public gardens in the city as well as being the art and music capital of the region. Its population is very cosmopolitan as thousands of people from different backgrounds live there. The huge fountain in the square and the playground draws in local families as well as tourists. There isn't anything specific to do here, but the area is so vibrant and colorful that it's an attraction in itself. Bring your camera!

Tip:
Try to visit after 5pm when the whole vibe changes and the area starts buzzing with people of all ages and styles.
Mornings are also fun – those who love outdoor food markets may want to check out the organic market (8am-1pm).
Image by Mikey Bean on Flickr under Creative Commons License.
Sight description based on wikipedia