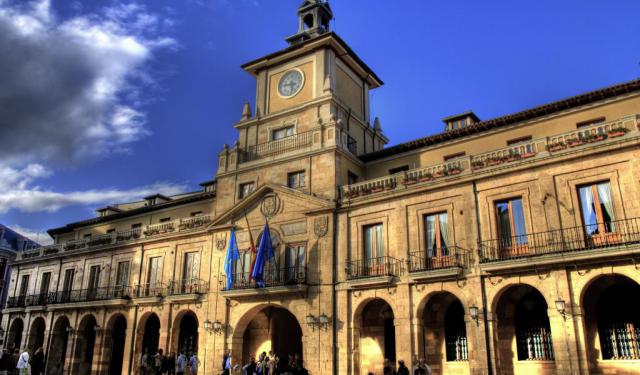 Oviedo is famous for featuring a lot of curious statues, sculptures and artistic compositions. Each of them has a story, certainly worth knowing. This tour will show you the most famous and beautiful of Oviedo hidden jewels.
How it works: Download the app "GPSmyCity: Walks in 1K+ Cities" from iTunes App Store or Google Play to your mobile phone or tablet. The app turns your mobile device into a personal tour guide and its built-in GPS navigation functions guide you from one tour stop to next. The app works offline, so no data plan is needed when traveling abroad.

Vendedoras del Fontán is located in the Plaza de Daoíz y Velarde, a beautiful and quiet place in the center of the city. The plaza is fringed by tree lines, offering shelter from the sun to its visitors. The Daoíz y Velarde square is home to a library, palace, fountain and a statue. The statue was inaugurated in 1996, it depicts two women who came to the marketplace from the village to sell their goods. This composition aims to remind us about the contributions of women in a post-war world.
Image by Gonmi on Flickr under Creative Commons License.
2

Plaza del Fontán is a small and beautiful arched square, located in Oviedo's old town. It is filled with cafes and creates a very cozy and relaxing atmosphere. The square was formed in the 12th century by the peasants who came to the city in order to sell their products (milk, vegetables, cheese, chicken, etc.). Very soon, the plaza became the commercial center of the city suburbs. It houses El Fontán Market - the place where a visitor can have a deep insight into Oviedo's traditions and culture.

Since that time, the appearance of the square and its purpose have changed, but it remains a lively place, bustling with people.

La pescadera is a sculpture by Sebastian Miranda. It was installed at the entrance to Plaza del Pescado in 2005. The sculpture depicts the main heroine of the play “Saturnina Requejo, la Cachucha”. The composition is famous for its sublime beauty and realism. People say that from time to time, the Pescadera actually seems to wake up from her thoughts and start looking at passersby in surprise.
Image by Raimundo P. Porres / RAYPORRES on Flickr under Creative Commons License.
5

Another wonderful statue by José Antonio García Prieto, “Vendedor de pescado” is installed not far from La pescadera. The life-size statue is made of bronze and depicts a typical fish seller, smoking a cigar and waiting for his next customer. The basket near the merchant is full of fish. The image of the Vendedor represents the Oviedo fisherman's guild, showing a moment from their day to day life.
Image by Raimundo P. Porres / RAYPORRES on Flickr under Creative Commons License.
6

La Lechera is located on the Plaza Trascorrales. This square used to house the former fish market hall, which now serves as a venue for various exhibitions and other events. An artistic composition by Manuel Garcia Linares serves as the main feature of the square. It depicts an old village woman selling milk. The woman is accompanied by a small donkey. The composition has no pedestal in order to be closer to the people and to create an impression that it is part of their everyday life.
Image by Gonmi on Flickr under Creative Commons License.
7

Plaza del paraguas is located in the Oviedo Old Town. Initially this square was created for the visitors of the old Romanesque church of San Isidoro. However the church was demolished in 1922, but the square remained to welcome Oviedo's citizens. The “Plaza del paraguas” is translated as “Umbrella square” because of the big umbrella in the very center of it. This canopy gives shade to those who want to hide from the hot Spanish sun.
Image by Gonmi on Flickr under Creative Commons License.
8

Corrada del Obispo is a square in the historic district of Oviedo. It is surrounded by the Episcopal Palace, Cloister of the Cathedral of Oviedo and Casa del Deán Payarinos. These buildings make part of the city architectural heritage and turn the Corrada del Obispo square into valuable cultural object. The square received its current appearance in 1900, when the Deán Payarinos house was founded.
Image by AurelianusRex on Flickr under Creative Commons License.
9

Plaza de Feijóo is located in the heart of the historic city of Oviedo. It is named after the renown writer, teacher and philosopher, Benito Jerónimo Feijoo. The statue of Father Fray Benito Feijoo is installed in the center of the square. Benito Feijoo is famous for writing several immortal works like “Teatro Crítico” (Critic Theater) and “Cartas Eruditas” (Educational Letters). His works were translated in Italian, Portuguese, English, and German. The writer was one of the first to support women rights in his famous “Defense of Women” (1726), claiming that women have the same intelligence level as men and should be given equal rights and opportunities. His works still possess high cultural and scientific value.
Image by Raimundo P. Porres / RAYPORRES on Flickr under Creative Commons License.
10

La Gitana is a bronze statue by Oviedo sculptor, Sebastian Miranda. It was installed in 2005 and depicts an older gypsy woman in rustic clothing, holding a basket on her hip. This is not the only gypsy sculpture by Sebastian Miranda, he liked using models from the gypsy world to create his work. The La Gitana statue is located at the entrance to the Gascona street.
Image by Gonmi on Flickr under Creative Commons License.
11

Guisandera by María Luisa Sánchez-Ocaña is located on the Boulevar de la Sidra. The sculpture depicts a woman cooking and a little girl who can't take her eyes of the process. It represents a tribute to female labor, as well as to the role women have played throughout history.

The composition was installed in 2000.

Image by austinevan on Flickr under Creative Commons License.