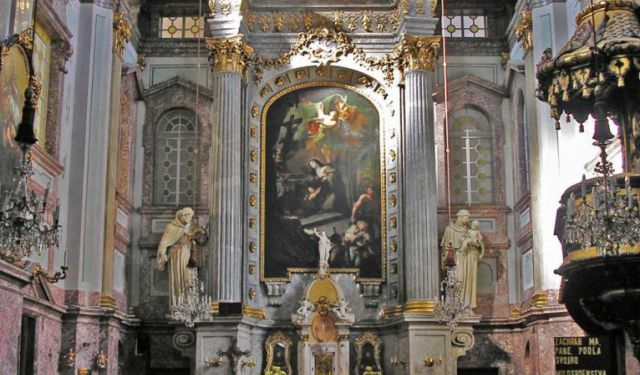 Image by Opticky klam on Wikimedia under Creative Commons License.

Self-Guided Tour of Religious Buildings in Bratislava (Self Guided), Bratislava

Religious Buildings of Bratislava are not just architectural monuments and historic treasures, but also beautiful places that convey a religious atmosphere and spiritual mood. Seize the opportunity to become a part of harmony by visiting Bratislava religious buildings.
How it works: Download the app "GPSmyCity: Walks in 1K+ Cities" from iTunes App Store or Google Play to your mobile phone or tablet. The app turns your mobile device into a personal tour guide and its built-in GPS navigation functions guide you from one tour stop to next. The app works offline, so no data plan is needed when traveling abroad.

St. Martin’s Cathedral is the oldest and largest cathedral in the area. The history of it is long and closely associated with the Austro-Hungarian royals who used it as a coronation church. Emperors and Empresses such as Leopold I, Maximilian II, Rudolf II, Matthias, Elisabeth Christine and Maria Theresa where all crowned here. The massive spire of the cathedral dominates the city’s skyline reinforced by the bold Gothic features. The incredible stained glass windows also deserve mention. The Cathedral's bell tower displays replica of a Hungarian Crown, while the alter features a massive statue of St. Martin on horseback dressed up in Hungarian regalia, sculpted by Georg Rafael Donner in 1744. Just as many other buildings of that period, the cathedral has survived several fires. Each time it burned down, the ensued reconstruction brought in a mix of new architectural styles which are now visible all over the place. Inside the chapel there are catacombs holding the remains of many prominent Austo-Hungarian historic figures laid down to rest.
Image by J_Makk on Wikimedia under Creative Commons License.
2

Built in 1661, the Church of St. Nicholas was erected by Countess Frances Khuen, the widow of Count Paul Pálffy. Located next to world renowned Bratislava Castle, the structure is built in the early Baroque architectural style with a hint of Gothic bravura. The Baroque style was supported by the Jesuit order of the Roman Catholic Church during the 17th century. Common to this type of architecture, the church has expansive naves and vivid lighting. Visitors to the building are greeted by a stone statue of St. Nicholas, the patron saint of fishermen and sailors of the Roman Catholic Church, who is located in the stone niche above the entrance of the building. Just like the municipality where it is located, the church has been influenced by the people of diverse nations and religions like the Austrians, Germans, Hungarians, Slovaks and the Czechs. Up until the 1900s, St. Nicholas’ Church was administered by the Roman Catholic Church. Presently, the facility serves the Orthodox Church. The extravagant altar is recognized throughout the community of academic experts of Baroque architecture as one of the best examples of this time period. The incredible angels at the top of the altar were created by the renowned artist Paul of Levoca.
Image by XpucmoSK on Wikimedia under Creative Commons License.
3

3) Church and Nunnery of the Order of the Sisters of St. Clare

Currently the site of a Bratislava concert hall, the Church and Nunnery of the Order of the Sisters of St. Clare dates back to the 14th century. The church was originally held by the Order of the Sisters of St. Clare, also known as the Sisters of Poor Clare, which was an order of nuns in the Roman Catholic Church founded by Clare of Assisi in 1212 C.E. The structure is a amalgamation of Baroque and Gothic styles with a fantastic five-sided tower as its most dominant characteristic. The tower can be seen from all over the city of Bratislava. The tower has a folktale attached to it which involves a knight who is said to have fallen intensely in love with one of the nuns in the abbey but, he was never able to act on his love. The legend says that he erected the tower as compensation to the Mother Superior for permitting him to wed the nun but, the Mother Superior did not satisfy the promise, and consequently broke the young knight’s heart. Over the years, the convent has been used for several purposed including as a school which educated several famous Slovakians like Béla Bartók and Jozef Murgaš.
Image by Opticky klam on Wikimedia under Creative Commons License.
4

The Capuchin Church that was built in 1717 belongs to the Capuchin order in Bratislava and is consecrated to Saint Stephen of Hungary. You can find the statue of St. Stephen above the main portal. The Church has a very simple but notable design. The square of the Capuchin Church is decorated with a column to the Virgin Mary.
Image by Yusuke Kawasaki on Wikimedia under Creative Commons License.
5

The Trinitarian Church of Bratislava is also known as the Church of Saint John of Matha and Saint Felix of Valois. Located in the Old Town of Bratislava, the church is chockfull of fantastic Baroque features. The structure was erected on the original location of the first St. Michael’s Church in 1717, after almost 200 years following the destruction of the St. Michael’s settlement during the Ottoman wars. Many of the components found in the design of the building were influenced by features of the St. Peter’s Church in Vienna, the sister city of Bratislava. With its awe-inspiring vaulting and unbelievable frescos, this is categorically a must-see for those who appreciate architecture. The altar was manufactured by A.G. Bussi. The main feature of the construction is the altarpiece showing St. John of Matha and St. Felix of Valois ransoming prisoners, while the statues of St. Agnes and St. Catherine flank the altar. Over the years, the great hall of the church has played host to various prominent composers who held concerts for the public, including Johannes Brahms and Franz Liszt. The building has served as a secular and sacred facility with everything from church services to political events being facilitated within its walls.
Image by Frettie on Wikimedia under Creative Commons License.
6

Sanctified in 1297, the Franciscan Church is one of the oldest sacred buildings in Bratislava, Slovakia. Constructed by King Ladislaus IV of Hungary, the building has suffered several times in its history from natural disasters and fires, each time being reconstructed. The building was originally erected in the Gothic style. However, with each reconstruction other architectural styles were infused into the structure. Over the years, the facility has been used for knighting ceremonies, funerals, meetings, elections and parliamentary sessions. The brick pillar altar of the church displays the statues of St. Stephan and St. Emeric along with an immense glass painting illustrating the Annunciation. Several altars border the main altar and are dedicated to numerous important ecclesiastical moments and people including, St. Anthony of Padua and St. Francis of Assisi, along with Our Lady of Sorrows and the Nativity. The pulpit is a striking representation of the Rococo style with incredible relief sculptures portraying the life of St. Francis. Distinct to the church is the shrine of St. Reparat, who was a deacon and martyr and patron of those who want to make a positive change in their life. The torso of St. Reparat is contained in the reliquary.
Image by Opticky klam on Wikimedia under Creative Commons License.
7

7) The Church of Merciful Brothers

The Church of Merciful Brothers is part of a complex which includes the church, the monastery, and the hospital of Merciful Brothers. The complex was built in 1728 and played a significant role during the pestilence of the early 1700s, as well as a bourgeois revolution in 1848–1849.
Image by Guillaume Speurt on Wikimedia under Creative Commons License.
8

The Hungarian Secessionist Catholic Church, known as the Church of St. Elisabeth or the Blue Church, is located in Old Town Bratislava, Slovakia. The construction was consecrated to Elisabeth of Hungary, who was a princess and, later, became a Roman Catholic saint. She was widowed young and surrendered her wealth for a life devoted to the poor and indigent. After her death at the age of 24, many miracles of healing were accredited to her. She was canonized by Pope Gregory IX in 1235. The structure was designed by Ödön Lechner, a recognized Hungarian architect. He was known to embellish his constructions with Zsolnay tile patterns. Zsolnay tiles were manufactured by a Hungarian company known for its intricate porcelain, tiles, stoneware and pottery. The tiles on the church’s roof were generated using the pyrogranite process, which involves firing ceramic under exceptionally high temperatures, producing resilient materials which are resistant to acid and frost. The structure has attained its name because of the blue color of the mosaics, which decorate its roof and walls. Built in 1908, the building features a cylindrical tower and bell dome common to the Hungarian Art Nouveau and the Romanesque movement in art and architecture. The single nave church contains vaulted ceilings along with hints of barrel vaults. Romanesque double pillars encompass the entrances and the windows.
Image by RoyFocker on Wikimedia under Creative Commons License.