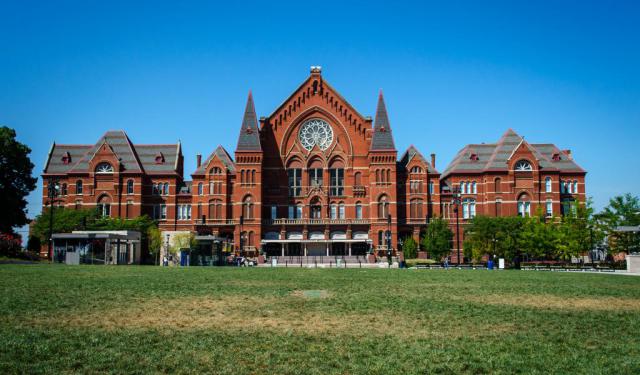 Image by Rick Dikeman on Wikimedia under Creative Commons License.

Cincinnati has a long history as a prosperous commercial center. Today, the city is home to a variety of historic buildings, including German homes, French cathedrals and remarkable 19th-century mansions. Visit such notable landmarks as Fountain Square, St. Paul Church and Elsinore Arch. Take this tour to better appreciate Cincinnati's beauty.
How it works: Download the app "GPSmyCity: Walks in 1K+ Cities" from iTunes App Store or Google Play to your mobile phone or tablet. The app turns your mobile device into a personal tour guide and its built-in GPS navigation functions guide you from one tour stop to next. The app works offline, so no data plan is needed when traveling abroad.

The Newport Southbank Bridge, popularly known as the "Purple People Bridge", stretches 2,670 feet over the Ohio River, connecting Newport, Kentucky to downtown Cincinnati. The original bridge first opened on April 1, 1872, under the name Newport and Cincinnati Bridge; it was Cincinnati's first railroad bridge spanning the Ohio River. The current bridge was constructed in 1896 and accommodated streetcar, pedestrian and automobile traffic. In 1904, the bridge was renamed the L&N (Louisville and Nashville) Railroad Bridge. On April 17, 2001, the L&N Railroad Bridge was listed on the National Register of Historic Places.

Image by Derek Jensen on Wikimedia under Creative Commons License.
Sight description based on wikipedia
2

The National Steamboat Monument is a 30-foot replica of the paddle wheel of the steamboat American Queen. The monument consists of one bright red wheel and two dozen stainless steel columns. It plays music and discharges steam when visitors pass by. The monument, which rises above the Ohio River, is a fascinating reminder of Cincinnati’s past.
Image by Curtis Billue on Flickr under Creative Commons License.
3

The John A. Roebling Suspension Bridge spans the Ohio River between Cincinnati, Ohio and Covington. When the first pedestrians crossed on December 1, 1866, it was the longest suspension bridge in the world at 1,057 feet (322 m) main span. Today, many pedestrians use the bridge to get between the arenas in Cincinnati (Paul Brown Stadium, Great American Ball Park, and U.S. Bank Arena) and the hotels, bars, restaurants, and parking lots in Northern Kentucky. The bar and restaurant district at the foot of the bridge on the Kentucky side is known as Roebling Point.

Ramps were constructed leading directly from the bridge to the Dixie Terminal building used for streetcars. These provided Covington-Cincinnati streetcars "with a grade separated route to the center of downtown, and the terminal building was originally intended to connect, via underground pedestrian passages, with the never-built Fountain Square Station of the infamous Cincinnati Subway." When streetcar service ceased in the 1950s the terminal was converted to use as a diesel bus terminal. The ramps were removed in 1998 when it ceased being used as a bus terminal.

Image by Derek Jensen on Wikimedia under Creative Commons License.
Sight description based on wikipedia
4

Fountain Square has been the symbolic center of Cincinnati since 1871. The square, which replaced a butcher's market, was a gift from Henry Probasco in memory of Tyler Davidson. Probasco traveled to Munich and commissioned a bronze allegorical fountain from Ferdinand von Miller named The Genius of Water that symbolizes the uses of water, both natural and man-made. Originally, the square was a large island in the middle of 5th Street with buildings to the north and south, much like nearby Piatt Park. A 1971 renovation of the square included slightly moving and re-orienting the fountain to the west, and enlarging the plaza by removing the original westbound portion of 5th Street and demolishing buildings to the north. It is used for lunch-breaks, rallies, and other gatherings.

Fountain square has many events all through the week including speeches, games, movies, concerts, giveaways, and festivals. The square also has many seasonal events such as Halloween on the square, the ice rink, Octoberfest (largest outside of Germany) and more. To celebrate the 40th anniversary of Earth Day 2010, the square featured "EcoSculpt 2010", an exhibit of sustainable art. The exhibit included "Atlas Recycled" by Tom Tsuchiya, a sculpture made of used atlases that doubled as a recycling receptacle for plastic bottles and aluminum cans.

The Public Library of Cincinnati and Hamilton County (PLCH) Sculpture is located in front of the public library on Vine Street. Established in 1853, the PLCH is one of the largest public library systems in the world. The PLCH Sculpture depicts stacks of books, at the center of which is a beautiful water fountain.
Image by Mr. T in DC on Flickr under Creative Commons License.
6

St. Paul Church was originally a Roman Catholic Church. It is located at the southeast corner of East 12th and Spring Streets. This brick Romanesque structure has broad Doric pilasters set in its corners and between its tall, round arched windows. It has a Renaissance tower capped with a Pope's Mitre cupola roof and gilded cross. A fire in 1899 destroyed all but the church walls and stained glass windows. The church was deconsecrated in 1974 and was added to the National Register of Historic Places that same year. In 1981, The Verdin Company, a bell and clock company, purchased the church, convent, schools, and rectory. The buildings were restored, and the church was transformed into a bell and clock museum/showroom. The other buildings were turned into art galleries.

The George H. Pendleton House is located at 559 Liberty Hill in the Prospect Hill Historic District of Cincinnati. From 1879 until his death in 1889, this was the residence of Senator George Hunt Pendleton. He was a lawyer and politician. As a U.S. Senator (1879-1885), Pendleton spearheaded civil service reform. He and his committee met here in 1882 to draft the Pendleton Act, creating the Civil Service merit system.

Elsinore Arch was listed as a historic structure in the National Register on March 3, 1980. The arch, at Gilbert Avenue and Elsinore Place, was constructed in 1883. That year, the Cincinnati Water Works wanted to extend its efficient water supply main tunnel 185 feet to the line at Gilbert Avenue. The main tunnel started at the reservoir in Eden Park. To control the flow of water at the base of the steep hill, a valve house was needed. What resulted is a Norman Romanesque Revival mini-castle. The structure consists of a cylindrical castellated tower joined to a smaller square tower by an archway.

The William Howard Taft National Historic Site is maintained by the National Park Service. It was established in 1969. At the site is the house where President of the United States and Chief Justice of the United States Supreme Court William Howard Taft was born in 1857; he lived in the house for most of his first 25 years. The home is located in the Mount Auburn Historic District, which was a once-affluent suburb about a mile (1.6 km) north of downtown Cincinnati. Today the home is within the Cincinnati city limits. The two-story Greek Revival house, built circa 1835, is a reminder of a different era.