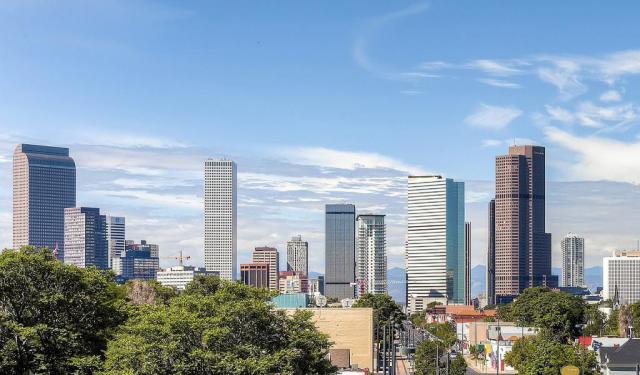 Image by Chachpond on Wikimedia under Creative Commons License.

The capital of Colorado is a bustling metropolis that has been in place since the Old West period. Today's Denver appeals to guests in many different ways. Downtown Denver is replete with both contemporary and historic sights, such as Denver Art Museum and Larimer Square, the city’s oldest block, featuring landmark 19th-century buildings. To explore these and other attractions of Denver, follow this orientation walk and enjoy!
How it works: Download the app "GPSmyCity: Walks in 1K+ Cities" from iTunes App Store or Google Play to your mobile phone or tablet. The app turns your mobile device into a personal tour guide and its built-in GPS navigation functions guide you from one tour stop to next. The app works offline, so no data plan is needed when traveling abroad.

Denver City Hall, also known as the City and County Building, was established in 1932. Its temple-shaped architecture was designed in the Neoclassical style. The building has two huge columns, bronze doors and a big clock at the top of the tower. Denver City Hall is one of the most impressive landmarks in the city. Facing the State Capitol, City Hall is famous for its fabulous Christmas lights that are on display during the holiday season.
Image by *clairity* on Flickr under Creative Commons License.
2

The Denver Mint is a branch of the United States Mint that struck its first coins on February 1, 1906. The mint is still operating and producing coins, as well as mint sets and commemorative coins, for circulation. Coins produced at the Denver Mint bear a D mint mark (not to be confused with the mark of the Dahlonega Mint). The Denver Mint is the single largest producer of coins in the world. The predecessors of the Denver Mint were the men of Clark, Gruber & Company. During the Pikes Peak Gold Rush, they coined gold dust brought from the gold fields by the miners. For almost three years, they minted gold coins (1860-61) and ingots (1862). They were formally bought by the US Treasury in 1863. Established by an Act of Congress on April 21, 1862, the United States Mint at Denver opened for business in late 1863 as a United States Assay Office.
Image by Larry D. Moore on Wikimedia under Creative Commons License.
Sight description based on wikipedia
3

The Byers–Evans house was built in 1883 by William Byers, the founder of the Rocky Mountain News and was sold to William Gray Evans in 1889. It is an Italianate style house which had several additions made to it over the years. William Evans lived in the home with his wife Cornelia Lunt Gray and their four children, John, Josephine, Margaret and Katharine.[3] William's mother, Margaret Patten Gray Evans, former first lady of Colorado, moved into the home in 1900 with her unmarried daughter, Anne Evans. Members of the Evans family continued to live in the home until 1981.

The house was donated to the Colorado Historical Society in 1981, along with the entire contents of the house. The house has been restored to the 1912–1924 period and includes approximately 90% of the original furniture, glassware, china, and other household items belonging to the Evans family.

Today the Byers–Evans house is a museum administered by History Colorado. Guided tours are provided.

Image by Jeffrey Beall on Wikimedia under Creative Commons License.
Sight description based on wikipedia
4

Civic Center is a Denver neighborhood and park. The area is known as the center of civic life in the city and is located near several government and cultural institutions. Numerous festivals, parades, and protests are held here throughout the year. The park is home to many fountains, statues, and formal gardens, and includes a Greek amphitheater, a war memorial, and the Voorhees Memorial Seal Pond. It is well known for its symmetrical Neoclassical design. Civic Center was an idea that originated with former Denver mayor Robert W. Speer. In 1904, Speer proposed a series of civic improvements based on the City Beautiful Ideas shown to him at the 1893 World Columbian Exposition in Chicago. Speer hired Charles Mulford Robinson among others to develop plans for the area. Robinson proposed extending 16th Street to the Colorado State Capitol and to group other municipal buildings around a central park area. However, the plan was defeated in a 1907 election.
Image by Vertigo700 on Wikimedia under Creative Commons License.
Sight description based on wikipedia
5

The Colorado State Capitol Building, located at 200 East Colfax Avenue, is the home of the Colorado General Assembly and the offices of the Governor of Colorado and Lieutenant Governor of Colorado. The building is intentionally reminiscent of the United States Capitol. Designed by Elijah E. Myers, it was constructed in the 1890s from Colorado white granite, and opened for use in November 1894. The distinctive gold dome consists of real gold plate, first added in 1908, commemorating the Colorado Gold Rush. The building is part of Denver's Civic Center area. Serving as the beginning of the Capitol Hill district, the historic building sits slightly higher than the rest of downtown Denver. The interior of the building uses copious amounts of Colorado Rose Onyx, a rare rose marble from a quarry near Beulah, Colorado. Many of the windows are stained glass, depicting people or events related to the history of Colorado.
Image by cris gonzales on Wikimedia under Creative Commons License.
Sight description based on wikipedia
6

The Brown Palace Hotel is the second-oldest hotel in Denver and is the first atrium-style hotel ever built. It is now operated by Quorum Hotels and Resorts. It was built in 1892, one year after the Oxford Hotel. It was named for its original owner, Henry Brown, and was designed with its odd triangular shape by architect Frank Edbrooke. The hotel is located at 321 17th St, between 17th street, Broadway and Tremont street/Pl in downtown Denver behind Republic Plaza. The main entrance door is on Tremont Street. Guests have included entrepreneurs, legislators, foreign officials and presidential guests Theodore Roosevelt, William Taft, Warren Harding, Harry S Truman, Dwight D. Eisenhower and Bill Clinton.
Image by Onetwo1 on Wikimedia under Creative Commons License.
Sight description based on wikipedia
7

Trinity United Methodist Church is a historic building designed in the Modern Gothic style in the 19th century. Some architectural details have since been added. The first thing you will notice about the church is its medieval iron gates and its copper cross that rises up in the sky. The church's tower used to be highest in the city, and its Victorian-era pipe organ was once the envy of the city.
Image by Nyttend on Wikimedia under Creative Commons License.
8

The Paramount Theatre is a concert venue located on Glenarm Place near Denver's famous 16th Street Mall. The venue has a seating capacity of 1,870, but is a popular destination for large acts looking for a smaller concert setting. The Paramount opened in 1930 as a movie theater, part of the Paramount-Publix Theatre Circuit, the exhibition arm of Paramount Pictures. The theater itself was designed by the Chicago architectural firm of Rapp and Rapp, with decorations by designer Vincent Mondo. The original main entry to the theater was at 519 16th Street, where an entrance lobby was cut through an existing commercial and office building. The three story office and commercial building on Glenarm Place was designed by local architect Temple H. Buell. Buell's design is a modernized, art deco interpretation of the Gothic style, executed largely in cast concrete and white terracotta.
Image by Hustvedt on Wikimedia under Creative Commons License.
Sight description based on wikipedia
9

16th Street Mall is a pedestrian and transit mall in downtown Denver. The mall, 1.25 miles long, runs along 16th Street from Wewatta Street (at Union Station) to the intersection of 16th Avenue and Broadway (at Civic Center Station). It is home to more than 300 stores and 50 restaurants, as well as the Denver Pavilions. The original 16th Street Mall opened in 1982, which ran from Market Street to Broadway, opened in 1982 and was designed by Pei Cobb Freed & Partners. Traditionally, street performing has been very popular on the mall, with many local folk, country, and vocal musicians gaining recognition in pop culture. Other types of performers, such as dancers, actors, impressionists, and comedians have also used the popular location as a prime venue for discovery. 16th Street Mall also has its share of unique performers, such as the robot man, who greets shoppers dressed in silver boxes and face paint.

Operation hours: 24/24
Image by cliff1066™ on Flickr under Creative Commons License.
Sight description based on wikipedia
10

The Daniels & Fisher (D&F) Tower is a distinctive Denver landmark. Built as part of the Daniels & Fisher department store in 1910, it was the tallest structure west of the Mississippi at the time, at a height of 325 feet (99 m). The building was designed by the architect Frederick Sterner and modeled after The Campanile (St. Mark's Bell Tower) at the Piazza San Marco in Venice, Italy. The 20-floor clock tower has clock faces on all four sides. Daniels & Fisher were later bought out by the May Company in 1958, and the store vacated the tower. When the store was demolished (ca. 1971), the tower was saved and renovated into lofts and businesses in 1981. It stands today in downtown Denver. The basement level of the D&F tower now hosts Lannie's Clocktower Cabaret, Lannie Garrett's own entertainment venue. The tower was listed on the National Register of Historic Places in 1969. A 2½ ton bell occupies the top two floors of the building, above the observation deck.
Image by cliff1066™ on Flickr under Creative Commons License.
Sight description based on wikipedia
11

Lannie’s Clocktower Cabaret is the perfect spot to let loose. Situated in central Denver, it is surrounded by hotels and shops and is always busy. Lannie's Cabaret is located in the D&F Clocktower, a historic building designed in the Italian Renaissance style. Come here to enjoy talented performers and entertaining shows.
Image by Mike Rogers on Flickr under Creative Commons License.
12

Larimer Square is an amazing old part of Denver located in the first downtown area. Now it is a fascinating place to shop, enjoy great food and see sights and other organized events along the year. It also presents an outstanding architectural view.
Image by DenverDwellings on Flickr under Creative Commons License.