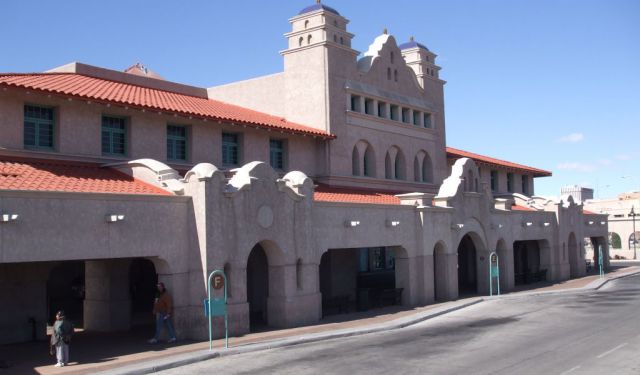 Image by Sunil060902 on Wikimedia under Creative Commons License.

Downtown Albuquerque features an amazing mix of past and future. It is the cultural, economic and social center of New Mexico. This neighborhood offers a wide range of unique entertainment facilities, fine restaurants, original boutiques. Even though this city is not famous for a large number of skyscrapers, it has a unique and spectacular architecture. The buildings are especially beautiful at night when their exterior is illuminated in different colors.This walking tour will lead you through some of the most well-known landmarks in Downtown Albuquerque.
How it works: Download the app "GPSmyCity: Walks in 1K+ Cities" from iTunes App Store or Google Play to your mobile phone or tablet. The app turns your mobile device into a personal tour guide and its built-in GPS navigation functions guide you from one tour stop to next. The app works offline, so no data plan is needed when traveling abroad.

The KiMo Theater is probably the city's best-known landmark. It was built in 1927 in the extravagant Art Deco-Pueblo Revival Style architecture. The KiMo was conceived by entrepreneur Oreste Bachechi and designed for him by Carl Boller of the Boller Brothers architecture firm, who conducted an extensive investigation into the cultures and building styles of the Southwest before submitting his design.
The theater is a three-story stucco building with the stepped massing characteristic of native pueblo architecture, as well as the recessed spandrels and strong vertical thrust of Art Deco skyscrapers. Both the exterior and interior of the building incorporate a variety of indigenous motifs, like the row of terra cotta shields above the third-floor windows. The KiMo Theater is rumored to be haunted by the ghost of Bobby Darnall, a six-year old boy killed when a water heater in the theater's lobby exploded in 1951.


Image by Camerafiend on Wikimedia under Creative Commons License.
Sight description based on wikipedia
2

The Federal Building and United States Courthouse, built in 1930, is a historic landmark in downtown Albuquerque, New Mexico. It is part of the complex of federal buildings on Gold Avenue that includes the Old Post Office, Dennis Chavez Federal Building, and the Federal Building. The imposing six-story building, faced with limestone and buff-colored terra-cotta tile in a brick pattern with molded inlays, is topped with a Mediterranean-style red tile roof and a domed cupola. The cornerstone of the Federal Building lists James A. Wetmore as the architect. However, it is unlikely that Wetmore, who was the Architect of the Treasury and was not a trained architect, designed the building.

The lobby of the Federal Building contains a mural by Loren Mozley titled The Rebellion of 1680 which depicts the Pueblo Revolt. Another mural, Justice Tempered with Mercy by Emil Bisttram, adorns the wall outside the District Courtroom on the sixth floor. This historically significant courtroom originally served as the Federal Courtroom until the U.S. Court relocated to the Dennis Chavez Building in 1972. It was restored to its original appearance in 1981. The Federal Building was listed on the National Register of Historic Places in 1980.
Image by Camerafiend on Wikimedia under Creative Commons License.
Sight description based on wikipedia
3

The Old Post Office is the oldest surviving federal building located at the northwest corner of Fourth and Gold in downtown Albuquerque. The Spanish Colonial Revival-style building was built in 1908 under the supervision of architect James Knox Taylor. Several federal agencies were initially housed in the Post Office building but it quickly became overcrowded, necessitating the construction of the Federal Building and U.S. Courthouse next door in 1930. The post office remained in the older building until 1972. Today the interior of the Old Post Office has been remodeled to house the Amy Biehl Charter High School. The Old Post Office was added to the National Register of Historic Places in 1980. The exterior of the original 1908 building and the 1932 addition are exposed to public view on the east, south, and west elevations. Both period exteriors consist of a limestone base, stucco finish painted brown up to the eaves, an exposed soffit with massive decorative rafter ends and a red clay tile roof. The 1908 windows and iron balconies are duplicated in the 1932 addition.
Image by PerryPlanet on Wikimedia under Creative Commons License.
Sight description based on wikipedia
4

The Occidental Life Building is a historic building located in downtown Albuquerque. It is a unique example of U.S. Venetian Gothic Revival architecture, modeled after Doge's Palace in Venice. It was designed by Henry C. Trost of the El Paso architectural firm Trost & Trost, and built for the Occidental Life Insurance Company in 1917.
The building's most significant feature is the white terra cotta facade, which wraps around the south and east sides of the building with bright white terra cotta tile and decorated with elaborate floral patterns. A row of pointed arches runs along each facade below a row of quatrefoil windows. When originally built, the Occidental Life Building had an overhanging cornice and wide arcades between the arches and the building proper. After a 1934 fire gutted the building, the roofline was rebuilt to more closely resemble Doge's and the interior office space was expanded, removing the arcades. The interior was rebuilt as a two-story office building in 1981, keeping the terra cotta exterior intact.
Image by John M. Hagstrom on Flickr under Creative Commons License.
Sight description based on wikipedia
5

The First National Bank Building is a historic building located in downtown Albuquerque. The nine-story, L-shaped building was the city's first skyscraper. Built in 1922, the First National Bank Building was designed by Trost & Trost, an El Paso architecture firm that was well known in the region. At 141 feet, it was by far the tallest building in the city until the International Style Simms Building was built in 1954. The interior of the first floor is done almost entirely in grey streak marble, and features 28-foot-tall vault ceilings. The building was owned by First National Bank until 1999, when it was purchased by a private developer with the intent to convert it into a luxury hotel. Plans later changed, and the building was instead remodeled into a high-end condominium project called The Banque Lofts, which opened in 2006.

A historic building in downtown Albuquerque, the six-story Sunshine Building was designed by the El Paso firm of Trost & Trost and built in 1924, originally housing offices and a 920-seat movie theater. It is of reinforced concrete construction, with a facade of yellow brick. F. D. Fogg and Company, Jewelers, operated a fine jewelry store in the building from 1948 until the 1970s. The store's classic neon sign and pink marble facade were recognized downtown Albuquerque landmarks throughout that period. The Sunshine Building was added to the National Register of Historic Places in 1985 and has been designated as a Historic Landmark by the city. The Sunshine Theater, which occupies a significant portion of the building, was Albuquerque's first movie palace. The theater stopped showing first-run movies in 1974 and closed completely in the 1980s, but has since been remodeled into a popular live music venue.
Image by Camerafiend on Wikimedia under Creative Commons License.
Sight description based on wikipedia
7

Albuquerque Plaza also known as the Bank of Albuquerque Tower is a 351 feet high-rise in Downtown Albuquerque. It is the tallest of a two tower complex that contains class-A office space connected at ground level by a two-story promenade containing retail space connecting to the shorter Hyatt Regency Albuquerque hotel tower. At 22 stories it is the tallest building in New Mexico. The hotel tower, with 21 stories, is the state's second tallest building at 256.0 feet. Their similar height, color, and pyramidal roofs make them the focal point of the Albuquerque skyline.

Albuquerque Plaza complex was designed by Hellmuth, Obata, & Kassabaum and built in 1990.With its central location in the downtown Albuquerque business district, and proximity to federal and state courthouses, the building is home to several major local law firms and GSA offices, and serves as headquarters for the Bank of Albuquerque, National Association. In 2002, the Bank of Albuquerque Tower was awarded BOMA’s “Office Building of the Year” award, which considers energy conservation as part of its judging criteria.

The Compass Bank Building is an 18-story building in downtown Albuquerque. The building consists of a twelve-story office block sitting on top of a six-story base containing a parking garage and 232,900 square feet of rentable office space. The Compass Bank Building was completed in 1968 and was originally called the National Building. At that time it was the tallest building the state in New Mexico. It has since been surpassed by both towers of Albuquerque Plaza in 1990, making it the third tallest building in the state.

Old Town, Albuquerque is an active commercial, residential and community center tracing history back to 1706. Buildings around the Old Town plaza are authentic adobes up to 300 years old. Many of them feature a distinctive Albuquerque's "Territorial Style". The Old Town is also famous as a thoroughfare place with a huge number of boutiques, restaurants and bars, much as for the...  view more