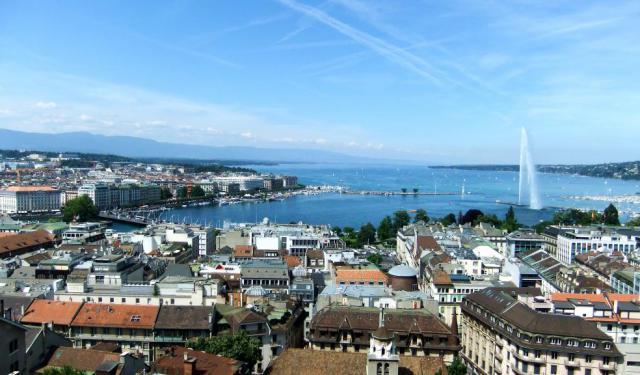 Geneva is a beautiful city that is worth visiting at any time of the year, as its beauty remains the same throughout the seasons. Mostly known as the city of watches and jewelery making, it has many more attractions to be discovered once you get there. The top landmarks of Geneva include the famous Jet D’eau and the Flower Clock. Take this tour to explore the top landmarks of the city of Geneva.
How it works: Download the app "GPSmyCity: Walks in 1K+ Cities" from iTunes App Store or Google Play to your mobile phone or tablet. The app turns your mobile device into a personal tour guide and its built-in GPS navigation functions guide you from one tour stop to next. The app works offline, so no data plan is needed when traveling abroad.

Image by Mike B in Colorado on Flickr under Creative Commons License.
Sight description based on wikipedia
2

The Place du Bourg-de-Four is one the most important squares in Geneva, due to its historic location and cultural value. It has been a much-visited place by the locals since Roman times, when it was used by the merchants as a place for commerce. Today, it represents a cool place for a stroll or some shopping, meeting with friends, or a bit of socializing and relaxing.
Image by Wouter Hagens on Wikimedia under Creative Commons License.
Sight description based on wikipedia
3

The Murs des Réformateurs was erected in 1909 in order to pay tribute to the reformist movement and its major figures: Jean Calvin, Théodore de Bèze and Guillaume Farel. The reformation wall is regarded as a religious site since it depicts important periods of time in the evolution of the movement, on its bas-reliefs, as well as different notable personalities that contributed to this movement.
Image by Ruth Nguyen on Wikimedia under Creative Commons License.
Sight description based on wikipedia
4

The Hotel de Ville serves as Geneva’s Town Hall, and the meeting place for representatives of the Republic and Canton of Geneva. This hotel is also of great historic importance, as here, many historical treaties have been signed. The 16th century architectural design boasts three stories of neoclassical design, with a large courtyard and a paved ramp, enclosed within a square tower.
Image by David Mellis on Wikimedia under Creative Commons License.
5

The Ancien Arsenal used to be a militarily strategic building in Geneva, due to its use as storage for arms and gun powder. The building’s architecture makes it look like a fortified mansion, with five cannons that are always ready to defend the city. Today, the Old Arsenal building houses the State Archives.
Image by Zeke on Wikimedia under Creative Commons License.
6

The Promenade de la Treille is a notable place in Geneva, because of its chestnut trees, and for having one of the largest wooden benches in the world. Initially designed as a defensive line and military post, it grew to be appreciated by the locals as the place for romantic walks. Here, you can sit and watch the daily life of the local people, walking and socializing.
Image by bensch80 on Flickr under Creative Commons License.
Sight description based on wikipedia
7

The Place du Molard is a very old shopping area in Geneva, used by merchants in the 16th-18th centuries to trade different items. Today, it hosts a myriad of small boutiques and big brand stores, as well as some excellent souvenir shops. Twice a week, the Place du Molard transforms into an open market and flea market organized by the local authorities.
Image by MHM55 on Wikimedia under Creative Commons License.
8

The Horloge du Passage Malbuisson is undeniably the most charming clock in Geneva. The clock hangs on a wall and is linked to sixteen bronze bells that chime a nice melody every hour. The hourly chiming is accompanied by forty-two animated figures. The mastermind behind this clock is a local watchmaker, Edouard Wirth, who wanted to express his gratitude to the city of Geneva.
Image by Peggy Sue on Flickr under Creative Commons License.
9

The Tour du Molard represents a stunning medieval piece of architecture located right in the heart of the city at the entrance to the Old Town. The Tower dates back to the 14th century and was a part of a defensive wall that protected the port of Molard. It has undergone some changes over the centuries, like painted friezes and images with coat of arms emblazoned on them, thus making it more attractive to the tourists that visit the Place de Molard.
Image by Benoît Prieur on Wikimedia under Creative Commons License.
Sight description based on wikipedia
10

The Horloge Fleurie is a truly unique clock, which is made of flowers and changes its colors according to the season. The Flower Clock is situated in the English Garden, one the greenest parks in the city of Geneva. The acclaimed clock has been in service since 1951, over which period it has never stopped, nor been out of order.
Image by Chabe01 on Wikimedia under Creative Commons License.
Sight description based on wikipedia
11

The Rue du Rhône represents one of the best-known shopping streets in Geneva. On this street you can find practically all the known brands, such as Armani, Chanel, Dior and many more. It is considered to be a posh shopping street, but, never the less, there are always sales taking place, so you can grab a bargain in one or more of the stores.
Image by MHM55 on Wikimedia under Creative Commons License.
12

The Jet d'Eau (Water-Jet) is a large fountain in Geneva, Switzerland, and is one of the city's most famous landmarks, being featured on the city's official tourism web site and on the official logo for Geneva's hosting of the 2008 UEFA Championships. It is also one of the largest fountains in the world. Situated at the point where Lake Geneva empties into the Rhône, it is visible throughout the city and from the air, even when flying over Geneva at an altitude of 10 km (33,000 ft). Five hundred litres (132 gallons) of water per second are jetted to an altitude of 140 metres (459 feet) by two 500 kW pumps, operating at 2,400 V, consuming over one megawatt of electricity. The water leaves the nozzle at a speed of 200 km/h (124 mph). When it is in operation, at any given moment there are about 7,000 litres (1849 gallons) of water in the air. Unsuspecting visitors to the fountain—which can be reached via a stone jetty from the left bank of the lake—may be surprised to find themselves drenched after a slight change in wind direction.
Image by Dennis Jarvis on Flickr under Creative Commons License.
Sight description based on wikipedia