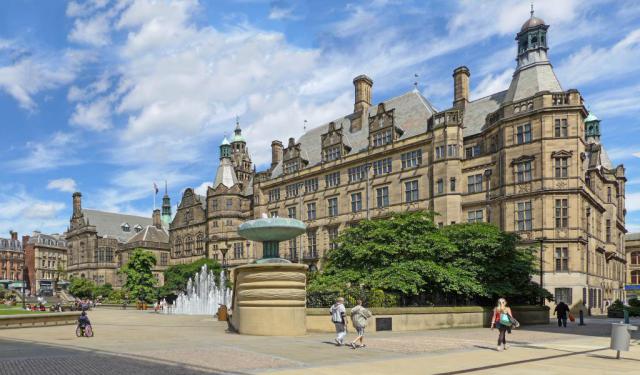 Image by Lighthelper :) on Flickr under Creative Commons License.

The city of Sheffield offers an abundance of fantastic museums and art galleries where one can go to enjoy the art and history of the city. Sheffield's museums and art galleries retell the history of life, history of music, history of arts, as well as the history of this beautiful city.
How it works: Download the app "GPSmyCity: Walks in 1K+ Cities" from iTunes App Store or Google Play to your mobile phone or tablet. The app turns your mobile device into a personal tour guide and its built-in GPS navigation functions guide you from one tour stop to next. The app works offline, so no data plan is needed when traveling abroad.

The Kelham Island Museum is an industrial museum on Alma Street, alongside the River Don, in the centre of The City of Sheffield, England. It was opened in 1982. The museum houses exhibitions on science and Sheffield industry, including examples of reconstructed little mesters' workshops and England's largest surviving Bessemer converter. The museum gives tours to local schools and has regular demonstrations of the 1905 River Don Engine, a 12,000 horsepower (9 MW) steam engine, which originally powered a local armour plate rolling mill. The engine is remarkable for its ability to change direction very quickly, a facet that was necessary for the efficient rolling of heavy steel. The engine rolled steel for nuclear reactors towards the end of its life (it was last used in production in 1974 at the River Don Works). The museum is operated by the Sheffield Industrial Museums Trust. It is an Anchor Point of ERIH, The European Route of Industrial Heritage.

Image by DncnH on Flickr under Creative Commons License.
Sight description based on wikipedia
2

The National Emergency Services Museum (previously known as Sheffield Fire and Police Museum) is a museum in Sheffield, England. Established in 1984, it is based at a former fire station (opened c.1900) at the junction of West Bar and Tenter Street near the city centre. A notable feature is the only remaining Fire Brigade observation tower in the UK. The collection covers law and order, and social history. The museum is run entirely by volunteers, and is open on Sundays, Bank Holidays and for special events or pre-arranged visits. It also has a number of paintings, including one by Sheffield artist Joe Scarborough.

Image by Chemical Engineer on Wikimedia under Creative Commons License.
Sight description based on wikipedia
3

Graves Art Gallery is in the centre of Sheffield above the Central Library and close to the Millennium Galleries. It shows permanent displays from the city’s collections of 19th and 20th century British and European art as well as a program of temporary exhibitions. The collection encapsulates the story of the development of Modern Art. The main trends and movements are traced through works by many well-known artists, from Pablo Picasso and Pierre Bonnard to Sir Stanley Spencer and Helen Chadwick. It is currently administered by the Sheffield Galleries and Museums Trust.

Image by Gregory Deryckère on Wikimedia under Creative Commons License.
Sight description based on wikipedia
4

The Millennium Galleries is an art gallery in the City of Sheffield, England. The gallery opened in April 2001 as part of Sheffield's Heart of the City project. The gallery is divided into four sections: the Special Exhibition Gallery hosts touring exhibitions from galleries like the Tate Gallery and the Victoria and Albert Museum, the Craft and Design Gallery shows the work of past and present craftsmen and designers, the Metalwork Gallery is designed to showcase Sheffield's metal industries, and the Ruskin Gallery hosts the collection of the Guild of St George, which was established in Sheffield by John Ruskin in the 19th century.

Operation hours: Monday - Saturday: 10 am - 5 pm; Sunday: 11 am - 4 pm; Thursday until 8 pm.
Image by Warofdreams on Wikimedia under Creative Commons License.
Sight description based on wikipedia
5

Yorkshire ArtSpace is a project established to provide studio space for artists which opened in October 2001 at the Persistence Works building in Sheffield, South Yorkshire, England. The Yorkshire ArtSpace Society, originally established in Sheffield in 1977 by a group of artists, aimed to provide accessible studio space. At that time, the Society was based at Washington Works, but only on a short term lease. Persistence Works was designed by Feilden Clegg Bradley Studios. It is the UK’s first purpose built studio complex for artists and craftspeople. The project has created studio space for sixty eight practicing artists and craftspeople in addition to exhibition, project, education and office spaces, The building won an RIBA Yorkshire White Rose award and a Civic Trust Award Commendation. It was also a finalist in the Prime Ministers’ Better Public Building Awards in 2002.