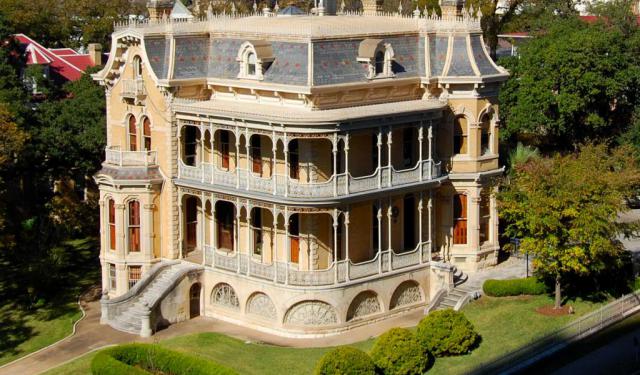 Image by LoneStarMike on Wikimedia under Creative Commons License.

Northwest downtown Austin boasts an impressive collection of historic residences of notable styles, ranging from classic Victorian to Georgian to Greek Revival. Carefully preserved and restored, these buildings form a major part of the city's cultural heritage. Take this self-guided tour for a quiet, much more peaceful stroll, as compared to that on the crowded Congress Avenue, for example, and explore a number of historically important houses and mansions of Austin.
How it works: Download the app "GPSmyCity: Walks in 1K+ Cities" from iTunes App Store or Google Play to your mobile phone or tablet. The app turns your mobile device into a personal tour guide and its built-in GPS navigation functions guide you from one tour stop to next. The app works offline, so no data plan is needed when traveling abroad.

On June 8, 2008, while midway through a major renovation, the mansion was damaged badly by an arson fire started with a Molotov cocktail.

Built by Abner Cook in a Greek Revival style and completed during 1856, the building occupies the center of a block and is surrounded by trees and gardens. The original mansion was 6,000 square feet (560 m2). Remodeling during 1914 increased the size of it to 8,920 square feet (829 m2). The original mansion had 11 rooms but no bathrooms. The remodeling brought the room count to 25 rooms and 7 bathrooms. In 1931, at the recommendation of former Texas First Lady Mildred Paxton Moody, the 42nd Texas Legislature established the Board of Mansion Supervisors to oversee all interior and exterior upkeep and enhancements to the mansion.

Image by Carol M. Highsmith on Wikimedia under Creative Commons License.
Sight description based on wikipedia
2

The Henry Hirshfeld House and Cottage are two historic homes in downtown Austin, Texas originally inhabited by the prominent Hirshfeld family. The cottage, built in 1873, housed Henry and his wife Jennie until the larger house was built in 1885. The homes have been well-preserved and today house the Office of Governmental Relations for the Texas A&M University System. The buildings were added together to the National Register of Historic Places in 1973.

Hirshfeld had one-story stone cottage built for his family in 1873. It features a widow's walk on the roof and jigsaw detailing on the porch. After the family moved to their new residence on the adjacent east lot in 1888, the cottage was maintained as rental property.

Image by Larry D. Moore on Wikimedia under Creative Commons License.
Sight description based on wikipedia
3

The John Bremond House is part of Bremond Block Historic District - a collection of eleven historic homes in downtown Austin, constructed from the 1850s to 1910.

The block was added to National Register of Historic Places in 1970, and is considered one of the few remaining upper-class Victorian neighborhoods of the middle to late nineteenth century in Texas. Six of these houses were built or expanded for members of the families of brothers Eugene and John Bremond, who were prominent in late-nineteenth-century Austin social, merchandising, and banking circles. They are located within the square block bordered by West Seventh, West Eighth, Guadalupe, and San Antonio streets. The district also includes several houses on the west side of San Antonio and the south side of West Seventh, at least three of which were built or altered by the North family.
Image by TaylorPeres on Wikimedia under Creative Commons License.
Sight description based on wikipedia
4

Built in 1876 for the family of Elizabeth and John Robinson Sr., this two-and-half-story farm house is a fine example of the Second Empire style of architecture coupled with Italianate detailing.

Located within the original 1839 Austin town plan drawn by Edwin Waller, it is in close proximity to the house built by the locally prominent Bremond family. It shares stylistic similarities with the Bremond house, now preserved as the Bremond Block Historic District. The Robinson's son, Eugene, purchased the house from the other Robinson heirs in 1902. The house was then bought in 1928 by Joe and Bridget Macken, in whose family it remained until 1983. Both John Robinson and Joe Macken were Austin community leaders, serving at different times as chief of the volunteer fire department and city alderman. Prominent features of the l-plan Robinson-Macken house include projecting bay windows with classical detailing, fine milled wood elements, dormer windows, and a mansard roof.
Image by Larry D. Moore on Wikimedia under Creative Commons License.
Sight description based on wikipedia
5

The Fischer House is a historic mansion in downtown Austin, completed in 1882. Its builder, Joseph Fischer, was a prominent mason in Austin at the time, and its bold high Victorian era, Italianate architecture and ornamentation reflect his family's skill in the trade.

The home is located at 1008 West Avenue. It was added to the National Register of Historic Places on December 16, 1982.
Image by Jfischer06 on Wikimedia under Creative Commons License.
Sight description based on wikipedia
6

The Brizendine House is a historic home in downtown Austin, constructed circa 1870. The building is located on 11th Street and is today surrounded by an annex to the Travis County Courthouse and the Blackwell/Thurman Criminal Justice Center. The house was added to the National Register of Historic Places in 1974.

This simple vernacular rough ashlar house represents the life style of the late 19th century working middle class family in Austin. The exterior proportions of the structure reflect Victorian influence. It was built of limestone about 1870 by John R. Brizendine (1829–1914), an Austin carpenter, machinist and miller, a native of Kentucky, who lived here until his death. Mrs. Elizabeth Gordon bought the home in 1928, and members of her family lived here until 1972.
Image by Larry D. Moore on Wikimedia under Creative Commons License.
Sight description based on wikipedia