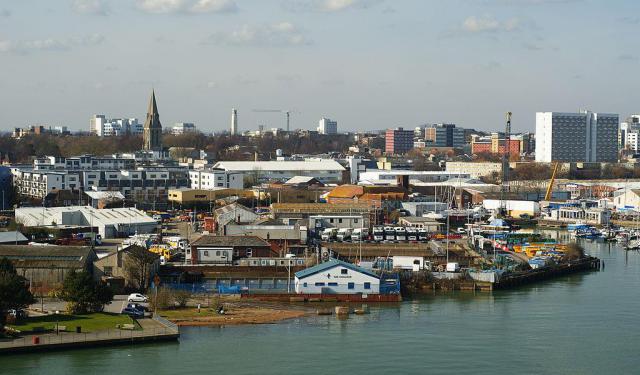 Image by Peter Trimming on Wikimedia under Creative Commons License.

One of England’s major seaports, Southampton went down in recent history primarily as the place from which the Titanic embarked on her maiden, ill-fated voyage in 1912. The local Maritime Museum and Titanic memorial pay tribute to that event, while Tudor House & Garden, together with the Museum of Archaeology, display artifacts covering over eight centuries of the city's history from the days predating the Norman Conquest. Follow this orientation walk to visit these and other locations, and acquaint yourself with the bustling past and present of Southampton.
How it works: Download the app "GPSmyCity: Walks in 1K+ Cities" from iTunes App Store or Google Play to your mobile phone or tablet. The app turns your mobile device into a personal tour guide and its built-in GPS navigation functions guide you from one tour stop to next. The app works offline, so no data plan is needed when traveling abroad.

Constructed in Norman times as part of the fortified walled city, the Bargate was the main point of entry and exit to and from the north. Since Southampton is on the south coast, this made the Bargate the main gateway to the city.

Constructed of stone and flint, the Bargate was built circa 1180. Additional archways were added in 1764 and 1774. Further alterations were made to the building around 1290, when large drum towers were added to the north side, with arrow slit windows.

The Bargate is now a meeting place for walking tours which are on Saturdays and Sundays and are really nice and interesting.

Image by geni on Wikimedia under Creative Commons License.
Sight description based on wikipedia
2

St. Michael's Church is the oldest building still in use in the city of Southampton, and is the only church still active of the five originally in the medieval walled town. The church is a Grade I Listed building.

Archaeological evidence has dated the foundation of the church at 1070 and the church was dedicated to St. Michael, patron saint of Normandy. The original church was built on a cruciform plan. The first documentary evidence of the existence of St. Michael's was in 1160 when Henry II granted the Chapels of St. Michael, Holyrood, St. Lawrence and All Saints to the monks of St. Denys, who retained the patronage until the Dissolution in 1537 when St. Michael's passed to the Crown.

The most famous tomb in the church is that of Sir Richard Lyster. Lyster was Chief Baron and later Lord Chief Justice of the Common pleas. His tomb was erected in 1567. The tomb is situated in the north-east corner of the church and is a delightful early-Elizabethan example of the use of fluted columns and other classical details. By the north-east corner of the tower is part of a 12th century gravestone, with a carving of a Bishop in mass vestments, holding a crozier. High on the south wall is a memorial to Bennet Langton, with Samuel Johnson's epitaph to his close friend.

Image by Alexander P Kapp on Wikimedia under Creative Commons License.
Sight description based on wikipedia
3

The house is built to a medieval right-angle, narrow plan design, with an undercroft to store wine at a constant temperature, and a first-storey bedchamber that projects out into the street to add additional space. Listed as a scheduled monument, the building is architecturally significant because, as historian Glyn Coppack highlights, it is "the only building of its type to survive substantially as first built".

Opened by Princess Victoria in 1833, over the 19th century this pier underwent many changes and was rebuilt in 1947. Bearing some Baroque and Art Deco features and nicknamed "wedding cake architecture" at the time for its ornate exterior, the pier houses several attractions.
Image by GaryReggae on Wikimedia under Creative Commons License.
5

The Tudor House, founded in 1495, is a significant landmark of England’s heritage. It has been owned by several important English figures, including Sir Richard Lyster and the Lord Chief Justice. Discover England’s fascinating history, with exhibits such as a minstrel's gallery and one of Henry VIII's cannons. You can take a wonderful walk in the beautiful Tudor Knot Garden, which houses several species of flowers and herbs. Enjoy the beauty of England’s nature at this great attraction!

Opening Hours:
Mon-Thu: 10am–3pm (last entry 2:15pm); Sat, Sun: 10am–5pm (last entry 4:15pm)
Please note that entrance to the garden is only available for those paying to visit the Museum or the Tea Room
Image by Peter Trimming on Wikimedia under Creative Commons License.
6

The Civic Centre, home of the Southampton City Council, houses a police station, council offices, the Guildhall venue, an art gallery and library. On July 1, 1930 Prince Albert, Duke of York laid the foundation stone in a ceremony presided over by mayor Hector Young. The south block, the municipal offices, was the first to be opened. This too was opened by the Duke of York and his wife, the Duchess of York, on November 8, 1932. The second block, opened in 1933 by Viscount Sankey, the Lord Chancellor, was the west block, the law courts, which includes the famous clock tower, known at the time as Kimber's Chimney, after the former mayor. The final block was the north one, the arts wing. Today, this section contains the Central Library and the City Art Gallery.
Image by AlanFord on Wikimedia under Creative Commons License.
Sight description based on wikipedia
7

The Titanic Engineers' Memorial is a memorial in East (Andrews) Park, Southampton, to those who died in the RMS Titanic disaster on 15 April 1912. The bronze and granite memorial was originally unveiled by Sir Archibald Denny, president of the Institute of Marine Engineers on 22 April 1914. The event was attended by an estimated 100,000 Southampton residents.

The monument was originally erected with funding from worldwide donations. It was designed and built by Whitehead and Son of the Imperial Works, Kennington Oval in London. It is officially a Grade II listed building. It features a bronze statue of Nike, the Greek Winged Goddess of Victory, created by Trieste-born sculptor Romeo Rathmann, and carvings which represent the engineer officers of the ship, who died in the disaster.

On a sunny afternoon on 22 April 1914, 100,000 people gathered in Andrews Park, Southampton to witness the unveiling of the memorial to the engineers who lost their lives on the Titanic two years earlier. The bronze and granite structure was draped in the Union flag.

The monument was restored in 2010 in a joint venture between Southampton City Council and TV production company Twenty Twenty Television. Almost opposite the main memorial, on the corner of Cumberland Place and London Road, is the Titanic Musicians' Memorial to Wallace Hartley and the other musicians who played on the Titanic.
Image by AlanFord on Wikimedia under Creative Commons License.
Sight description based on wikipedia
8

Old Town Southampton is famous for its beautiful parks, containing several blocks covered with green paths, trees, fountains and memorials. It includes Hoglands, Houndwell, Palmerstone, Andrews and Watts Parks, with paths leading from one to the other. These attractions are popular with both locals and tourists.
Image by treehouse1977 on Flickr under Creative Commons License.
9

Above Bar Street is Southampton’s main shopping area. Besides cafes and restaurants, you can enjoy its many shops, such as British Book Shops, Our Price, where you will find a great selection of music, Picketts & Pursers for beautiful jewelery and much more.
Image by GaryReggae on Wikimedia under Creative Commons License.