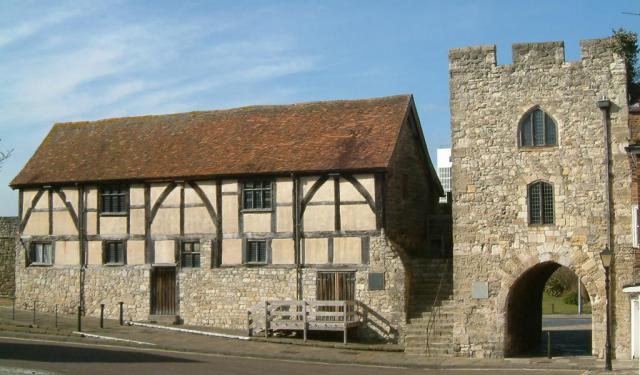 Southampton is a large beautiful city and a popular spot for tourists. It has a variety of interesting cultural attractions to visit, including museums, theaters, beautiful buildings and much more. Discover England’s tradition of art and history in the following tour.
How it works: Download the app "GPSmyCity: Walks in 1K+ Cities" from iTunes App Store or Google Play to your mobile phone or tablet. The app turns your mobile device into a personal tour guide and its built-in GPS navigation functions guide you from one tour stop to next. The app works offline, so no data plan is needed when traveling abroad.

The house is built to a medieval right-angle, narrow plan design, with an undercroft to store wine at a constant temperature, and a first-storey bedchamber that projects out into the street to add additional space. Listed as a scheduled monument, the building is architecturally significant because, as historian Glyn Coppack highlights, it is "the only building of its type to survive substantially as first built".


Image by geni on Wikimedia under Creative Commons License.
Sight description based on wikipedia
2

The Tudor House, founded in 1495, is a significant landmark of England’s heritage. It has been owned by several important English figures, including Sir Richard Lyster and the Lord Chief Justice. Discover England’s fascinating history, with exhibits such as a minstrel's gallery and one of Henry VIII's cannons. You can take a wonderful walk in the beautiful Tudor Knot Garden, which houses several species of flowers and herbs. Enjoy the beauty of England’s nature at this great attraction!

Opening Hours:
Mon-Thu: 10am–3pm (last entry 2:15pm); Sat, Sun: 10am–5pm (last entry 4:15pm)
Please note that entrance to the garden is only available for those paying to visit the Museum or the Tea Room

Image by Peter Trimming on Wikimedia under Creative Commons License.
3

Constructed in Norman times as part of the fortified walled city, the Bargate was the main point of entry and exit to and from the north. Since Southampton is on the south coast, this made the Bargate the main gateway to the city.

Constructed of stone and flint, the Bargate was built circa 1180. Additional archways were added in 1764 and 1774. Further alterations were made to the building around 1290, when large drum towers were added to the north side, with arrow slit windows.

The Bargate is now a meeting place for walking tours which are on Saturdays and Sundays and are really nice and interesting.
Image by geni on Wikimedia under Creative Commons License.
Sight description based on wikipedia
4

The Southampton City Art Gallery is an art gallery in Southampton, located in the Civic Centre on Commercial Road. The gallery's art collection covers six centuries of European art history, with over 3,500 works. It is housed in an example of 1930s municipal architecture. The gallery holds a Designated Collection, considered of national importance. Highlights of the permanent collection include a 14th-century altarpiece by Allegretto Nuzi; the Perseus series by Burne-Jones; paintings by the Camden Town Group; sculpture by Richard Deacon and Tony Cragg; and Richard Long photographs.

Thousands of visitors explore the exhibitions and displays every month and, through a programme of educational activities, Southampton City Art Gallery provides opportunities for greater access, involvement and understanding of art, for people of all ages. The gallery's educational service works closely with a range of profesional visual artists, including Melanie Rose, Debra Marsh, Jo Bresloff and Alastair Eales. Southampton City Art Gallery has won several awards and continues to be one of Southampton's most popular visitor attractions.

The Mayflower is a Grade II listed theatre, in the city centre of Southampton, with a capacity of 2,300. It features West End theatre shows when they tour the UK. The theatre opened on the 22 December 1928, as The Empire Theatre, part of the Moss Empire theatre group. It was part of the company's expansion of the late 1920s, which also saw theatres constructed in Edinburgh, Glasgow, Liverpool, Oxford and The Dominion, in London.

Also in 2009, The Mayflower welcomed West Side Story, Calendar Girls and Evita, among other shows, before closing for three months, for massive development of the backstage areas, including a new scene dock and also refurbishment of the stalls and circle bar. The Season then continued, with LazyTown Live! The Pirate Adventure, followed by shows, including The Sound of Music and High School Musical 2. Shows already announced for 2010 included a return of Chitty Chitty Bang Bang and the first national tour of Hairspray. The Theatre has also been chosen for the 25th anniversary tour of Les Misérables booking from 24 August to 11 September.