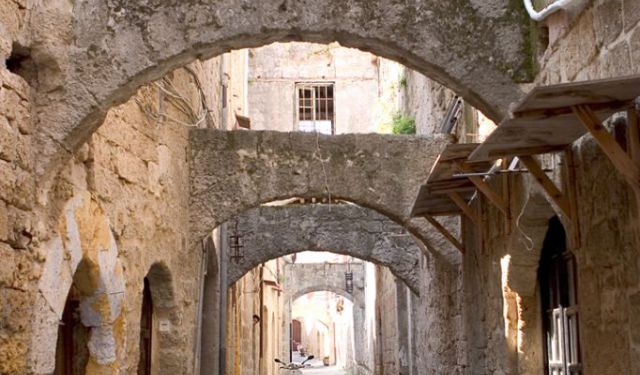 Image by David Dennis on Wikimedia under Creative Commons License.

The medieval town of Rhodes is a world cultural heritage site. It is like an open air museum, as every street, square or building evokes a story about the city's ancient times. It is one of the best-preserved medieval walled cities in Europe and has 6,000 inhabitants. Take this tour of Old Town and visit the area's most notable landmarks.
How it works: Download the app "GPSmyCity: Walks in 1K+ Cities" from iTunes App Store or Google Play to your mobile phone or tablet. The app turns your mobile device into a personal tour guide and its built-in GPS navigation functions guide you from one tour stop to next. The app works offline, so no data plan is needed when traveling abroad.

1) Municipal Garden of Rhodes (Sound and Light Show) (must see)

The Sound and Light Show in the Municipal Garden of Rhodes is one of the island’s most popular tourist attractions. It is a one of a kind event in Greece and provides an excellent introduction to Rhodes’ colorful history. The event combines drama, light and sound to produce a show that is of great educational and entertainment value for all the family. There are ancient myths and legends relating to Rhodes that are included in the spectacle along with recreations of some of the most dramatic historic events on the island, including sieges by the Ottoman Turks against the Knights Hospitaller. Along with important historic periods, several Rhodes landmarks tend to feature heavily in the performance; among them, the Palace of the Grand Master and the Tower of Suleiman.

The event does not run all throughout the year, but tends to be held from May to October each year, during the warmer months. It has been held annually since 1961 and has continued to grow in atmosphere and spectacle, as well as popularity, throughout the years. The venue has been renovated by the local government in recent years and it is shown in five different languages.

Image by sisaphus on Flickr under Creative Commons License.
2

The Temple of Aphrodite is located on Symi Square in front of the Eleftherias Gate in Rhodes. It dates from the third century BC. Today the ruins recall the former glory of the ancient temple dedicated to the god Aphrodite. Visit this popular attraction in Old Town Rhodes.
Image by Piotrus on Wikimedia under Creative Commons License.
3

3) Street of The Knights (Ipoton Street) (must see)

The Street of the Knights is located in upper Old Town. It is one of the most popular, famous and historical streets in this part of the city. It runs for about 600 meters, and it was where knights lived and worked in years past. It was well restored by the Italians in 1913-1916. The street is straight, and tall buildings border either side. Knights used to live, pray and train in these buildings. The view of street is majestic and will transport you back to medieval times.
Image by Oren Rozen on Wikimedia under Creative Commons License.
4

The Palace of the Grand Master of the Knights of Rhodes is a palace that was built in the 14th century by the Knights of Rhodes, who occupied Rhodes from 1309 to 1522. After the island was captured by the Ottoman Empire, the palace was used as a fortress. The original palace was largely destroyed by an ammunition explosion in 1856. When the Kingdom of Italy occupied Rhodes in 1912, the Italians rebuilt the palace in a grandiose pseudo-medieval style as a holiday residence for Victor Emmanuel III of Italy and later for Benito Mussolini, whose name can still be seen on a large plaque near the entrance. On February 10, 1947, the Treaty of Peace with Italy, one of the Paris Peace Treaties, determined that the recently-established Italian Republic would transfer the Dodecanese to the Kingdom of Greece. In 1948, Rhodes and the rest of the Dodecanese were transferred as previously agreed. The Greeks converted the palace to a museum.
Image by Adam Carr on Wikimedia under Creative Commons License.
Sight description based on wikipedia
5

The Municipal Baths (also called the Turkish Baths) are located on Platia Arionos. The baths are housed in a 17th-century Byzantine building. This is one of the few places in Greece where you can experience Hammam (a Turkish word for “baths"). The baths are open from Tuesday to Saturday. The low cost of the baths attract both locals and visitors. There are separate entrances for men and women.
Image by Davide Di Martino on Flickr under Creative Commons License.
6

Ippokratous Square lies in the medieval walled city of Rhodes. In the center of the square stands an ornamental fountain, which, along with a grand staircase from the south west section, is the only remaining evidence of the Castellania, an important building constructed by the Knights Hospitaller in the 14th century. When you enter the Old City by the Marine Gate, you will find yourself in Ippokratous Square, which is a great place to begin exploring the UNESCO World Heritage Site. The square is very popular with locals and tourists alike, who enjoy coffee, dining or drinks from one of the many alfresco cafes and bars that are scattered around its periphery. Stopping here to soak up the atmosphere at one of the cafes and to boost your energy for exploring the old city is a memorable experience.

There are also a number of cultural and historic sites on Ippokratous Square, including the Castellania Library, which is a treasure trove of ancient books and documents. The library is housed in Epavlis Mansion and features a music department and exhibition space along with the library tomes. It is also at Ippokratous Square that Sokratous Street, one of the most popular commercial streets on the island, begins.

Image by Clarence on Wikimedia under Creative Commons License.
7

The Square of Jewish Martyrs is also called Sea Horse Square, because there is a charming sea horse fountain located here. The square's Holocaust Memorial pays tribute to the 1,604 Jews of Rhodes that were sent to die at Auschwitz. Only 151 Jews survived the Holocaust. Today there are only about 35 Jews living in Rhodes.
Image by Kadellar on Wikimedia under Creative Commons License.
8

8) Church of the Virgin of the Burgh

The Church of the Virgin of the Burgh lies at the eastern edge of the Rhodes Old City, in the Jewish Quarter. The 14th century construction is one of the oldest remaining buildings from the era of the Knights of Hospitaller during medieval times. Its grand, original Gothic style remains impressive, even though it sadly suffered damage from bombing during World War II. Only three of the church’s apses have survived unharmed and, despite the heavy damage, it retains a strong spiritual air and you can often find painters and artists gathered there soaking up the inspiration in the air. It was considered to be the most important Catholic Church on Rhodes, but, following the extensive damage, is no longer used.

Located within the Old City, the church forms part of the UNESCO World Heritage Site. It was built in 1300 and used by the Knights of St. John Hospitaller. Until its partial destruction, it was the largest church within the Old City. There are no formal opening times or admission to the church, but you are free to stroll among the ruins. It is a popular place for people to rest while exploring the medieval town.