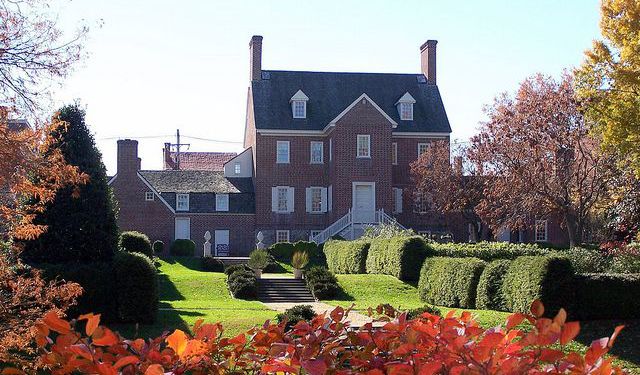 Annapolis is an attractive city and its landmarks bustle with five parts red brick mansions, all of them under 2 1/2-storeys. You will also find splendid mansion interiors with accents on woodwork or other elements of the prevailing Georgian style. Take a walk through the great tale of little historic houses in Annapolis.
How it works: Download the app "GPSmyCity: Walks in 1K+ Cities" from iTunes App Store or Google Play to your mobile phone or tablet. The app turns your mobile device into a personal tour guide and its built-in GPS navigation functions guide you from one tour stop to next. The app works offline, so no data plan is needed when traveling abroad.

The Hammond-Harwood House is one of the premier colonial houses remaining in America from the British colonial period (1607–1776). It is the only existing work of colonial academic architecture that was principally designed from a plate in Andrea Palladio’s I Quattro Libri dell’Architettura.

The house was designed by the architect William Buckland in 1773-74. The house ranks architecturally with many of the great mansions built in the late Colonial period; however, it is the only house directly inspired from a plate in Palladio’s, I Quattro Libri dell’Architettura.

It is arguably the most exquisite house remaining from the Colonial period in America. The Hammond-Harwood House is a five-part brick house with a five-bay two-story central block, two-story end wings and one-story connecting hyphens on either side. The central block has a shallow hipped roof. The wings project toward the street with three-sided hipped-roof bays. The hyphens are rendered as a blind arcade, with the central bay a door opening with a pediment above. There is little decoration, with plain rubbed brick flat arches over the windows. The interior presents the appearance of symmetry where it is in fact not symmetrical, using false doors where necessary to maintain the illusion.


Image by Mike Fedore on Flickr under Creative Commons License.
Sight description based on wikipedia
2

The Chase-Lloyd House in Annapolis, Maryland is a brick three-story Georgian mansion dating from 1769-1774 with interiors by William Buckland.

Its construction was started for Samuel Chase, who would later be a signatory to the Declaration of Independence and Associate Justice of the Supreme Court, but Chase sold the building unfinished to Edward Lloyd IV in 1771. Lloyd completed the house in 1774 with assistance from Buckland and another architect, William Noke. The house remained in the Lloyd family until 1847, when it was sold back to descendants of Chase.

The house's plan is of the four room, center hall type, but on a very large scale. The entrance hall contains a screen of free-standing Ionic order Ionic columns, beyond which a central stair rises to the large Palladian window at the landing. The ascending stair flights split at the landing, rising in parallel runs to flank the first run on either side. In 1888 the house was bequeathed for use as a home for elderly women. It continues in this use today. While the upper floors are off limits to visitors, the main floor and the extensive gardens are open to the public. The house was designated a National Historic Landmark in 1970.
Image by Pubdog on Wikimedia under Creative Commons License.
Sight description based on wikipedia
3

The William Paca House is a historic landmark in Annapolis. The house was constructed in 1765, with its architecture designed by William Paca himself. The Paca House and Garden were built in Georgian style and consist of five brickwork parts. These are the central 2 1/2-storey blocks on a higher platform, the latter being flanked by symmetrical 1 1/2-storey end pavilions. The parts are connected by 1 1/2-storey hyphens. The building's beautiful interior boasts original woodwork and other decorations, keeping the style of the Georgian Era. The William Paca House is an important piece of history and architecture, as it pertains to the Declaration of Independence. The gardens represent precise geometric parterres of three-season blooming flowers, recreating the 18th century garden, familiar from books and letters. Both house and garden are open for visitors Monday to Saturday, from 10 AM to 5 PM, and Sundays from 10 AM to 5 PM (last tour at 3.30 PM).
Image by Pubdog on Wikimedia under Creative Commons License.
4

The Brice House is, along with the Hammond-Harwood House and the William Paca House, one of three similar preserved 18th century Georgian style brick houses in Annapolis. It is a five-part brick mansion with a large central block and flanking pavilions with connecting hyphens.

Of the three, the Brice House's exterior is the most austere, giving its brickwork particular prominence. The interior is more richly detailed, and has been attributed to William Buckland. The Brice House was declared a National Historic Landmark in 1970.

The Brice house was built by James Brice, who served as Mayor of Annapolis and as acting Governor of Maryland in 1792. Archeological excavations at the Brice House in 1998 uncovered hoodoo caches, spiritual offerings placed by African-American slaves who were house servants at the mansion. The Brice House is a simplified Georgian-style mansion that relies on its elevated site along a narrow street, its scale and the mass of its brickwork to make it one of the most impressive buildings of its style in the United States.
Image by Pubdog on Wikimedia under Creative Commons License.
Sight description based on wikipedia
5

The Patrick Creagh House is a historic home. It is a single-pile, 1 1⁄2-story brick house with a steeply pitched gambrel roof.

The house was originally built between 1735 and 1747 by local craftsman Patrick Creagh, and enlarged during the late 18th or early 19th centuries. In the early 19th century, the property was purchased by free African-American John Smith, whose wife operated Aunt Lucy’s Bakeshop at the corner of Main and Greene Streets. The Patrick Creagh House was listed on the National Register of Historic Places in 1973.
Image by Pubdog on Wikimedia under Creative Commons License.
Sight description based on wikipedia
6

Built around 1715, the Shiplap House is one of the oldest buildings in Annapolis, which still retains the beauty of its time. The traditional red brick house name "shiplap" comes from its design, meaning a technique used for shipbuilding which is actually the process of siding the exterior on the building's rear. The Shiplap's House owner was Edward Smith who also lived there with his wife and kept it as an inn and a tavern. As it is a beautiful architectural piece, the house is marked as a national landmark and is the office of the Historic Annapolis Foundation.
Image by Michael Bell on Flickr under Creative Commons License.
7

The Artisan's House is a historic house built in 1777. The house is popular as it is represents 18th century modest middle-class dwellings. The 1 1/2-storey house features English bond brick, original random-width beaded weather-boarding and cornerboards, and the front façade with the traditional 6-panel door. The Artisan's House is famous due to its history, as it was used to host troops during the Revolutionary War.
Image by Pubdog on Wikimedia under Creative Commons License.
8

The Annapolis Summer Garden Theatre began its existence in the Paca House and Garden in 1966. Today, it is located in the the Old Shaw Blacksmith Shop on Compromise Street, near the museum store of the Historic Annapolis Foundation. The Old Shaw Blacksmith Shop is mentioned in the Annapolis archives in 1696; recently it has become a cultural landmark in the city's Registered Historic District. At some point, around 1983, the house underwent renovations. Today, the building is a piece of historic beauty right in the city's core.
Image by Lkwintherhansen on Wikimedia under Creative Commons License.
9

The brick home was constructed by John Callahan, a prominent and wealthy Annapolitan who served as the Register of the Western Shore Land Office between 1778 and 1803, around 1785-90. It has been moved twice in efforts to prevent its demolition. In 1900-01, the house was relocated to St. John’s Street and then to its present site on Conduit Street in 1972.

The home features an unusual gable-end principal façade and a largely intact Georgian/Federal interior finishes. It once served as St. John's College Infirmary. It was first listed on the National Register of Historic Places on November 12, 1971 fter its relocation in 1972, it was listed again in 1973. It is a contributing property in the Colonial Annapolis Historic District.
Image by Pubdog on Wikimedia under Creative Commons License.
Sight description based on wikipedia
10

The Upton Scott House is a historic home. It is a 21 ⁄ 2-story, rectangular brick house. The interior is lavish, and the house has sustained only minor alterations in the 20th century. The house was built for Dr. Upton Scott, the personal physician to the Royal Governor of the Province of Maryland, and is of the transitional Georgian style.

The house was built by William Brown, and closely resembles Brown's house on the South River, now known as the London Town Publik House. The Upton Scott House was listed on the National Register of Historic Places in 1975.
Image by Bottlesplus on Flickr under Creative Commons License.
Sight description based on wikipedia

Established in 1845 under George Bancroft, the US Naval Academy is Annapolis' most prominent complex, situated right at the confluence of Severn River and Chesapeake Bay. The Academy's campus has on its territory some of the most beautiful structures in the city. Following this guide, you will find a variety of attractions, including the museum, outstanding buildings, some monuments, the...  view more

In addition to the historic houses of Annapolis, the city is home to more great pieces of culture and history, such as the First Presbyterian Church and St. Mary's Parish, the fabulous Kunta Kinte-Alex Haley Memorial in the City Dock, etc. You will also be able to take a walk to the Eastport neighborhood to see the Maritime Museum and get familiar with the boating community of Annapolis.