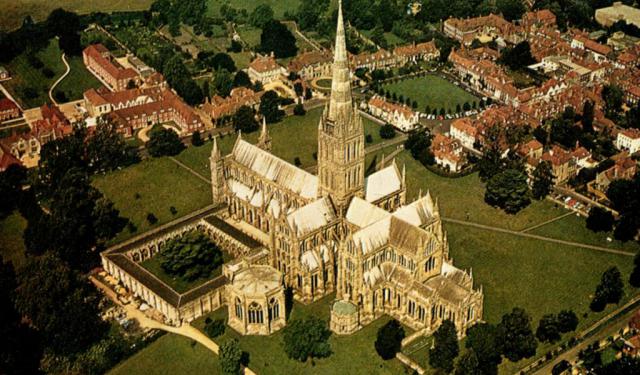 Image by Immanuel Giel on Wikimedia under Creative Commons License.

Cathedral and Cathedral Close Tour of Salisbury (Self Guided), Salisbury

Salisbury Cathedral is renowned throughout the world. The Cathedral Close is a marvelous setting for the 13th-century Church of the Blessed Virgin Mary, otherwise known as Salisbury Cathedral. Take this tour to stroll around Salisbury's most famous landmarks and appreciate the stunning architecture and craftsmanship of the Cathedral and Close.
How it works: Download the app "GPSmyCity: Walks in 1K+ Cities" from iTunes App Store or Google Play to your mobile phone or tablet. The app turns your mobile device into a personal tour guide and its built-in GPS navigation functions guide you from one tour stop to next. The app works offline, so no data plan is needed when traveling abroad.

High Street Gate was built in the mid-13th century and is the main entrance into the Close. It‘s one of four gates around the Cathedral. The Gate has a portcullis that is still locked in the evening and reopened in the morning. There is a solitary sculpture of a knight on the inner side of the wall and a Royal Coat of Arms on the outer side. The Porter's Lodge building is at High Street Gate. The porter’s post was once very prestigious among courtiers.
Image by jojo-bean on Flickr under Creative Commons License.
2

The Matron's College was built in 1682 as a permanent residence for about 10 widows of the Exeter diocese clergy. The Matron's College remains a charitable institution to this day. Originally applicants to the college had to be widows with money who were over 50, sober-minded and religious. Today the charitable Matron's College caters to local single women. The college building has a striking crest of arms on the exterior.
Image by Neosnaps on Flickr under Creative Commons License.
3

Mompesson House is an elegant Queen Anne-style house, which was built in 1701 for the Mompessons, a prominent merchant family. Today it is under the protection of the National Trust. Its spacious interior features a carved timber staircase, original paneling and fine plasterwork. The apartments are furnished in period style. Mompesson House displays Captain Turnbull's collection of 18th-century drinking glasses. There is a charming walled garden adjacent to the house.
Image by Seb Ballard on Wikimedia under Creative Commons License.
4

The Rifles (Berkshire & Wiltshire) Museum opened in 1981. The museum occupies a building that was constructed in 1254. The primary shape of the main hall and two service annexes still remains, but the current layout was established during a reconstruction in the 19th century. The Rifles (Berkshire & Wiltshire) Museum is also known as The Wardrobe, because it was used as a depot and administrative base by clergymen. The museum collection showcases the heritage of the County Regiments of Berkshire and Wiltshire. You can explore the regimental library and archive by appointment. After checking out the museum's extensive collection, you can wander along the beautiful riverside gardens.
Image by Andrew Dunn on Wikimedia under Creative Commons License.
5

The Old Deanery was built in the 1270s and served as the primary accommodations for the Deans for more than 700 years. Today the Deanery encompasses three medieval houses along the River Avon, which remain in perfect condition after extensive restorations in 1963, 1982 and 1995. The Medieval Hall is the complex's Banqueting Hall. The hall has a timber-framed roof and stone walls. Inside you will find the High Table, the old hearth and an original 13th-century wall painting. 'Secrets of Salisbury' is a 30-minute video about Salisbury’s history that runs hourly from April to September in the Hall.
Image by Samantha Smith on Flickr under Creative Commons License.
6

Salisbury and South Wiltshire Museum, commonly known as Salisbury Museum houses one of the best collections relating to Stonehenge and local archaeology. The museum itself is housed in The King's House, a Grade I listed building, where King James I of England was entertained in 1610 and 1613. Set in the surroundings of the Salisbury Cathedral Close, the museum faces the west front of Salisbury Cathedral.

The original three-storey building with mullioned and transomed windows, ornate plaster ceilings and a fine oak-balustraded staircase, houses the main temporary exhibition gallery, with the ceramics gallery above. The arms of James I's eldest son, Henry Frederick, Prince of Wales, can be seen in a window in the Wedgewood gallery upstairs. The Museum displays questions of how and when the Stonehenge monument may have been constructed. The Museum houses a number of images of Stonehenge as seen through the eyes of artists, including a watercolour by JMW Turner. The gallery explores the history of archaeological research on this landmark site.

Image by SalisburyMuseum1 on Wikimedia under Creative Commons License.
Sight description based on wikipedia
7

Salisbury Cathedral, formally known as the Cathedral Church of the Blessed Virgin Mary, is an Anglican cathedral in Salisbury and is considered one of the leading examples of Early English architecture. The cathedral has the tallest church spire in the United Kingdom (123m/404 ft). Visitors can take the "Tower Tour" where the interior of the hollow spire, with its ancient wood scaffolding, can be viewed. The cathedral also has the largest cloister and the largest cathedral close in Britain. The Cathedral contains the world's oldest working clock (from AD 1386) and has the best surviving of the four original copies of Magna Carta. Although commonly known as Salisbury Cathedral, the official name is the Cathedral of Saint Mary. In 2008, the cathedral celebrated the 750th anniversary of its consecration in 1258.

As a response to deteriorating relations between the clergy and the military at Old Sarum, the cathedral was moved to its present place in Salisbury. Legend has it that the Bishop of Old Sarum shot an arrow in the direction he would build the cathedral; the arrow hit a deer and the deer finally died in the place where Salisbury Cathedral is now. The foundation stone was laid on 28 April 1220.Due to the high water table in the new location, the cathedral was built on only four feet of foundations, and by 1258 the nave, transepts and choir were complete. The west front was ready by 1265. The cloisters and chapter house were completed around 1280. Because the cathedral was built in 38 years, Salisbury Cathedral has a single consistent architectural style, Early English Gothic.

Sarum College, built in 1677, is listed on the Statutory List of Buildings of Special Architectural or Historic Interest. Salisbury and Wells Theological College occupied the building until Sarum College took over in 1995. The college has a large theological library, with a collection of 35,000 titles. In addition to providing space for theological classes, the college building serves as a conference center as well.
Image by surprise truck on Flickr under Creative Commons License.
9

The Bishop’s Palace, built in 1220, was the first structure erected in the Close. The west annex of the palace is the oldest, with the Bishop`s great hall located on the lower floor. The tower at the east annex and the colossal new great hall were built a century later. The Bishop’s Palace has had many interior renovations over the years. It has served as a residence for kings and bishops, a meeting place for Parliament and even as apartments and an ale house during the Civil War. It is now the Cathedral School. A collection of the portraits of Bishops of Salisbury are on display at the palace.
Image by PhillipC on Flickr under Creative Commons License.
10

The fascinating Malmesbury House was a 13th-century canonry. Currently the house displays the personal belongings of the Harris family, who lived in the house beginning in 1660. It was later one of the residences of the Earls of Malmesbury. The house has a remarkable blue and gold sundial that dates back to 1749. The interior features fine rococo plasterwork and a beautiful staircase. It is famous for the legends of its former owners, as well as its secret rooms, peepholes and rumored ghost. You can visit the house by guided tour only.
Image by Peter Facey on Wikimedia under Creative Commons License.
11

St. Ann Gate is the east entrance to the Close. The Wall and the Gate were built in the 14th century. Before 1330 a channel of water from the River Avon divided the Close from the town. For the construction of the wall surrounding the Cathedral, blocks were taken from Old Sarum Cathedral. St. Ann Gate is stone gatehouse, and it formerly served as a canonry. It is famous for the fact that the composer Handel gave his first public concert in Salisbury in the house above the Gate.
Image by Christian Jones on Wikimedia under Creative Commons License.

Salisbury's landmarks, many of which date back more than eight centuries, are of great cultural significance to the city. This orientation walk will lead you to the most attractive city squares, relaxing gardens, theaters, picturesque historic houses and more.

Places Of Worship Tour of Salisbury

Salisbury welcomes people of many different faiths, and you can find Catholic, Anglican, Baptist, and other religious institutions represented here. Most places of worship in the city, however, belong to the Anglican Church, which has historically had a strong presence in Salisbury and the country as a whole. This walking tour will guide you to the most notable religious sites in central...  view more

On this self–guided tour you will explore Salisbury's historical and modern landmarks that are located outside of the city center. The Old Sarum settlement, stunning St. Francis Church, Stratford-Sub-Castle, St. Lawrence Church and interesting old houses on Strafford Road all shouldn't be missed!