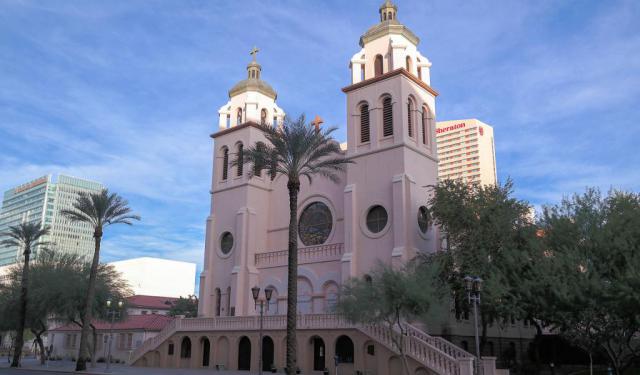 Image by Lyght on Wikimedia under Creative Commons License.

The downtown area of Phoenix is loaded with impressive constructions, each of them proof of the city's grandness. The present guide introduces both old and new, modest and big landmarks; each of them represents Phoenix's spirit and style. Take the present guided tour to admire the famous Phoenix venues that others see only through pictures.
How it works: Download the app "GPSmyCity: Walks in 1K+ Cities" from iTunes App Store or Google Play to your mobile phone or tablet. The app turns your mobile device into a personal tour guide and its built-in GPS navigation functions guide you from one tour stop to next. The app works offline, so no data plan is needed when traveling abroad.

Phoenix City Hall is a very famous and part of downtown, because this one of the tallest buildings in the area. It is also one of the newer additions to the skyline. The city has done a lot to promote this place. It rises twenty stories into the air, which is well over 360 feet. It was designed by Langdon Wilson, who has done other buildings in the area as well. Construction on the project began in 1992 and was completed in 1994.

It replaced the old buildings, which was called the Calvin Goode Municipal Building. It was also nicknamed the “Old City Hall. The current location was an $83 million addition to the city. You can find this building on Washington Street. The City Hall Tower sits on the north side of the side, whereas the old location is on the south side, near the Maricopa County Courthouse.

Image by sean horan on Wikimedia under Creative Commons License.
2

Luhrs Tower is a famous skyscraper located in downtown Phoenix, Arizona. It is located at the intersection of First Avenue and Jefferson Street. It is just south of Patriots Square Park.

It was built in 1929 by George Luhrs, who was a very famous businessman from the Phoenix area at the time. The tower rises a whopping 185 feet into the skyline of the downtown area. It contains 14 stories, with matching setbacks located in the 8th and 11th floors. The building was designed by Trost & Trost of El Paso, Texas. They also designed the famous O.T. Bassett Tower in their hometown.

The building, from an architectural standpoint, is a fine example of art deco. The building is famous as part of the overall backdrop from the 1960s movie Psycho by Alfred Hitchcock. Janet Leigh crossed the street here, in the movie, to make a deposit for her infamous movie boss.

Image by Camerafiend on Wikimedia under Creative Commons License.
3

3) US Airways Center (must see)

The U.S. Airways Center in Phoenix is a very famous tourist attraction. It is well known in the area as the premiere location for many of the best sporting events in town. It opened to the public in 1992. At that time, it was called the America West Arena. It is still the home of the Phoenix Suns and the Phoenix Mercury (part of the NBA and WNBA respectively.) The Arizona Rattlers of the Arena Football League also use this location to house their events.

It is located very near Chase Field, and is named after its current sponsor. The name of the complex was changed after America West merged with U.S. Airways in 2005.

The whole facility was given a facelift and renovation in 2003. It added air conditioning to its pavilion, so fans could keep cool while waiting for tickets. The changes were made to keep the venue competitive with other locations like the Jobing.com Arena.
Image by Schlendrian on Wikimedia under Creative Commons License.
4

The US Bank Center, the former Arizona highquarters of the Bank of America, is the second-highest skyscraper in the city of Phoenix. The building has thirty one floors and is 124 meters in height. The architecture chosen for the design of the building was modernism and it was developed in International Style. The structure was built using concrete - a popular material used in the construction of modern buildings. The color of the bank's facade is snow white, which makes it a very visible landmark.
Image by GTV6 on Wikimedia under Creative Commons License.
5

The San Carlos Hotel is a very famous place to stay in Phoenix. It is also a very popular tourist attraction in town. These grounds used to be the location for the first school in Phoenix, back in 1874. The school remained here until 1928, when preparation for the new hotel was started. It competed for years with the Westward Ho, which is across the street. You used to be able to see the likes of Mae West and Jack Dempsey here at one time or another. Marilyn Monroe also used to stay here.

The most famous factoid about his hotel is that it is reported to be haunted. For years it has been the site of multiple ghost sightings. The most common sighting is that of Leone Jensen, who visited the hotel in 1928. She committed suicide while there.

The San Carlos was added to the National Register of Historic Places in 1983. The City of Phoenix also added it as a historic location in 2003. The Travel Channel did a show about the place in 2004, which still airs on occasion.
Image by Cygnusloop99 on Wikimedia under Creative Commons License.
6

If you have ever had the chance to look at the skyline of Phoenix, Arizona, then you have, no doubt, noticed the Chase Tower. It is the tallest building in the state of Arizona. It was built in 1972, and stands a whopping 483 feet tall. At different points in time, it was known as the Valley Bank Center and the Bank One Center.

The location was built for the Valley National Bank, which ended up becoming part of Bank One in the early 1990s. There used to be an observation deck on the 39th floor, which is no longer there. The location was designed by Welton Becket and Associates from Los Angeles. The place was a prominent part of the downtown area until 1989, when the savings and loan crisis really hurt the real estate market in Phoenix. Chase Company did do a renovation of the property in 2003, to make room for more employees here. The tower was sold in 2007 for a record $166 million. To date, this is the most money every paid for a building in Phoenix, Arizona.
Image by Jimmybeverage on Wikimedia under Creative Commons License.
7

The Security Building is a wonderful old historic location in downtown Phoenix. It also represents another triumph for the efforts of the city to make use of their historic buildings. Constructed in 1928, it is located at the intersection of Central Avenue and Van Buren Street. The easiest way to find this location is by looking for the Chase Tower, which is Arizona’s tallest building. The two places are next to one another.

In 1928, the Security Building used to be the tallest structure in the state, so it was quite impressive for its day. The place was built by the Dwight B. Heard Investment Company. Mr. Heard was a very famous realtor and cattleman, as well as the president of the company. Originally, this was the premiere office building for produce growers and law firms in Phoenix.

If you go to visit, make sure you look for the glass oval which sits atop the brick exterior of the building. At one time, it used to shoot a beam of light into the sky that could be seen for 30 miles on a clear night in Phoenix.
Image by Steve Minor on Flickr under Creative Commons License.
8

Civic Space Park opened in 2009. The park is mostly famous for the "Her Secret Is Patience" public art sculpture, designed by artist Janet Echelman; the title is a quote from Ralph Waldo Emerson. The sculpture is multi-colored, with galvanized steel and polyester twine netting. The netting is designed to reflect the movements of the wind, while its shape mirrors Arizona's cumulus clouds. The netting is set 38 feet off the ground, and is 100 feet tall, consisting of three support poles. The sculpture is illuminated at night, with color inspired from the cereus cactus, an Arizona native. The park is also famous for neighboring a modern marvel of Phoenix' architecture, i.e. the Walter Cronkite School of Journalism of Arizona State University. This building was finished in 2008 and is a true state-of-the-art facility. You can note its alternating bands of brown, orange and red corrugated metal panels, forming different colored blocks covering much of the building.
Image by Michael | Ruiz on Flickr under Creative Commons License.