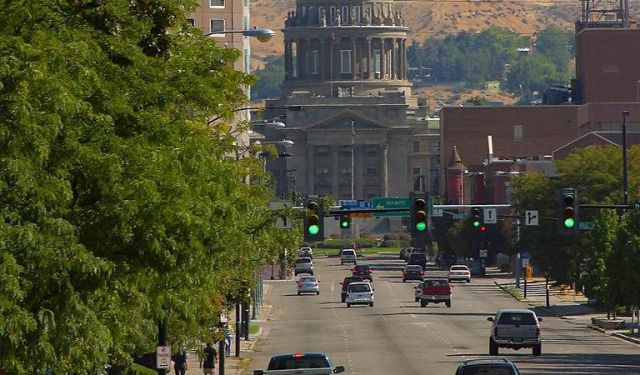 Boise, the largest city in Idaho with a population 202,832 has a lively downtown. In this tour you will not be an outside observer. You will participate in local culture through food, art, and drink. When not submerged in the joys of being a Boisean the tour takes you to some of Boise’s’ cultural learning centers to better understand the social, political, and environmental factors that created this beautiful city.
Image Courtesy of Wikimedia and Jon Sullivan.
This article is featured in the app "GPSmyCity: Walks in 1K+ Cities" on iTunes App Store and Google Play. You can download the app to your mobile device to read the article offline and create a self-guided walking tour to visit the attractions featured in this article. The app turns your mobile device into a personal tour guide and it works offline, so no data plan is needed when traveling abroad.

The morning social lubricant for downtown Boise would have to be coffee. Boise has a thriving coffee culture. There are many local coffee shops and roasters in Boise.

Rated as one of the most flavorful coffee houses by Boise Weekly, The Flying M Coffee House has been roasting their coffee since 1995. At the Flying M not only will your tongue be tickled but your smile will grow big when greeted by friendly baristas. Fresh baked pastries and unforgettable oatmeal will make your belly beg for seconds. The Flying M knows the best way to enjoy these delights are with wireless Internet and comfortable seating next to local art. The Flying M will get you excited to start your tour. Because now your wondering what are these wonderful Boiseans all about?

Discover how Boise became the chosen sight for Idaho’s capitol through photos and descriptive narration typed in large print. A person with an interest in historic restoration will enjoy the video detailing how the capitol became its modern self.

Tourists who enjoy supporting the local economy will appreciate these next facts.

Most of the superstructure is made of local sandstone taken from Table Rock (near Boise). There’s a lighted cross on top of Table Rock that a person can see from down town at night.

Local convicts from the old Idaho Penitentiary were responsible for transporting the 10-ton sandstone blocks from the quarry.

Idaho's Capitol Building is the only one in the United States heated by geothermal water. The hot water is tapped and pumped from a source 3,000 feet underground.

The Steunenberg statue across the street from the capitol memorializes Governor Frank Steunenberg, Idaho’s governor 1897-1900, who was assassinated in 1905. People who are interested in union history and have read, Big Trouble: A Murder in a Small Western Town Sets Off a Struggle for the Soul of America by J. Anthony Lukas, will find this statue an important historical stop.

For those not familiar with Steueneberg here’s a short paragraph from Big Trouble that describes why this statue carries so much meaning to many socialists, anarchists, and Wild West historians:

"After Idaho’s former governor is blown up by a bomb at his garden gate at Christmastime 1905, America’s most celebrated detective, Pinkerton James McParland, takes over the investigation. His daringly executed plan to kidnap the radical union leader “Big Bill” Haywood from Colorado to stand trial in Idaho sets the stage for a memorable courtroom confrontation between the flamboyant prosecutor, progressive senator William Borah, and the young defender of the dispossessed, Clarence Darrow."

Like Steuenberg, Lukas did not die a natural peaceful death. During the final revision of Big Trouble he committed suicide by hanging himself with a bathrobe sash.
Image Courtesy of Faustus37.
4

Humanmade goodness can be found at The Bricolage located next to Superb Sushi. The Bricoloage specicializes in creative goodness. Chelsea Snowmade and Juliana Inkpony, the owners, are not afraid to put out positive messages through craft and art. One of their best selling products are a set of prayer flags screenprinted with the message “you are so very loveable.”

A traveler will also experience this positive message in the Bricolage revolving art gallery. Ms. Snowmade gives an example of how humanmade goodness and art can go hand in hand at the gallery.

“Capture the Magic :: a thrift store art show which involves a massive collection of privately owned pieces of art that have been purchased at thrift stores. One of the stipulations for submitting a piece to the show was that it needed to be "handmade" which is another way to say "humanmade." The goodness part comes in upon experiencing that unnameable joy that fills your body upon seeing a black velvet painting. You can't tell me that you don't feel it.
Image Courtesy of Davburns1970.
5

“Let culture be your guide, not science” says Michael Pollan when it comes to food. Traditional food culture has found it’s way back into downtown Boise. You are not going to find genetically engineered food at the Red Feather Lounge and Bittercreek Ale House. What you will find is Treasure Valley 100% Grass -Fed & Finished Burger served along with Saloon Sauce, Local Greenfleaf, Onion, and a Gaston’s Challah Bun or House Smoked Idaho Trout| Roasted Garlic, Red Onion, Capers, Horseradish Fromage Blanc, House Made Crackers. Yum Yum Yum. At the bottom of the Red Feather and Bitter Creek Ale House menu you will find a list of local farmers that supply the meat and veggies to the restaurant. A further reminder that food cultures are embedded in the fabric of a community.
6

Idaho has a large population of Basque. Their culture is kept alive in a series of buildings on the Basque Block. The Basque have a unique style of dance and music, which can be learned about at the Basque museum. You can't come to Boise and not try Basque cuisine. Bar Gernika has been a fixture on the Basque Block for almost 20 years and serves authentic Basque foods, wine and desserts. I recommend the tuna melt! If you now have fallen in love with Basque cuisine, walk over to the The Basque Market. There you can stuff your bags full of Arroz Valenciano, Matlz Paella Rice, and Quijote Superior.
7

Julia Davis Park is a 89.4-acre regional park and the hub of Boise cultural life. The foundation of the city starts here with it’s diverse museums and zoo. The park is home to the Boise Art Museum, Idaho State Historical Museum, Idaho Black History Museum and Zoo Boise.

The park hosts various festivals and other cultural events. The pavilions located throughout the park provide great places for picnic areas, concert centers, and gathering spaces. A little overlooked fact, the park also provides a great place to observe ducks and geese up close. The park boast 4 drinking fountains and public bathrooms open from mid April through mid October.
Image Courtesy of Karakorum90.
8

8) The Cabin, A Literary Center for Idaho

The Cabin incorporated as a nonprofit organization in 1995 as The Log Cabin Literary Center. Its mission is to inspire and celebrate a love of reading, writing and discourse throughout Idaho and the region. The Cabin brings in out of town authors, hosts community writing workshops, sells the work of local presses and authors. You will find a large selection of Limberlost Press books for sale. A local book publisher who specializes in creating books letterpress printed on archival-quality paper, and sewn by hand into limited editions. The press publishes local authors like Gino Skye and nationally known authors such as Sherman Alexie and Allen Ginsberg.
9

Enjoy a stretch of the Boise Greenbelt between The Cabin and Julia Davis Park. The pathway links over 850 acres of parks and natural areas along the Boise River, including a 25 mile long bicycle and pedestrian path, paved except for a 1.5 mile section from Barber Park downstream. Year-round visitors can see songbirds, ducks, Canada geese, great blue heron and bald eagles in the winter. Visitors can also observe beaver, muskrats, deer and squirrels. The greenbelt gives Boiseans easy access to the Boise River. Anglers, swimmers, rollerbladers and tubers call the greenbelt the Boise River highway. There are plenty of trash cans, drinking fountains, and bathrooms located along the greenbelt.

The Fort Street Historic District roughly comprises 47 blocks, situated primarily within the 1867 plat of Boise City original townsite, and forms part of a larger area known locally as Boise's North End Preservation District. Upon its nomination, in 1982, for the National Register of Historic Places, the Fort Street district contained 318 buildings.

Over the years, this neighborhood has...  view more

For thousands of years the tree lined Boise River valley was home to the Shoshone people. They would meet here to trade with other tribes. The valley was congenial and the river full of salmon. It was a holy place for indigenous people.