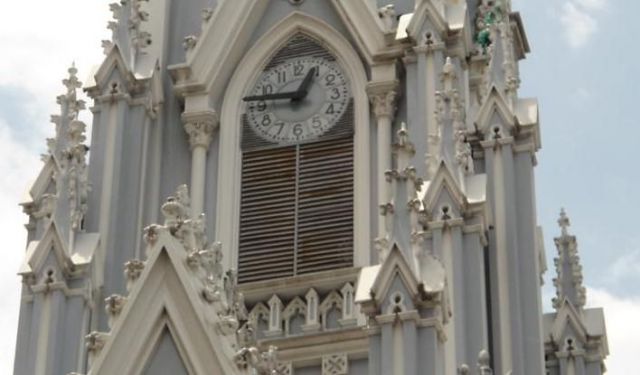 Cali churches and parks guide, which takes about an hour and a half, takes in seven churches, two parks and a museum, all to be found in the historic center of Cali and finishing in Parque San Antonio where one feels as if one has left the city and entered the countryside.
This article is featured in the app "GPSmyCity: Walks in 1K+ Cities" on iTunes App Store and Google Play. You can download the app to your mobile device to read the article offline and create a self-guided walking tour to visit the attractions featured in this article. The app turns your mobile device into a personal tour guide and it works offline, so no data plan is needed when traveling abroad.

This church, which originally marked the northern boundary of Cali, was declared the second most important church in Cali in 1849. The Santa Librada college had already been set up here in 1823. The building has an orange and white interior while the green stained glass window is definitely worth a look, as are the smaller very simple stained glass windows high up along both sides of the length of this church.
2

Originally constructed in the 17th Century this beautiful, compact, tall grey and white building was only built in 1942 after the original was destroyed in an earthquake in 1787. Its style is mini Gothic, being inspired by Ulm Cathedral in Germany. The altar deserves special attention as it is made of pure white marble. The stained glass windows portray the apostles. The church is dedicated to Nuestra Señora de la Soledad (Lady of the Solitary people) and to the Señor of the Caña (Lord of the Sugar Cane).
3

Considered the most important park in Cali this pleasant plaza, which has an abundance of palm trees and grass, was, for a hundred years, until 1913, known as the Plaza de La Constitucion. It was re-named in honor of the local politician and soldier Joaquín de Caycedo y Cuero and there is a bronze statue of him in the center of the park. Before this, until 1813, this place was known as the Plaza Mayor, and the name changed on the same the day that Cali officials swore loyalty to the constitutional monarchy of Spain. The main Cali market was located here until 1897. The plaza underwent restoration in 2005.
4

Hidden away behind palm trees in a corner of Plaza Caycedo, Catedral San Pedro is a small, compact cathedral that barely takes up a quarter of a block. It has a white interior as well as an exterior of the same color. Noteworthy is the statue of the man on a horse with his boot over his opponent, who may have been Indian from his dark color, while a shield at the front of the work gave the date of 1559. There are also 14 beautiful stained glass pictures depicting scenes from the bible high up along the length on both sides of the church; also on the left hand side is another altar dedicated to the Virgin Mary.
5

This and the next site, the Capilla de La Inmaculada, appear to be one building looking from the outside though on the inside it is clear that they are two separate entities. As you approach the building your first view is of the steeple of this church, which in contrast to the rest of this enormous building, constructed between the seventeenth and nineteenth centuries, is not made from red brick. The church has a neo-classical style with a barroque altar that contains 12 statues of Franciscan saints.
6

The steeple of the Capilla, with its old bells, is made of the same red brick as the rest of this large and splendid building which the Capilla shares with the Iglesia de San Francisco. The interior is beautifully painted in white and blue while at the back of the church there is a stunning and very simple stained glass window. The exterior is dominated by the Mudejar tower, a style brought over from Moorish Andalucia in Spain, of which this is considered the best American example.
7

This is a small and very old looking church that was built in 1678 and is considered a very fine example of churches built at that time, though subsequent restorations have altered the building. The most recent restoration occurred after the roof blew off in an explosion in 1955. There are three main altars with the central one being made of red wood and decorated with gold and having the image of the Virgin of Merced, who is the patron saint of Cali, at its center. This altar is draped with a Rosario donated by Pope John Paul II on his visit in 1986.
8

At the back of the park surrounding the Iglesia de La Meced is the Museo Arqueologico de La Merced. The park surrounding the church has a beautiful and very ancient looking tree as well as ruins from the church. The Museum is nowadays a separate entity from the church, run by the Colombian Banco Popular. On display in the Museum are ceramics from the pre-hispanic era from the various indigenous tribes that then inhabited the south west of Colombia. It is open from 9AM to 1PM and 2PM to 6PM from Monday to Saturday.
9

This enormous and popular park, also known as the Parque del Acueducto, is set on a hill with spectacular views, including of the many stunning and ancient trees which it contains. The park is a welcome green respite from the harshness of the city, and being here gives one a feeling of being in the countryside while actually remaining in the heart of the city. Cali's planetarium is also to be found here, as is the Iglesia de San Antonio and an open air theater known as Teatro al Aire Libre Los Cristales de Cali, where live performances sometimes take place.
10

Due to the expansion of Cali the workers who lived in this part of the city could not attend any of the faraway churches so in 1742 plans began to build this church which was eventually started in 1746 and finished the following year. It sits on a hill overlooking the splendid Parque de San Antonio. The Capillary was restored between 1786 and 1809, and the whole church was restored in 1944 to mark 200 years of it's existence. It has a barroque style.