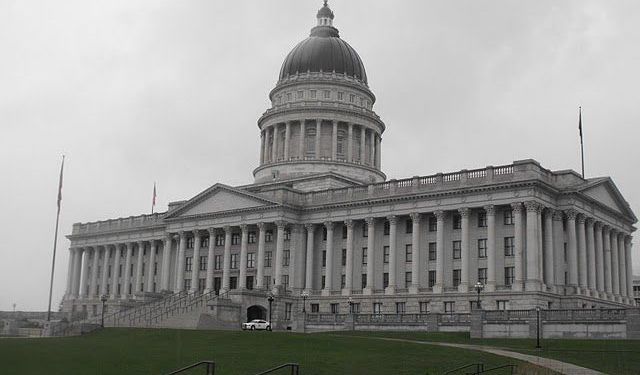 Perhaps no city in America sees religion and politics mingled in such near proximity as Salt Lake City. Its place as both the state capitol of Utah and the center of the Mormon Church make it a unique city in that sense, and this tour will explore a group of site braiding these themes together from separate threads.
This article is featured in the app "GPSmyCity: Walks in 1K+ Cities" on iTunes App Store and Google Play. You can download the app to your mobile device to read the article offline and create a self-guided walking tour to visit the attractions featured in this article. The app turns your mobile device into a personal tour guide and it works offline, so no data plan is needed when traveling abroad.

This beautiful mansion sits along East South Temple Street – just a few blocks east of Temple Square. Built in 1902 by the successful silver-mining tycoon Thomas Kearns, the mansion hosted many high-society events of the era, as well as many famous dignitaries including Teddy Roosevelt. The mansion was donated to the state in 1937 and has served as the official Utah Governor’s mansion off and on throughout the years since. Constructed from limestone, the building featured some of the most ornate woodwork and plasterwork of the time until a fire destroyed much of the interior in 1993. Much of the original craftsmanship was painstakingly reconstructed in the following months, and the mansion was renovated. Free public tours are available by volunteers of the Utah Heritage Foundation.
2

One of the three oldest religious structures in Salt Lake City is, surprisingly, not Mormon. The First Presbyterian Church was built in 1903 and restored for its centennial celebration in 2003. This Gothic Revival cathedral was designed by architect Walter Ware, modeled after the Carlisle Cathedral in England, and constructed from red sandstone quarried from nearby Red Butte Canyon. Three massive, ornate stained-glass windows grace the cathedral – one depicting the “Empty Tomb”, another “Christ in the Manger”, and the third “Christ in Gethsemane”. The 2000-pipe Bennett organ was originally dedicated in 1911 and electrified in 1926. Visitors are welcome to attend services at 9 and 11 am on Sundays, or view the church during office hours – Monday through Thursday, from 9 am to 4 pm.
3

3) Cathedral of the Madeleine

This Romanesque Catholic cathedral with Gothic interior sits just a few blocks east from the center of the Mormon faith in downtown Salt Lake City. Built from Utah sandstone, construction began in 1900 and was completed in 1909, at a cost of $344,000 – dedicated that year by Cardinal James Gibbons of Baltimore. Catholics are the largest minority faith in the city, and this ornate cathedral serves as its centerpiece. Listed on the National Registry of Historic Places, the cathedral was renovated and restored between 1991 and 1993, at a cost of $9.7 million dollars. The vibrantly colored murals and stained glass windows, marble floors, gorgeous onyx altar, and massive 4000-pipe organ are just a few of the impressive reasons to stop by for a visit.
Image by Adrian Comollo under Creative Commons License.
4

This building sits just south of the main entrance to Memory Grove Park, and is on the National Registry of Historic places. The hall was constructed in 1900 by the Volunteer Firemen’s Association and named after its leader, George M. Ottinger. Originally used as a social gathering place for fire fighters of the era, the hall is today used for community events and host of the YouthCity program – which provides fun activities like camps, sports leagues, and classes in art and dance for kids when school is not in session. The hall was renovated in 2006, spearheaded by the Rotary Club of Salt Lake City.
Image by Bobshaw25 under Creative Commons License.
5

Originally designated as a city park in 1902, this green space occupies a peaceful spot in City Creek Canyon – tucked away in a nearly hidden pocket just down the hill from the Utah State Capitol building. Gardens, lawns, water features, and beautiful monuments provide a perfect setting for reflection – as the park began a theme honoring military veterans starting in the 1920’s. Trails throughout the park are available for walking, running, or biking – including a zigzag of trails leading up the wooded hillside westward to the capitol itself. Dogs are also welcome – with the park even containing a designated off-leash area.
6

Currently sitting directly across from the Utah State Capitol building, the Greek revival-style Council Hall building was originally constructed in 1866 on East 1st Street, and then dismantled in 1961 to be moved to its new location. Serving as City Hall between 1866 and 1894, the building was the location of several volatile political events – most of which stemmed from the power struggle between the federal and state governments. Now peacefully retired from the conflict and strife of its past in politics, Council Hall now spends its golden years serving as the Utah Office of Tourism, the Utah Film Commission, and the Zion Natural History Association bookstore.
7

Perched on a hilltop above downtown, this majestic state capital building was designed by Utah architect Richard K.A. Kletting and constructed in 1916. A classically styled building inspired by Greek and Corinthian design, the Utah State Capitol is 404 feet long and 285 feet high at the top of the dome, and made of quartz monzonite quarried from nearby Little Cottonwood Canyon. The 40-acre state capitol grounds also include a number of monuments honoring Vietnam veterans, the Mormon Battalion, and police, among others. Added to the National Register of Historic places in 1978, the building underwent a renovation project beginning in 2004 to add a base isolation system – allowing the building’s weight to safely transfer in the event of an earthquake.
8

This museum – located next to the Utah State Capitol – is run by the International Society Daughters of Utah Pioneers. Said to house the “world’s largest collection of artifacts on one particular subject”, the museum covers Utah Pioneer history spanning from Nauvoo, Illinois to the Mormon migration to Utah. Four floors, plus a carriage house, offer 38 themed rooms of museum artifacts and exhibits – including the “Medical Room”, “Brigham Young’s Wagon”, and the “Clothing Room”. As an organization, the Daughters of Utah Pioneers was founded in 1901 to preserve the region’s history. Admission is free, and the museum is open Monday through Saturday, 9 am to 5 pm, as well as Sundays during the summer from 1 to 5 pm.

To end the tour, simply walk three blocks south down Main Street to the downtown Temple Square area – where a number of public transportation options are available to destinations throughout the city.