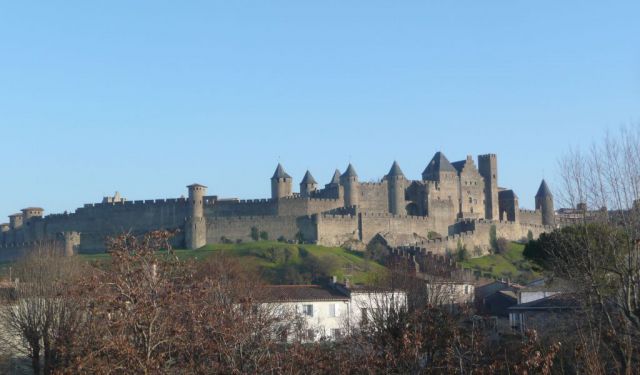 La Cite de Carcassonne sits above and beside the River Aude on a promontory of rock occupied since before the arrival of the Romans. Built in places on visible foundations dating from the Lower Empire (300/400 AD), the ramparts and fortifications visible today date from the 11th to 14th centuries. Extending over 40 hectares with walls of 3 kilometres it is packed with history, restaurants and countless visitors. Not to be missed!
This article is featured in the app "GPSmyCity: Walks in 1K+ Cities" on iTunes App Store and Google Play. You can download the app to your mobile device to read the article offline and create a self-guided walking tour to visit the attractions featured in this article. The app turns your mobile device into a personal tour guide and it works offline, so no data plan is needed when traveling abroad.

This the greatest and best known gateway into the medieval Cite, if only because it is the first reached from the car parks and where the bus-borne tourists are deposited. It is perhaps the most photographed monument in France after the Eiffel Tower. Two great barbacanes jut out from the great wall, approached through an outer defensive gateway or chatelet in which can be seen the positions of the portcullises, the great sliding iron gates through which attackers could be disposed of from above and from the sides. The two barbacanes themselves form part of the second, outer wall which was built after the suppression of the Cathar rebellion, starting in the 1230s. Whilst the threat to the power of the French throne from the Cathar heresy had been eliminated, another threat from the Kings of Aragon claiming the Roussillon as theirs continued until the treaty of the Pyrenees 1n 1659, and it was against this threat that the outer wall was built by the French Crown. The towers were more than simply military constructions. They contain upper chambers with highly decorative stonework and fireplaces. As with the other towers and battlements, much of what you see today is the result of major restoration in the nineteenth century. By that time the Cite had fallen into ruin, having been used as a quarry for the building of the lower town.
2

Turn right and go into the space between the outer and inner walls. These are the Lices, and were never a moat as is often supposed. The inner wall dates from the early 11th century and mostly follows the course and was built on the much earlier Gallo-Roman wall dating the the Lower Empire, 300-400 AD. The Cite was fortified by the Trencavel family, the Counts of Carcassonne. Traces of the earliest construction can be seen in the brick and stonework of the Tour du Moulin and its neighbours the Tour du Connetable and de Marquiere on the northern ramparts, known as the Visigoth towers. The later 13th century outer wall is defended by bastions with open insides at the back, designed so that any successful attack on the outer wall would expose the attackers to arrow fire from those holding the inner wall.
3

This doorway is set into the ancient Gallo-Roman wall visible to the right and once gave access to and from the Bourg St Vincent below. Looking vulnerable to attack today, it was originally defended by a fortified gatehouse on the outside and by crossfire from the barbacane towers on either side, the Tours Marquiere and Sampson. It is of typical Romanesque construction with a semicircular arch. The crenelations above, and indeed all around the Cite walls, are nearly all restorations using locally quarried stone known as 'gres'. The slates for the roofs on the turrets were quarried in the Montange Noir, visible to the North.
4

This is the inner defensive sanctuary of the Cite, worth an entire tour in its own right. Begun by the Trencavel family in the 12th century it was completed in the 13th and 14th after coming into the hands of the Crown of France after the suppression of the Cathars. It houses an excellent museum. Seen from the exterior it has a semi-circular bastion as a first line of defense, followed by a bridge over the hollowed ditch. This bridge once had a drawbridge as a second line of defense. Attackers reaching this far were subject to fire from the Chateau itself. Defended further by a narrow entrance with twin towers either side, a portcullis within and a killing zone, and wooden galleries above for downward fire, this is the epitome of 13th century defensive architecture. The Chateau was never taken by force. A great rectangular watchtower rises on the southern end giving a spectacular panoramic view over many miles.
5

It is open to question in what state La Cite would be today were it not for the efforts of one man, Jean-Pierre Cros-Mayrevielle. He lived in the 'faubourg' outside the walls. France and indeed the world owes this man an enormous debt. A lawyer and journalist, he became a town councilor and was instrumental in having reversed the decree allowing the wholesale pillaging of the walls of the Cite for the stone, which he described as an act of 'State Vandalism'. Having discovered the grave of Bishop Guillaume Radulphe in the south chapel of the Basilica of St Nazaire he successfully campaigned to have the church placed under the protection of the Monuments de France, which ultimately led to the appointment of Villiers le Duc as the overseeing architect for the restoration of the church and then the entire Cite.

It should also be said that a debt is owed to the French Army and various Ministers of War, notably the Marquis de Hautpoul born in the Aude, who reclassified the site as a military emplacement in 1850. Thus was maintained a military presence in the Cite from the 13th century until 1918. The military budget and the presence of a garrison made more than a modest contribution to the survival of the Cite. Note the bronze bas-relief around the base of this monument.

Leaving the Basilica pass through the Porte St Nazaire. This gateway in the inner wall was in virtually total ruin when Viollet le Duc, throwing budgetary caution to the wind, undertook a complete rebuilding in the 1860s. You find yourself in the Lices Hautes on the southern side of the Cite, much wider than the Lices Basses in the earlier part of the tour. This space was also built up with houses over the centuries and had to be cleared. This is a splendid place to admire the full scale of this medieval fortress, with great barbacanes stretching away to east and west. Turn right (westwards) and stroll between the battlements as they narrow along the western escarpment overlooking the River Aude and the Bastide beyond. They become so narrow that eventually you have to pass under the Tour de l'Eveque which sits astride the two walls. Look up and see the ogive ceiling. Passing the Tour de l'Inquisition you arrive at the Porte de l'Aude
7

The Basilica of St Nazaire represents the high flowering of southern French Romanesque architecture. Do not be put off by its rather forbidding exterior, so common in French ecclesiastical architecture, go inside!

The stones for its construction were blessed by Pope Urban II in the summer of 1096 and the church was completed in the first half of 12th century with a typical barrel vaulted nave and round pillars. In 1269 the transept and apse were added in the Gothic style, the first such in southern France.Included was the chapel and tomb of Bishop Radulph, who died in 1266. The church contains magnificent examples of 13th and 14th century stained glass. The building was much restored by Villiers le Duc as his first project for the Monuments de France and before being appointed to save and resurrect the Cite. As an example, the great Romanesque doorway is only genuine as regards the two inner false columns either side of the doors. The remainder were re-carved following the much worn patterns of the originals now in the stone museum in the Chateau Comtal.

This is perhaps the most interesting gate from a defensive point of view. Named after the river below which it overlooks, the defences were built in the 13th century. Several false entrances leading nowhere but into killing traps for the attackers were designed to confuse the enemy. A fortified corridor was built in a defensive zigzag virtually straight down the hill to a great bastion finally demolished in the 1860s to make way for the St Gimer church. This bastion dominated the plain between the citadel and the river. Not surpisinglythe gate has been frequently used as a film set.
9

This pretty church is one of only three designed and built by Viollet le Duc. He originally wanted to rebuild the great Bastion de l'Aude here but was overruled. The entrance to the fortified passage leading up to the Porte de l'Aude is immediately to the east leading precipitously upwards to the citadel. The church is relatively modest, simple even, perhaps reflecting constraints on the budget as a consequence of the expense relating to all the other restorations. But it also reflects the style of a man who wanted always to be an architect of the new rather than a restorer of the old - and who got so little opportunity to be so.
10

Houses once clustered all the way up to the walls of the Cite rendering their defense more difficult and the authorities had centuries of problems removing them. Indeed this was one of the reasons for the founding of the Bastide, or Lower Town. across the river.

At the end of the street where it meets Rue Trivalle stand the remains of the Royal Manufacture of Cloth, opened in 1696 as a private venture. It was an enormous undertaking and formed a community within a community with the workers living on site. The mill was powered by two water-wheels driven from the canal alongside which is fed from the weir a kilometre upstream (a visit to which makes pleasant walk along the river). The building now forms part of the town's administrative centre having been largely demolished in the 1950s when it finally ceased production of fertilizer made from rags, and a horn based product, bouillie bordelaise, which was instrumental in the revival of the vine industry after the great phylloxera pandemic of the 1880s. It still houses a magnificent staircase. The reference to its royal association on the facade has been defaced as an act of anti-monarchic fervour.

This marvel of the middle ages is known to have stood since the early 1300s. It replaces the earlier feudal and wooden Roman bridges, traces of which are to be found in the river bed. Medieval engineering at its most durable, thirteen stone arches span the river Aude linking the two communities of La Cite and La Bastide. There was an arch with a gate originally erected in the centre, where the extended piers can be seen, as the two communities were often in conflict. It was fortified at either end. There are thirteen arches of varying width, wider on the eastern side where the river flow was once at its greatest. The bridge is essentially as it was built although the original parapets are missing In the great flooding of October 1891 the river rose no less than 9 metres. This is a favourite spot for photographing the Cite above. Note also the early C15th chapel at the western end. Named Notre Dame de la Sante or (locally) Notre Dame du Bout du Pont, it is the last relic of the first hospital in Carcassonne. On the side can be seen marked the level of the flood. Go inside if it is open as you pass, a cool haven of peace, and then go another fifty metres along the bank to fully appreciate and photograph the bridge.