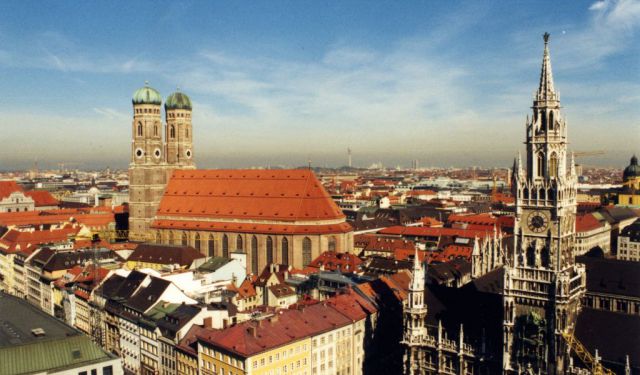 Munich is a large, sprawling city with beautiful sights to see around every corner. The city is too spread out to see in just one tour, so this tour will walk you through the northern part of the famous downtown area, pointing out and describing the most astonishing attractions.
This article is featured in the app "GPSmyCity: Walks in 1K+ Cities" on iTunes App Store and Google Play. You can download the app to your mobile device to read the article offline and create a self-guided walking tour to visit the attractions featured in this article. The app turns your mobile device into a personal tour guide and it works offline, so no data plan is needed when traveling abroad.

Create Your Own Self-Guided Walks in Munich
Guide Name: Downtown-Northern District
Guide Location: Germany » Munich
Guide Type: Self-guided Walking Tour (Article (A))
# of Attractions: 8
Tour Duration: 2.0 Hour(s)
Travel Distance: 2.4 Km or 1.5 Miles
Author: Stefan Siewert
Author Bio: Dana Newman has a bachelor’s degree from the College of Journalism and Communications at the University of Florida. After receiving her degree she followed her dreams to Europe to live an adventure and collect experiences, which she now writes candidly about from her present home in Munich, Germany. She considers it an honor to be able to live the life she’s imagined.
Sight(s) Featured in This Guide:
1

The Gothic style Neues Rathaus in Marienplatz square has served as Munich’s town hall since 1874. The central, 260-foot tower is open to visitors; you can take an elevator up to the top for a splendid aerial view of the city. The Rathaus-Glockenspiel chimes every hour but only performs at 11am, 12pm and 5pm. The Glockenspiel characters represent different parts of Munich’s history. In the lower section, for example, the figures do a little dance. This dance, unique to Munich, is called the “Schäfflertanz.” It has been around since the early 1500’s but is, interestingly, only performed by the people once every seven years; nobody knows why.
Image by Lukas Gerhold under Creative Commons License.
2

2) Frauenkirche (Cathedral of Our Lady)

The tall, beautiful church looming before you is one of Munich’s most famous landmarks and considered a symbol of the city. Construction of the red, Gothic brick church began in 1468 on the site of a previous, smaller church, which the city had outgrown. The towers are both about 323 feet in height, with the north tower actually being a smidge higher than the south one. Originally, both towers were supposed to have pointed spiral tops, which, some people say, would match better with the rest of the building style, but due to a lack of funds the green domes seen today were used instead. Unfortunately, much of the church’s interior was destroyed by bombs in WWII, but has since been rebuilt from the rubble. Upon entering the church it may appear, at first glance, that there are very few windows. This is because most of them are hiding behind the large pillars that run from floor to ceiling. Legend has it that the builder made a deal with the devil not to have any windows in the church in exchange for his help building it. The builder then tricked the devil by hiding all the windows behind the pillars. When the devil found out that he had been duped, he stamped his footprint into the tile. Be sure to look for the “Teufelsschritt,“ or “devil’s step” in the entrance hall.
Image by sanfamedia.com under Creative Commons License.
3

Feldherrnhalle was built to honor the Bavarian army that fought in the Franco-Prussian War. Construction of the monument began in 1841 on the site of where one of Munich’s main city gates used to stand, and was modeled after the Loggia dei Lanzi in Florence. The Feldherrnhalle gained notoriety when a pre-WWII struggle broke out in its courtyard on November 9th, 1923. Hitler supporters had led an illegal march down Ludwigstrasse toward Feldnerrnhalle, and refused to stop when ordered to do so by the Bavarian State police. The police felt threatened and open fired on the dissenters. Four policemen and 16 marchers were killed. This Nazi attempt to take over the Bavarian government forced Hitler to do a short bit of jail time and is commonly referred to as the Beer Hall Putsch since the march had begun at the Bürgerbräu Keller, one of the largest beer halls in Munich.
Image by Holger Weinandt under Creative Commons License.
4

The Hofgarten is a popular, green garden right smack-dab in the center of Munich. The garden took four years to finish once construction began in 1613. The serene centerpiece of the garden is a pavilion that was built for the goddess Diana by Heinrich Schön the elder in 1615. Eight arches adorn the pavilion, each one with a path leading out into the park. The bronze statue adorning the pavilion’s roof represents salt, water, grain, and game, the riches of the Bavarian land. In the northeast corner of the park is a granite memorial dedicated to the University of Munich students and the philosophy professor who were members of the non-violent White Rose group that died for campaigning against Hitler’s regime.
Image by Hoheit under Creative Commons License.
5

The Residenz was the royal palace of the Bavarian Monarch. The palace you see before you today is sprawling and great, in fact it is the largest city palace in all of Germany. But, it has not always been this way. This amazingly large palace started out as a robust castle surrounded by moats in 1385. Throughout the ages, up until 1918, the Wittelsbach dynasty lived here, adding to and expanding the palace and gardens more and more into the city. The palace is divided into three main sections, the “Königsbau” (King’s Building), near Max-Joseph-Platz, the “Alte Residenz” (Old Residence), near Residenzstrasse, and the “Festsaalbau” (Ballroom Building), near the Hofgarten. The palace contains ten courtyards and 130 extraordinary rooms, which are a part of the museum that is open to the public. You can already see from the outside that the building is quite impressive architecturally, but take a trip inside and get into the minds of the Wittelsbach dynasty. See not only the extremely lavish interior decoration of the palace, but also their many stunning collections of art that adorn the walls and hallways at every step.
Image by Gryffindor under Creative Commons License.
6

The National Theater in Munich has had quiet an eventful life with not one, not two, but three “grand openings.” The first National Theater was designed by Karl von Fischer and was modeled after the Odéon in Paris. It opened in 1818 with Die Weihe by Ferdinand Fränzl. Just 5 years later a fire destroyed the National Theater, but reconstruction commenced immediately and the second opening occurred two years after the fire in 1825. The second theater, designed by Leo von Klenze remained until WWII when, like many things in Munich, it was destroyed by bombs. In 1963 the third opening of the National Theater that you see before you took place. Designed by Gerhard Moritz Graubner, this theater is based on the original design that Karl von Fischer created in 1818.
Image by Andrew Bossi under Creative Commons License.
7

The Alter Hof (Old Court) was for many years the royal residence of the Wittelsbach dynasty and housed the royal regalia in its St. Lorenz Chapel. After some dangerous uprisings, however, the Wittelsbach family and their royal regalia moved into the Residenz and since the 15th century this castle has been home to several governmental departments, but no royal families. The castle is split into 5 sections which are located in this general vicinity. The Gothic style Burgstock and Zwingerstock sections have been preserved while the Lorenzistock, Pfisterstock and Brunnenstock were turned into luxury apartments and offices in 2005 and 2006.
Image by Robert Theml under Creative Commons License.
8

Hofbräuhaus am Platzl directly translates to “court-brewery at Platzl.” The word “court” comes from the fact that the brewery was once owned by the royal family, but is now owned by the state. The Hofbräuhaus building was built in 1607 by the Bavarian Duke Maximilian I, but was not open to the general public until 221 years later in 1828. The building has been remodeled twice since then, once in 1867 and then again after WWII when everything except the ground floor was ruined from bombs. While the building was used for some years by Hitler as a site for his publicity and propaganda events, today the Hofbräuhaus am Platzl has a lively atmosphere with traditional Bavarian music flooding through the great hall. There is only one size of Hofbräu beer available, called a maß, which is one liter. It’s a lot of beer, but certainly provides you with a great photo opportunity! The menu is full of hearty traditional Bavarian food such as roast pork, pork knuckle and sausages, but offers salads and lighter appetizers as well. For dessert I must recommend the Hofbräuhaus Kaiserschmarrn. It’s delicious, and unlike anything I ever had before.
Image by Gryffindor under Creative Commons License.