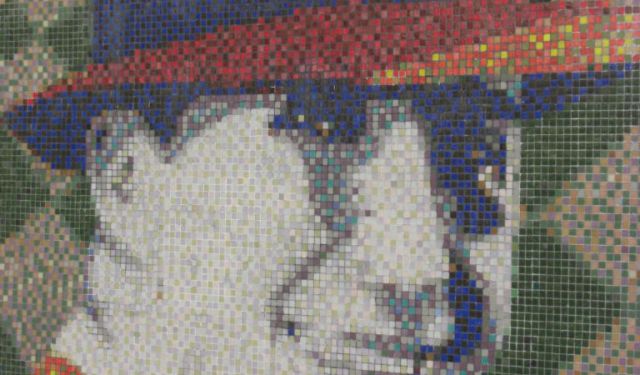 Carlos Gardel is the undisputed icon of tango in Buenos Aires - the city which gave the dance and its music to the world. This tour will take you into the heart of the neighbourhood most closely associated with the singer, to his former homes, to a cafe where he sang and to the impressive tomb which is his final resting place.
This article is featured in the app "GPSmyCity: Walks in 1K+ Cities" on iTunes App Store and Google Play. You can download the app to your mobile device to read the article offline and create a self-guided walking tour to visit the attractions featured in this article. The app turns your mobile device into a personal tour guide and it works offline, so no data plan is needed when traveling abroad.

Create Your Own Self-Guided Walks in Buenos Aires
Guide Name: Gardel - Tango Legend
Guide Location: Argentina » Buenos Aires
Guide Type: Self-guided Walking Tour (Article (A))
# of Attractions: 8
Tour Duration: 4.0 Hour(s)
Travel Distance: 9.2 Km or 5.7 Miles
Author: Paul Costello
Author Bio: My name is Paul Costello, I am 33 years old and I have lived in the city of Buenos Aires for more than a year. I moved here from the north of England after falling in love with the city’s architecture, vibrant nightlife and passionate people. I am a journalist by trade and have worked for the BBC as well as newspapers in the UK.
Sight(s) Featured in This Guide:
1

Carlos Gardel only graced Buenos Aires’ most famous café with his voice once. He sang here with his guitarists for Italian writer Luigi Pirandello in 1927. The singer did however frequently visit the establishment after recording radio programmes in the city centre or singing at other bars and cafes. The owners have been keen to recognise his connection with the café and a model of the singer has been positioned next to those of other famous former patrons, poet Alfonsina Storni and writer Jorge Luis Borges. A number of plaques and illustrations of the singer are also littered throughout the café, which has been serving a mix of the city‘s artists, musicians, politicians and workers since it opened in 1858. The café has now become so popular as a tourist attraction that tourists can often be seen queuing on Avenida de Mayo to get in and sample the historic atmosphere.
Image by Rcidte under Creative Commons License.
2

The singer’s birthplace is hotly disputed between France and Uruguay. However, it is know that he arrived in Buenos Aires with his mother Marie Gardes when he was about aged two and that their first home was here in Uruguay street. They lived in a first floor apartment and his mother supported them by working as a laundry woman a few blocks away in Montevideo street. A plaque erected by the city government at the site, which is now a car park, states Gardel lived at 160 Uruguay from 1893 until 1900. However, some of his biographers actually believe he lived at 162 Uruguay. Another plaque can be found at 1557 Avenida Corrientes where he is believed to have lived for a period from 1903.
3

Abasto, more than any other neighbourhood in Buenos Aires, can stake the claim to being the barrio of Carlos Gardel. It was in the cafes of this hustling market area that he first began to wow crowds with his

voice. Indeed, one of his many nicknames would later be El Morocho del Abasto - the dark-haired guy from Abasto. He bought this house for his mother in 1927, ten years after his tango-cancion Mi Noche Triste had shot him to fame. They lived there together, while he was not touring or filming movies, until 1933. The house, which was transformed into a museum in 2003, retains some original rooms from Gardel’s time, including the kitchen, ironing room and bathroom. It is littered with instruments, sheet music, magazines, newspapers and other artefacts relating to Gardel and his former musical and film partners. Some of his clothing, including a few of his famous fedora hats, are also on show. The museum is open every week day, except Tuesdays, from 11am to 6pm and on Saturdays, Sundays and Holidays from 10am to 7pm. Entrance is one peso.

Paseo del Fileteado offers a glimpse of an art form which developed in Buenos Aires at the same time as tango was beginning to take a grip of the city’s poorer areas in the late 19th Century. The fileteado style, in which the artist typically blends spirals, flowers and strong vibrant colours around a central image, was used to decorate horse carts and later buses in the city. Today it is common to see fileteado images featuring Carlos Gardel and the lyrics he sung on city shops, cafés or buses. Paseo del Fileteado was created by six artists commissioned by the Carlos Gardel museum to mark its first anniversary in 2004. The museum’s neighbours, on Jean Juares 701 to 799, had to pledge to keep the artwork on their building for at least a year.
5

Pasaje Zeleya is a colourful, pedestrianised street which has been decorated with various mosaics and paintings of Carlos Gardel. There are also buildings painted with the musical scores and lyrics of some of the tango songs he made famous. The street is home to theatres El Cubo and Teatro Ciego and during the tourist high-season street performers are commonly seen entertaining tourists. A shrine to Argentine folk legend Gauchito Gil can be found in-between all the Gardel paraphernalia. The story of Gauchito Gil is one of a farmer who transformed himself into a sort of Robin Hood character but with supernatural powers. He was eventually killed in the 1870s and since then his legend has grown and similar shrines can be found throughout Argentina.
6

This bronze monument, which captures Gardel in a tuxedo and bow tie, was created by sculptor Mariano Pages. It was inaugurated in 2000 and stands next to the giant Abasto Shopping, a mall housed in the art deco splendour of the city’s former main market building. The statue itself is located on Pasaje Carlos Gardel, which features a number of stores trading in Gardel souvenirs and other tango related memorabilia. There are also a number of cafes but in truth the street is a little bit of a let down for one bearing the great man’s name and after taking in the statue there is not a great deal to see. However, for anyone venturing to Abasto in the evening there is the Esquina Carlos Gardel tango house right next to the statue which offers tango shows.
7

This underground station was inaugurated as Estacion Aguero in 1930 as part of the creation of the city’s second subway line - Linea B. The station’s name was changed to Carlos Gardel in the 1980s in recognition of the singer’s strong connection with the neighbourhood of Abasto. Various murals of the tango legend can be seen throughout the station. Two colourful creations by Uruguayan artist Carlos Paez Vilaro can be found next to the escalators serving the station’s two platforms. While another more surreal mural by Andres Compagnucci is located on the south platform. Finally, a portrait by Leon Untroib in the fileteado style hangs next to the ticket counters. In order to visit the final attraction, Carlos Gardel's tomb, it is advisable to take the subway from this station and get off at Federico Lacroze.
8

Gardel died when his plane crashed at an airport in Medellin, Colombia, on 24th June, 1935, while he was on tour of various Latin American countries. The crash also killed his long term lyricist Alfredo Le Pera and many of his musicians. The singer was at the height of his fame at the time of the accident, having just recorded three movies in New York. Fans swarmed to view his body as his remains were flown to Buenos Aires via New York, Rio de Janeiro and Montevideo. His body was moved to this tomb in November 1937 after having been kept at another site in the cemetery. The inauguration ceremony for the tomb again attracted a multitude of fans. Its main statue, which is known as the Bronze Smile, was created by sculptor Manuel de Llano. To this day fans pay tribute to Gardel by placing flowers in the gap between the left arm and also lit cigarettes between the right hand’s fingers. The cemetery is based on a grid system and although there are maps positioned at several locations, they are in poor condition and difficult to understand. Gardel's tomb is located in section one. If you enter through the cemetery's main neo-classical entrance, the best method of finding the tomb is to head two blocks down on the tree-lined boulevard and then five blocks to the left. Other tango greats buried in the cemetery include pianist Osvaldo Pugliese and bandoneon player Anibal Troilo. The 95 hectare cemetery site also contains the old cemeteries of the city’s German and English communities.