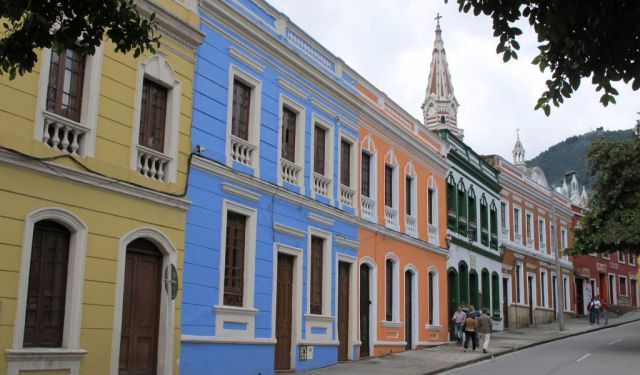 Today the historic district of Bogotá is a place of colonial churches, art museums and cafes. It is also where a country was born, around two hundred years ago. Don’t forget an umbrella, light weight jacket and some sunglasses – just in case. Bogotá weather can be quite unpredictable.
This article is featured in the app "GPSmyCity: Walks in 1K+ Cities" on iTunes App Store and Google Play. You can download the app to your mobile device to read the article offline and create a self-guided walking tour to visit the attractions featured in this article. The app turns your mobile device into a personal tour guide and it works offline, so no data plan is needed when traveling abroad.

First known as the Plaza Mayor, this has been the center of Santa Fe, the original name the Spanish chose for the city, for centuries. The Plaza was home to a bustling Friday market in colonial times. The Congress changed the square’s name to the Plaza de Bolívar in honor of the “Liberator” Simón Bolívar as an Italian-made sculpture was placed there in 1846, Of all the many statues in the world of the Caracas born Liberator, this is the first.

General Bolívar was the hero of the Battle of Boyacá in 1819, a battle that took place about 100 kilometers from Bogotá that effectively ended Spanish rule for good in Nueva Granada. Shortly thereafter, a new state called Gran Colombia was created which included Venezuela and Ecuador. Bolívar was its first president. He became a dictator a few years later in response to rising unrest in the large state. Bolivar died in Santa Marta in 1830 before able to seek exile in Europe.

Back to the plaza: In 1960 cars were forbidden from parking there and fountains were removed to convert the plaza into a strictly pedestrian zone. Today it’s a place where Colombians gather to protest, to celebrate, to mourn and to feed pigeons.

On November 6, 1985 the leftist M-19 guerrilla group stormed the Palacio de Justicia building, holding over 350 people hostage. Government forces coordinated their assault on the ministry from the Casa del Florero across the street. The fight concluded the next day with the building engulfed in flames. Over 55 people were killed, including 11 justices. Controversy remains to the day over the government’s handling of the crisis, and several victims were reported to be seen leaving the building alive, only to be discovered in a mass grave in the south of Bogotá. Ten people, mostly employees from the ministry cafeteria, were never heard from again. The government response was severely criticized by the Inter-American Commission on Human Rights as well as by a Colombian truth commission in 2005. In peace negotiations with the government of President Virgilio Barco, the M-19 demobilized in 1990, becoming a political movement.
3

The imposing Bogotá Cathedral towers above the east side of the Plaza, parallel with the mountains. The instantly recognizable façade of the Cathedral is one of the earliest examples of neoclassical architecture in the city. What you currently see is the fourth cathedral built on the very same site. Construction was begun in 1807 by a Capuchino brother. The tombs of Gonzalo Jiménez de Quesada, founder of Bogotá and independence figure Antonio Nariño are kept in a chapel on the right side.

The Capilla Sagrario, located next door to the Cathedral, is more interesting architecturally – and is definitely more cozy. This chapel was built in the 1600s, and is considered to be an excellent example of Santa Fe architecture. The interior is graced with a Mudejar- style vaulted wooden ceiling. Along the sides of the cross-shaped chapel are several works depicting scenes from the Old and New Testaments by Gregorio Vásquez de Arce y Ceballos. You can imagine the solemn ceremony that took place at the chapel that honored the Army and Simón Bolívar following their decisive victory at the Battle of Boyacá in 1819.

Austere on the outside, the interior of the Iglesia Museo Santa Clara, with golden floral motifs adorning the single nave and the wooden lattice work separating the choir from the sanctuary keeping the nuns invisible to the public, is an excellent example of Mudejar style in New Granada. Santa Clara was the initiative of the town’s first archbishop, who in 1619 received the support of King Felipe III to build a convent for Barefoot Franciscan nuns known as Clarisas. Originally the convent was to house 12 nuns who were descendants of conquistadors and 12 “creole” nuns. By 1696 100 nuns were living at the convent. Today only this beautiful church remains, strictly as a museum, and has a varied collection of religious art from the colonial era.
5

The neoclassical presidential palace, just past the astronomical observatory, is situated on the same spot as the birth house of Antonio Nariño, often called the first voice for independence in New Granada. In 1906 Nariño’s house was razed to make way for the first presidential palace. The same French architect who designed the Palacio Liévano on the Plaza de Bolivar, now home to the mayor's office, also assisted in this project. The palace served as home for Colombian presidents until 1948. When Liberal populist leader Jorge Eliécer Gaitán was assassinated on April 9, 1948, the naked body of the alleged assassin, killed by an angry mob, was dumped in front of the palace. During the violence of that day, called the Bogotázo - mobs tried to storm the palace and violence throughout downtown Bogotá resulted in more than 3,000 deaths. Military dictator Gustavo Rojas PInillas moved the presidency to the nearby Palacio San Carlos in 1954. It was not until 1978 when the building was renovated and given the name Casa de Nariño that it served once more as the presidential palace. During the reception following the 2002 inauguration of President Álvaro Uribe, the exterior of the palace was slightly damaged by missiles fired from FARC guerrillas. Unnoticed to many inside the event, some of the rockets landed on humble homes nearby killing thirteen, including three children.
6

The Iglesia de San Agustín, graced with a beautiful ceiling, was part of the first Augustinian monastery in Santa Fe, completed in 1668. An earthquake destroyed the two towers of the three-nave church in 1785. In 1861 in the midst of Liberal reforms, the Augustinians were kicked out and the government took control of the church and monastery. The next year the church was the scene of a presidential coup attempt during the Battle of San Agustín, as Conservatives attacked Liberals who were holed up in the church and adjacent convent. In 1867 the church was returned to the Augustinians, but the monastery remained under military control. The church suffered damage yet again during the Bogotázo riots of 1948. Plastered over bullet holes from the riots can still be seen on the neighboring Ministry of Finance building.
7

The Museo de Arte Colonial is located on the busy Carrera 6, a street bustling with college students on weekdays. Well worth a visit, the museum is situated in a 17th century building which served as a Jesuit college (which would evolve to become the Universidad Javeriana). Surrounding a quiet courtyard, and neighboring the Iglesia San Ignacio that was also built in the 17th century, the museum has a fine collection of art and religious artifacts from the colonial era, including the largest collection of works by Gregorio Vásquez de Arce y Ceballos, one of the most important figures of the Latin American Baroque movement. His paints portray the lives of Christ and the Virgin Mary as well as stories from the New Testament.
8

The Palacio de San Carlos was the home of the president of Colombia from 1825 until 1908. During the Bolívar dictatorship and the troubled times of the Gran Colombia experiment, Manuela Sáenz earned the nickname “Liberator of the Liberator” for helping Bolívar escape through a palace window, thus saving his life from an assassination attempt in 1828. A plaque marks the spot today. Seriously damaged during the unrest of April 9, 1948, the palace was restored and served once more as the presidential palace until 1979. Today it is home to the Ministry of Foreign Relations. Directly across from the palace is the Teatro Colón, built by an Italian architect in commemoration of the 400th anniversary of Christopher Columbus’ 1492 landing in the New World. The Colón hosts concerts and theater productions such as during the Bogotá International Theater Festival held every two years.
9

This, the “Manzana Cultural” or Cultural Block, is one of the most important addresses for the arts in Colombia. Across from the Biblioteca Luis Ángel Arango, one of the busiest libraries in the world, is the Botero Museum. Here, surrounding a sublime courtyard, are the corpulent paintings and sculptures by Fernando Botero as well as many works from his personal collection. They were all donated by this, one of Medellín’s most famous native sons. Botero has been called “Latin America’s most celebrated living artist” by the New York Times. While many of his works of everyday life in Colombian villages may seem comical, Botero also tackles the complex Colombian conflict without restraint.
10

Behind the Botero Museum are temporary exhibition spaces and the permanent collection of the Banco de la República located in the fomer mint where the New World’s first gold coins were created in the early 1600s. The permanent galleries, definitely worth an hour of your time, showcase the finest collection of Colombian art in the country, from the colonial era to present day.

One of the highlights includes the series of “dead nuns.” It was customary to paint nuns twice in their lifetimes – once when they entered the convent and again upon their death. The nuns from this series lived at the convent of La Concepción church. Understandably, some artists of the day refused to paint the dead nuns out of health concerns.

Another highlight is the spectacular if gaudy “La Lechuga” monstrance (a receptacle to hold the host). It’s called “La Lechuga,” meaning lettuce, because of its 1,486 emeralds. But it also glimmers with hundreds of diamonds, rubies, amethysts and pearls. The Spaniard who created this extraordinary piece charged the Jesuits the equivalent of $2 million US when he completed it in 1707. Essentially hidden away in a vault for over 200 years, it was acquired by the Banco de la República in 1987 for $3.5 million USD.

Nineteenth century landscapes, portraits by impressionist and Bogotá native Andrés Santa María, works from an array of well-known Colombian artists from the 20th century including Alejandro Obregon, Guillermo Wiedemann and many others are also on display.

We end this walking tour where we began, at the Plaza de Bolívar, and also at the house where the first cries for independence were heard on July 20, 1810- the Casa del Florero. On the corner above the Avenida Séptima this museum has recently been refurbished just in time for the celebration of the Colombian bicentennial. This is where the fight for Colombian independence began, over all things, a broken vase! Learn about this bizarre story, see the vase and even lounge in a hammock at the Museo de la Independencia. Although Colombians celebrate the 1810 date as their independence from Spain, this freedom was short-lived. The Spanish promptly sent General Morillo to ruthlessly “pacify” their former colony in 1815 beginning in Cartagena. It wouldn’t be until 1819 that a lasting independence was achieved.