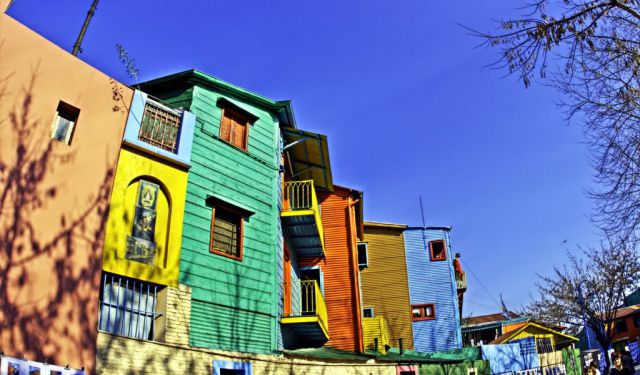 La Boca is one of the most visited parts of Buenos Aires and offers tourists a glimpse of how the city looked during its "golden era" in the late 19th and early 20th centuries. Indeed, La Boca, as the former main port, was instrumental in the city’s economic and population booms. The neighbourhood retains many fine examples of architecture from the time and is home to the Caminito open air museum and the famous Boca Juniors football club.
This article is featured in the app "GPSmyCity: Walks in 1K+ Cities" on iTunes App Store and Google Play. You can download the app to your mobile device to read the article offline and create a self-guided walking tour to visit the attractions featured in this article. The app turns your mobile device into a personal tour guide and it works offline, so no data plan is needed when traveling abroad.

Create Your Own Self-Guided Walks in Buenos Aires
Guide Name: Historic La Boca
Guide Location: Argentina » Buenos Aires
Guide Type: Self-guided Walking Tour (Article (A))
# of Attractions: 7
Tour Duration: 1.0 Hour(s)
Travel Distance: 2.4 Km or 1.5 Miles
Author: Paul Costello
Author Bio: My name is Paul Costello, I am 33 years old and I have lived in the city of Buenos Aires for almost a year. I moved here from the north of England after falling in love with the city’s architecture, vibrant nightlife and passionate people. I am a journalist by trade and have worked for the BBC as well as newspapers in the UK.
Sight(s) Featured in This Guide:
1

La Casa Amarilla, meaning yellow house in English, is a replica of the residence of the Irish-born “father of the Argentine navy“, Admiral William Brown. Born in 1777, the experienced and skilled sailor emigrated to Argentina in the early 19th Century and soon became involved in the new nation’s war with Spain. He was charged with leading a ramshackle band of ships against the Spanish in 1814 and eventually freed the River Plate from the control of the former colonial masters. During one of the battles his leg was shattered by a cannon ball but he continued to direct and give orders from his flagship, Hercules. This successful campaign was followed by further naval victories over Brazil and Uruguay. The house is located on an avenue named in the admiral’s honour and it now acts as the Historical Institute of Naval Studies.
Image by Lourdes Cardenal under Creative Commons License.
2

Debate still rages over which style of architecture inspired Guillermo Alvarez in designing this building. Was it the modernists of Catalan or the art nouveau movement? However, for locals the true interest in this structure is the legend that gave La Torre del Fantasma, or the Ghost Tower in English, its name. The story goes that a beautiful artist by the name of Clementina was living in the tower when a newspaper reporter came to interview her and take photographs of her paintings. When the photographs were developed the journalist was shocked to see three goblins within the artist’s room. Soon after the painter is said to have taken her life by throwing herself from the tower. Evidence to back up any details of the tale or even dates of when it is said to have happened are thin on the ground, but subsequent residents have reported hearing Clementina each night and some have even said that the goblins still reside there.
Image by José María Pérez Nuñez under Creative Commons License.
3

La Bombonera (the Chocolate Box) is famous throughout the world for the passionate Boca Juniors fans which pack its steep, almost vertical stands every match day. A host of football greats, including the legendary Diego Maradona, have graced the stadium with their skills since it was opened in 1940. The stadium contains the Museo de la Pasion Boquense, which boasts an array of Boca Juniors memorabilia together with trophies won by the club. Visitors can also purchase a tour of the stadium, which includes access to the players changing rooms. If you want to take in a game then the Argentinean season runs from the end of January to May and from August to December and league games are usually played on Friday, Saturday and Sundays, with international cup competitions taking place on Wednesdays.
Image by Steven Newton under Creative Commons License.
4

With its multi-coloured sheet metal houses, the Caminito (little pathway) is one of the postcard views of Buenos Aires, if not the whole of Argentina. The cobbled street only winds its way through the neighbourhood for 100 metres but it boasts a vibrant mix of tango dancers and markets stalls. It acts as an open air museum preserving a style of housing populated by immigrants to the city in the early 20th Century. Indeed the origins of the street’s colour scheme is said to result from locals using left over boat paint from ships entering the docks. The Caminito was named after a famous tango composed by Gabino Coria Penaloza and Juan de Dios Filiberto in 1926. Street shows and craft fairs are held on the street surroundings every Saturday and Sunday.
5

Fundacion Proa is a contemporary art gallery which opened on the riverside in 1996 after major renovation work to a dilapidated mansion. Following a further restoration in 2008 it now boasts four exhibition halls, a multimedia auditorium, a bookstore, a cafe and a terrace. The transparent facade has been designed to send out a message of openness to the rest neighbourhood and prevent it from becoming an island of artistic pretension in an otherwise down to earth area. Indeed the gallery has a history of reaching out into the neighbourhood and bringing art to the local people. To celebrate its 10th anniversary in 2006 it invited artists Gonzalo Córdova and Horacio Pigozzi to design a light installation for the nearby Nicolas Avellaneda transporter bridge.
6

This museum houses more than ninety works of Benito Quinquela Martin, one of Argentina’s most important artists. Born in La Boca in 1890 he overcame inauspicious beginnings, after being abandoned outside an orphanage as a baby. After studying drawing at a night school in La Boca and furthering his study in the city, he honed his talents in Europe and the United States. His works, many of which feature the dock workers and ships on the Riachuelo river, now hang in major museums across the world. A statue of Quinquela Martin was recently unveiled in Avenida Pedro de Mendoza, close to the museum, to mark the 120th anniversary of his birth. He died in Buenos Aires on January 28, 1977, and was buried in La Chacarita Cemetery.
7

This iron transporter bridge is the only one of its kind still standing in South America. Twenty similar bridges were built across the world and only eight are still in existence. It was opened in 1914 and was named after Nicolas Avellaneda, the president of Argentina from 1874 to 1880. It provided a link between the city and the province of Buenos Aires over the Riachuelo river for pedestrians and motorists until its closure in 1960. With increased use of the motorcar it became obsolete and had already been superseded by the new Nicolas Avellaneda road bridge which opened in 1940. This new bridge, which still stands behind the transporter bridge, is still in use to the present day. The transporter bridge has been declared a national monument and tentative plans for a restoration programme are being drawn up.