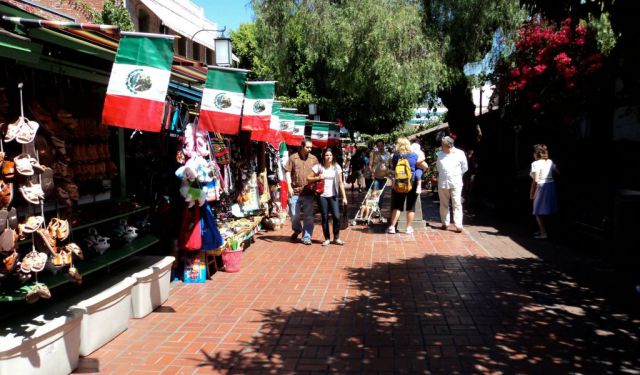 Los Angeles is the second largest city in the United States with a population of four million. It wasn’t always like that. In 1781, when Filipe de Neve, a Mexican provincial governor, founded El Pueblo de Nuestra Senora la Reina de Los Angeles (The Village of Our Lady, the Queen of the Angels) it was a sleepy village. Los Angeles was the first Spanish civilian settlement in Southern California.
This article is featured in the app "GPSmyCity: Walks in 1K+ Cities" on iTunes App Store and Google Play. You can download the app to your mobile device to read the article offline and create a self-guided walking tour to visit the attractions featured in this article. The app turns your mobile device into a personal tour guide and it works offline, so no data plan is needed when traveling abroad.

Across from the Plaza is the Pico House. Built in 1869-1870 it was advertised as the “finest hotel in Southern California.” It was Los Angeles’ first three-story building. Owned by Pio Pico, the last governor of Mexican California, raised the money to build this building by selling his land in the San Fernando Valley. The hotel had 82 bedrooms, 21 parlors, 2 interior courtyards and a French restaurant on the ground floor. Pico lost control of the hotel in 1880 due to a foreclosure. The new owners named the establishment the National Hotel. Currently, the ground floor of the building is being used for special events while the rooms on the second and third floors are not utilized.
2

2) Our Lady Queen of Angeles Church

The Franciscan Fathers built the Church of Our Lady Queen of the Angeles, a Catholic church. Construction was completed on August 18, 1814. Under the leadership of Reverend Thomas Conaty, the bishop of Monterey and Los Angeles, the church was enlarged in 1912. It is a California Historical Landmark

During the 1980s, when refugees from El Salvador were threatened with deportation, the church served as a sanctuary for these people. Father Luis Olivares, pastor of the church from 1981-1989, headed the refugee movement. The small street just north of the church, Paseo Luis Olivares, was named in his honor.

The refugee movement was still alive this past decade. On August 19, 2007, immigration activist, Elvira Arellano, was arrested outside this church and deported to her native Mexico. Her issue surrounds her 8-year old U.S. born son. Deportation separates families. The Pew Hispanic Center estimates 3.1 million children of the 12 million illegal immigrants are U.S. citizens by birth.

The Olvera Street Plaza was the center of community life in old LA. The church was nearby, and government and business matters were conducted here as well as local festivals—weddings and baptisms.

The original pueblo, about 45 square leagues, is equivalent to 277 square miles. (LA today is 498 sq. miles). The statue at the east end of the plaza is of King Carlos III. He was the Spanish monarch who ordered the establishment of this outpost for a resting place for his troops in 1781.

The statue to the west of the Plaza is Felipe de Neve, the Spanish governor of Alta California. He selected this site because it was near the Porniuncula River (Los Angeles River). However, the river flooded, so the plaza was moved west of here. After the church across Main Street was built in 1822, the Plaza was relocated here.

On the south side of the Plaza note the Pobladores Plaque. It lists the eleven civilian families who first settled Los Angeles. There were 22 adults and 22 children, all of who were recruited from Sinaloa and Sonora provinces in New Spain (Mexico). In those days, Mexican immigration was encouraged. The settlers provided food for King Carlos’ soldiers to help Spain secure a firm hold on this region.

Avila Adobe is the oldest building in Los Angeles. Built in 1818 by Don Francisco Avila, a Los Angeles ranchero, the home served as his townhouse and office. His other home, the ranch house or main family residence, was ten miles away at Rancho Las Cienegas. (This is in today’s Wilshire “Miracle Mile” District.)

Francisco Avila was one of many Californios living in Alta California involved in ranching. He raised cattle, horses, and mules. American fur trapper, Jedediah Smith, stayed here during his 1826 visit and was impressed by Avila’s wealth.

Native of Sinaloa, Mexico, Don Francisco Avila immigrated to Pueblo de Los Angeles in 1794. He became a prosperous ranchero and married Maria del Rosario Verdugo, a local woman. In 1810 he became alcalde or mayor of the pueblo. (Avila wasn’t LA’s first mayor. Jose Vanegas, a member of one of the original 11 families, held that distinction when he was appointed alcalde in 1788.)

The Avila Adobe has an interesting history. Twenty-five years after Avila’s death, Commodore Robert F. Stockton marched into Pueblo de Los Angeles with his troops during the Mexican-American War. Stockton used the adobe as his headquarters until the Treaty of Cahuenga ended hostilities in 1847.

Over the years, this home was rented out or served as a boarding house. As the center of Los Angeles moved southwest, this home and the surrounding area deteriorated. In 1926 the city of Los Angeles condemned the adobe and scheduled it for destruction by a wrecking ball.
5

The efforts of Christine Sterling saved Avila Adobe from that wrecking ball. Sterling loved history and was appalled at how LA’s roots were about to be destroyed. Plans were in place for a railway station to be built here. With the help of a few wealthy friends, Sterling had the adobe restored and transformed Olvera Street into a Mexican style marketplace. In 1930 Olvera Street was opened to the public as a tourist attraction.

The History of Water in Los Angeles Exhibit exists side by side with the Christine Sterling Exhibit to the rear of the adobe. Photographs and captions show how a dusty pueblo was transformed into the City of Los Angeles through the efforts of its citizens to bring water to this thirsty desert town.
6

Across the street from Avila Adobe is the Pelanconi House, the oldest fired brick house in Los Angeles. Italian vintner Giuseppi Covaccichi built the home between 1855-1857. Covaccichi and his partner owned a winery across the street.

Built in 1887, the Sepulveda House is located a few buildings south of the Pelanconi House on Olvera Street. This is a Victorian style home built by Eloisa Martinez de Sepulveda for $8000. Originally, it contained 22 rooms, 2 commercial businesses, and 3 residences. Since the early 20th Century, the Sepulveda House has been a bordello, a tearoom, and during World War II, a USO canteen.

After the building was restored it housed the Visitors’ Center and an 18-minute film on the history of El Pueblo de Los Angeles. These attractions were recently moved to the Avila Adobe.

The Chinese American Museum is the newest museum in El Pueblo de Los Angeles Historic Monument. Opening its doors in 2001, it is the only museum dedicated to telling the history of Chinese immigrants to Los Angeles. Its mission is to foster understanding and appreciation of the contributions of Chinese Americans, who lived in the Los Angeles area for more than 150 years.

The 1882 Chinese Exclusion Act barring Chinese immigration dwarfs today’s fury over illegal immigration. During World War II, only 105 Chinese were permitted to enter this country. Since 1965, our door has reopened to them.
9

The Plaza Firehouse began construction in May 1884 and was opened for business four months later. It cost the City of Los Angeles $4665. It was the city’s first fire station. Architect William Boring designed the building following a fashion used in his home state of Illinois. Horses were stabled inside the station, a custom followed in colder climates. A unique turntable was built into the floor making it necessary to back the horses in and out.

At first the fire department was all volunteers, however, constant arguing amongst the fire fighters motivated the city to establish a paid company in 1885. The volunteers soon disbanded. Due to a few legal issues, Engine Company No 1 moved and the Firehouse became a saloon, then a boarding house, a drugstore, and even a vegetable market. In 1960 the building was restored and became a museum. The pictures on the walls inside the Firehouse show the history of this 19th Century fire department.