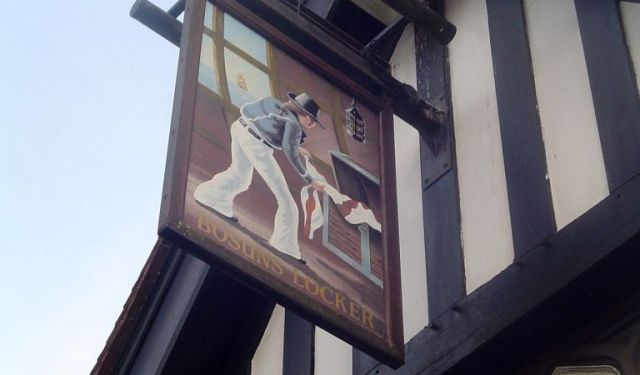 Explore the history of Southampton through seven historic pubs and bars that have served and accommodated some of the city’s most famous visitors, including King Henry V, Jane Austen, William Shakespeare, Queen Victoria and Lord Nelson. Enjoy and drink and soak up stories of Agincourt, the Pilgrim Fathers and the crew of the Titanic.
This article is featured in the app "GPSmyCity: Walks in 1K+ Cities" on iTunes App Store and Google Play. You can download the app to your mobile device to read the article offline and create a self-guided walking tour to visit the attractions featured in this article. The app turns your mobile device into a personal tour guide and it works offline, so no data plan is needed when traveling abroad.

On this sight, back in the early nineteenth century, was the home of Jane Austen, the famous author of classic works such as ‘Sense and Sensibility’, ‘Pride and Prejudice’ and ‘Mansfield Park’.

Jane and her widowed mother came here in 1807 to stay with her brother, Frank, a naval captain, and his wife, Mary.

They rented the house from the Marquess of Landsdowne, who lived opposite in a mock-gothic castle. It came with a large garden that backed onto the old city walls, which was reached by the river when the tide was high. A set of steps allowed them to ascend the walls and enjoy the unspoilt western views across Southampton Water and the New Forest.

Jane lived here until the spring of 1809 when she and her family moved thirty miles North West to the village of Chawton, where she lived for the remainder of her life.

In 1740 a natural freshwater spring was discovered at nearby Chalybeate and Southampton was transformed into a fashionable spa town, attracting the great and the good to sample the waters. Many people travelled by coach from London and so many coaching inns sprung up in the city centre to accommodate them, including the Star Hotel which was built in the late 1700’s.

Perhaps the most famous visitors to grace the building were the Duchess of Kent and Princess Victoria, later to become Queen Victoria, who stayed here in 1831. Today, her visit is commemorated by a bedroom suite and the Royal Standard that sits proudly on top of the building.

Dating back to at least the 15th century, this old coach house has accommodated and entertained many famous people through the ages, including William Shakespeare, who performed with his players in the courtyard.

Queen Victoria stayed here regularly on her way to Osbourne House on the Isle of Wight, stabling her coach and horses in the yard. Another visitor was Lord Nelson, who stayed here on 13th April 1801, just a few days after receiving his promotion to Vice Admiral of the Blue.

The famous author, William Makepeace Thackery, wrote part of his classic novel ‘Pendennis’ here, supposedly writing much of it whilst sitting in the large bay windows that dominate the exterior. Another author, Jane Austen, was also a regular visitor, attending the fashionable fortnight assemblies and celebrating her 18th at the hotel on the 16th December 1793.

Other famous people to have stayed include Orsen Wells, Richard Burton and Elizabeth Taylor, who all stayed before boarding transatlantic cruise liners to America.

The hotel has a bar and restaurant where you can enjoy a drink and possibly spot one of the six resident ghosts that walk the corridors.
4

4) The Duke of Wellington

Dating back to the 12th Century, this building was built upon Norman vaults and cellars and owned by Benedict Ace, one of Southampton’s first Mayors.

In 1338, a French raiding party of several thousand soldiers, sailors and pirates set upon the city, sacking and damaging many of the buildings, including this one which needed extensive repair. One of the pirates, Lanfranco Grimaldi, used his booty to go on and capture the Principality of Monaco, which is still ruled by the Grimaldi family today.

In 1494 the building was bought by Roland Johnson, a Dutch brewer, who came over from Holland and opened up a brewery and pub for the first time, which he called ‘The Bere House’.

It has remained an Inn ever since and has bore silent witness to some of the city’s most historical events. The Pilgrim Fathers would have passed it on their way to the Mayflower - moored at the bottom of Bugle Street - as would Henry V and his troops as they marched through the nearby Westgate on their way to Agincourt.

In 1771 the pub was renamed ‘The Shipwright’s Arms’ to reflect the many ship workers, sailors and dockers that frequented the area. Then in June, 1815, it was renamed again, changing to ‘The Duke of Wellington’, to commemorate his victory at the Battle of Waterloo.
5

With its cellars dating back to 1148, The Red Lion is one of the oldest pubs in Southampton and was the location of a major historical event. It was here in 1415 that Henry V held the trials of three traitors, before departing for the Battle of Agincourt.

Richard, Earl of Cambridge, Lord Scrope of Masham and Sir Thomas Grey of Heton were all charged with conspiring to kill the King and were tried in a make-shift court room within the pub, known forever after as ‘Henry V’s Court Room’. The three men were found guilty, condemned to death and summarily executed at the nearby Bargate, located at the North end of the High Street. A commemorative rubbing describing the event can be seen in the Court Room. The trial would later be featured in William Shakespeare’s famous play, ‘Henry V’.

It may come as no surprise to hear that the pub is supposedly haunted, being home to twenty one ghosts, including an old grey haired woman frequently seen standing behind the bar. Step inside and explore the creaky staircase and timbered galleries of this beautiful Tudor building.
6

The Grapes is a grade two listed building and was built in the early nineteenth century, with the wrought iron signage above the doors being added a few years later. Being so close to the docks, the pub has always been popular with crew and seaman, especially fireman and engine room workers who would pop in for a pint before their leaving on their latest voyage.

The pub is known locally as the ‘Titanic Pub’, for its collection of Titanic photographs and memorabilia, including a signed full-sized blueprint of the ship’s design.
7

Built in 1870, the Admiral Sir Lucius was once the official headquarters of the Eastern Docks, Southampton’s first purpose built dockyard. The harbour has since been transformed into Ocean Village, a yacht marina and entertainment centre, but back in the day the area was known as Mudland and was chosen as the new dock site due to its natural deepwater channels, which enabled larger ships to berth.

The foundation stone for the new dock was laid on the 12th October 1838 by Admiral Sir Lucius Curtis in front of a massed crowd of twenty thousand people.

Curtis was a career Naval man, joining as a boy and quickly rising through the ranks, becoming Captain of the HMS Magicienne at the age of just twenty four. He served in the Napoleonic War, most notably during the blockades of the French-held islands of Ile Bonaparte and Ile de France in the Indian Ocean. On his return to England his career continued to flourish, being made a Companion of the Order of Bath in 1815, a Knight Commander of the Order of Bath in 1862 and then Admiral of the Fleet, the Navy’s highest rank, in 1864.

The docks themselves have been witness to many historical events. When the Crimean War broke out in 1854 many of the troops passed through here, boarding ships to take them to the port of Sebastopol in Russia, now the Ukraine.

Similar troop deployments was repeated again for the Boer War of 1899 and the First World War in 1914.

At the end of the building are two memorial plaques that commemorate the dock workers and seaman that lost their lives during the First and Second World Wars.

RMS Titanic; the infamous ship that sank after hitting an iceberg during her maiden voyage from Southampton to New York on April 15th 1912. Known as one of the deadliest maritime disasters in history, 1,517 lives are thought to have been lost. Follow The Titanic Trail through the city to see where crew and passengers spent their last days before the fateful voyage, where family and friends...  view more

Southampton is a bustling coastal city drenched in history, with roots dating as far back as the Stone Age. Here are the most interesting places to visit to find out more about Southampton’s past. ***PH***