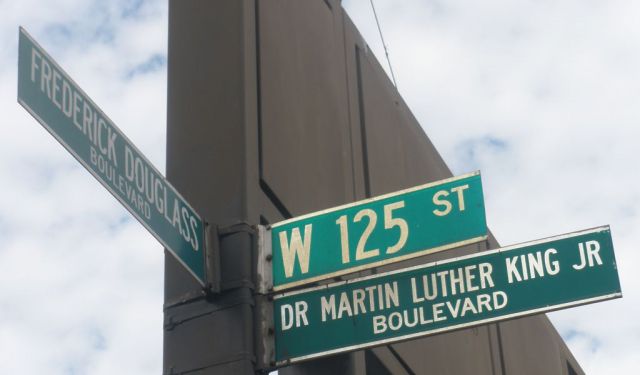 In the Heart of Harlem, New York, New York (A)

Harlem is world-renowned as a hub of black culture. Its history is full of anecdotes about African-Americans--past and present, rich and poor, famous and infamous. The neighborhood continues to be a popular destination for all those who want to sneak a peek at American life and 125th Street remains the heartbeat of Harlem.
This article is featured in the app "GPSmyCity: Walks in 1K+ Cities" on iTunes App Store and Google Play. You can download the app to your mobile device to read the article offline and create a self-guided walking tour to visit the attractions featured in this article. The app turns your mobile device into a personal tour guide and it works offline, so no data plan is needed when traveling abroad.

Create Your Own Self-Guided Walks in New York
Guide Name: In the Heart of Harlem
Guide Location: USA » New York
Guide Type: Self-guided Walking Tour (Article (A))
# of Attractions: 8
Tour Duration: 2.0 Hour(s)
Travel Distance: 1.6 Km or 1 Miles
Author: Joy Polanco
Author Bio: Joy is a 2008 graduate of Columbia University’s School of Journalism. She started her broadcast career in 2000 as a radio news reporter. In 2002, she was the winner of the Outstanding Achievement Award for Excellence in Broadcasting by the New York State Broadcasters Association. Joy continues her pursuit of a career in broadcast journalism.
Author Website: http://cibijoy.wordpress.com
Sight(s) Featured in This Guide:
1

The century old newspaper started as a publication to focus on Black life in America. On December 4, 1909 a man named James H. Anderson sat down at a dressmaker’s table with six sheets of paper, a pencil and $10, which he used to invest in what would later be called the New York Amsterdam News. He sold the paper back then for 2 cents a copy outside of his mid-town Manhattan home. Eventually as more and more African-Americans migrated to Harlem and his paper grew in popularity, Anderson moved its headquarters to Harlem in 1910. It has been at its current address since the early 1940's and the paper is still being circulated to date. Devoted to stories about Harlem, the Amsterdam News has also been credited by the New York Times as having a great deal of persuasive power in many other African-American communities.
2

This movie theater began as part of a chain of Magic Theatres across the country. The goal of the venture was to build first-rate multiplexes in urban neighborhoods. In addition to providing a high-quality service, the theatres create jobs and encourage local economic growth and development. After the Harlem movie theater was built about a decade ago, multiple businesses followed suit including Old Navy, Disney and Starbucks. Former NBA player, Earvin "Magic" Johnson is the chairman of Magic Theatres. Johnson opened his first theater in 1995 in Crenshaw, a town in south central Los Angeles, California. Crenshaw is an area plagued with drugs and gang violence but the movie theatre became a precious gem in the troubled community. It is now closed to undergo extensive renovations and currently only two Magic Theatres remain up and running, one in Washington D.C. and this one in Harlem, U.S.A. Tel: (212) 665-6923
3

This former burlesque house opened its doors on January 26, 1934 as the 125 Street Apollo. For quite some time, Apollo was the only theater in New York City to have black entertainers. Over the years, it has earned its reputation as the place "Where Stars are Born and Legends are Made", by launching the careers of several superstars including Billie Holiday, James Brown, The Jackson 5, Diana Ross and The Supremes. Most notable is Ella Fitzgerald, who made her singing debut on Apollo's stage during Amateur Night at the tender age of 17. Box Office: (212) 531-5305
4

Once known as the "Waldorf Astoria" of Harlem, the 300-room Hotel Theresa had an impressive roster of past guests. Louis Armstrong, Lena Horne, Josephine Baker, Dorothy Dandridge, Duke Ellington and even Fidel Castro are just some of the famous clientele who've either stayed or lived at the hotel. Upon its opening in 1913 and until the construction of the Adam Clayton Powell Jr. State Office Building in 1973, the hotel was the tallest building in Harlem. Hotel Theresa boasts a neo-renaissance style with a striking white brick facade and was declared a historical landmark in 1993. Although the hotel closed more than 40 years ago, the building remains open and is now called Theresa Towers.
5

This nineteen-story high-rise is named after the first African-American elected to Congress from New York. Construction of the building was completed in 1974 and was originally called the Harlem State Office Building. It was renamed after the former Congressman in 1983. Adam Clayton Powell Jr. represented Harlem in the U.S. House of Representatives from 1945 to 1971. He was a vital supporter of important civil rights legislation during his service. In 1970, he was defeated in his election to a much younger Charlie Rangel amid allegations of corruption. The Adam Clayton Powell State Office Building has the dubious distinction of being the tallest building in Harlem and a bit of an eye-sore. The “killer building” is perceived by some as a visual nuisance from the era of mass urban renewal. One of its positive attributes however is its front plaza called African Square. In addition to having a farmer’s market operating during the spring through early fall, it’s also used for summertime staged musical performances. Tel: 212-961-4390
6

6) The Studio Museum in Harlem

This is the place to go if you want a definite cultural experience during your Harlem visit. Containing more than 1600 contemporary and permanent works of art, the museum puts a spotlight on African culture. Founded in 1968, The Studio Museum devoted itself to showcasing the artwork of 19th and 20th century Black-American artists. This includes the work of James Van Der Zee, who photographed Harlem life and celebrities during the 1920's through the 1980’s. The museum continues its mission of education and features an Artist-in-Residence program to advance talented artists of African and Latino descent. The museum is located in a small enough space which makes it inviting and accessible. It also features a shop with merchandise that nicely compliments all that the Studio Museum represents. Tel: 212.864.4500 Fax: 212.864.4800

Famous for their "soul food", the restaurant was founded by entrepreneur Sylvia Woods in 1962. In addition to its high-profile patrons such as Bill Clinton, Nelson Mandela and Jesse Jackson, Sylvia's has become known for its down-home southern comfort cuisine. As a result, Sylvia has been dubbed the "Queen of Soul Food". Born in South Carolina in 1926, Mrs. Woods is an American success story. The restaurant is complimented by a private catering business and sells a full line of soul food products available in supermarkets and grocery stores nationwide. In the 1990’s, Mrs. Woods published two cookbooks called Sylvia’s Soul Food Cookbook and Sylvia’s Family Soul Food Cookbook. As the mother of four children, Sylvia’s has become a family dynasty and Sylvia Woods has become a household name. Tel: (212) 996-2669 Fax: (212) 427-6389

Originally called Mount Morris Park, Marcus Garvey Park is located in Harlem’s Mount Morris Park Historic District. Some of the area’s finest brownstones surround its more than 20-acres, which are maintained by the New York City Department of Parks and Recreation. The park features a natural rock formation, a fire watchtower, an amphitheater and playgrounds. In 1973, Mount Morris Park was named after the black nationalist leader Marcus Mosiah Garvey, Jr. Garvey was born on the island of Jamaica in 1887. While in Harlem, he gave speeches advocating for the civil and human rights of all people of African ancestry. The more than 150-year-old park is one of the oldest public squares in Manhattan and an integral part of Harlem life.