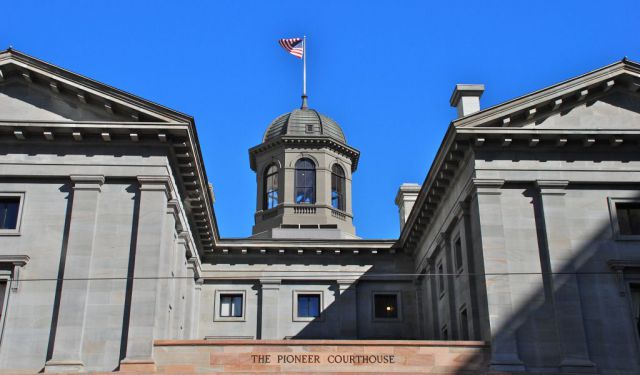 While Portland lacks the dramatic landmarks of Seattle's Space Needle or the St. Louis Arch, a number of city parks, statues, and historic buildings are found throughout the city. Sites on this tour include the Portlandia statue, the Arlene Schitzer Concert Hall, Pioneer Courthouse Square, the Benson Hotel, the Lan Su Yuan Classical Chinese Garden, and the Tom McCall Waterfront Park.
This article is featured in the app "GPSmyCity: Walks in 1K+ Cities" on iTunes App Store and Google Play. You can download the app to your mobile device to read the article offline and create a self-guided walking tour to visit the attractions featured in this article. The app turns your mobile device into a personal tour guide and it works offline, so no data plan is needed when traveling abroad.

Create Your Own Self-Guided Walks in Portland
Guide Name: Landmarks
Guide Location: USA » Portland
Guide Type: Self-guided Walking Tour (Article (A))
# of Attractions: 7
Tour Duration: 3.0 Hour(s)
Travel Distance: 2.2 Km or 1.4 Miles
Author: Jim Reynoldson
Author Bio: Jim Reynoldson is an avid traveler and writer who grew up on Oregon. He enjoys hiking, camping and sightseeing throughout the Pacific Northwest and beyond.
Sight(s) Featured in This Guide:
1

Opened in September of 2000, the Lan Su Classical Chinese Garden was constructed at a cost of $12.8 million to accurately replicate the tranquil gardens of Suzhou – Portland’s sister city in China. Filled with plants indigenous to China and construction materials shipped from China, the garden is approximately 40,000 square feet in size, with an 8,000 square foot lake. The gardens host a series of weddings, concerts, and other events. Visiting is a bit odd – with the serenity of the garden surrounded by the hustle and bustle of the city, and huge buildings towering overhead – but this is a great place to simply relax and recharge.
Image by Eleonora corsi under Creative Commons License.
2

Built in 1912, the Benson Hotel’s posh sophistication and prime downtown location have made it the lodging of choice for VIP guests of the city – from U.S. presidents to foreign dignitaries to a variety of celebrities. Named for philanthropist Simon Benson, the 287-room hotel was built in response to a city population boom in the early part of the twentieth century, and added to the National Historic Registry in 1986. Despite the elegance of the Benson, it is a pet-friendly hotel – for a $25 fee – reflecting the city’s love of dogs seen at many businesses. Onsite restaurants include the award-winning London Grill and the fantastic steak house El Gaucho.
Image by sporst under Creative Commons License.
3

The outdoor centerpiece of downtown, Pioneer Courthouse Square sits adjacent to the courthouse built in the 1860s. The 40,000 square foot red brick amphitheater of the square hosts an ongoing variety of concerts, festivals, and other events – including an unannounced 1am stand up comedy performance by Dave Chappelle in 2009 that drew thousands of tech-savvy fans who were able to find out ahead of time through social networking. Pioneer Courthouse Square originally opened in 1984 after a series of financial setbacks. A few artistic elements were added to the square, as well – including the “Allow Me” sculpture of a businessman holding an umbrella (very appropriate for a city that sees its share of rain) and an art installation called the “Weather Machine”, which seeks to forecast the next day’s weather with an array of dramatic bells and whistles.
Image by LWYang under Creative Commons License.
4

The beautiful Arelene Schnitzer Concert Hall occupies the old Portland Public Theater building, which dates back to 1928. In 1930, the building became the Paramount Theater, and was added to the National Register of Historic Places in 1976. Opened in its current form in 1984, the Schnitzer hosts a variety of concerts, theater, symphony, and dance events. One of the buildings making up the Portland Center for the Performing Arts, the aesthetics and acoustics are amazing in this Italian Rococo style hall seating over 2700 people. Look for the 65-foot “Portland” replica marquis above the Schitzer on Broadway, which was added to the building in 1984.
Image by Another Believer under Creative Commons License.
5

This 34-foot classical style copper repousse statue is the 2nd largest of its kind in America, behind only the Statue of Liberty. Created by Raymond Kaskey and installed in 1985, Portlandia holds a trident in one hand as she reaches the other hand down toward visitors of the Portland Building, emulating the official city seal. Because Portlandia is bending down, it’s easy to miss this sculpture – were she standing upright, she’d be a more conspicuous 50 feet tall. Originally built in pieces in Maryland, Portlandia was shipped to Portland by train, assembled, and then floated by barge up the Willamette River to its current location.
Image by Jason Brisch under Creative Commons License.
6

Spanning roughly two miles and 36 acres along the Willamette River seawall, the Tom McCall Waterfront Park is a collection of lawns, pathways, and fountains for enjoying the riverside boardwalk. The Salmon Street Springs Fountain offers a cool respite from summer heat, and several river cruises leave from this park. This centrally located park also hosts a number of events, including the annual Rose Festival Fun Center and Waterfront Blues Festival. The seawall was constructed in 1920 to address flooding concerns that sometimes threaten the city. Oregon Governor Tom McCall called for a study in 1968 to look into building a park along the seawall, and the park was completed in 1978. In honor of his efforts, the park was officially named after Tom McCall in 1984.
Image by Gezzas Man under Creative Commons License.
7

A variety of cruises on Portland’s Willamette River are offered in this 150-foot yacht. Brunch, lunch and dinner cruises – along with a number of non-catered sightseeing cruises – typically run south to the Lake Oswego area before returning through downtown Portland on the return trip. Cruises are normally between 2-3 hours long and food, drinks, live music, and a dance floor on the three-deck boat allows cruisers the option of either an energetic or relaxing experience. To ramp up the energy factor, an alternative jet-boat tour is available, or even a sternwheeler cruise through the nearby Columbia River Gorge. To end the tour, simply walk north along Naito Parkway – which parallels Waterfront Park – for three blocks to Morrison Street, then walk three blocks west to the MAX light rail stop. The MAX will take you westbound into downtown.
Image by dmytrok under Creative Commons License.