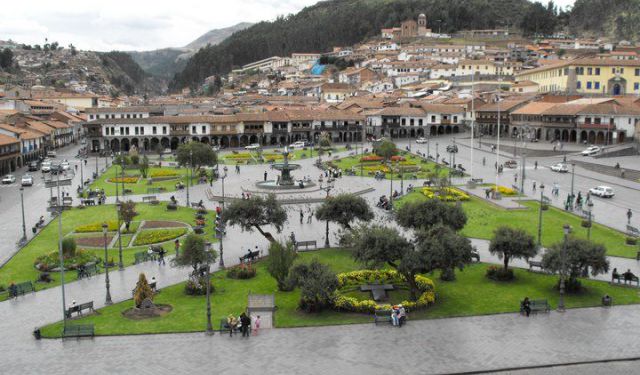 Landmarks of Cusco, Cusco, Peru (A)

The Landmarks of Cusco are a collection of sites that range from Inca (and even pre-Inca) history through the Spanish colonial era to modern day Cusco. As in much of Latin America, the city is built around a primary plaza (the Plaza de Armas) and a handful of secondary and minor plazas. This tour will touch on these plazas, as well as some of the historical architectural remnants of the Inca Empire.
This article is featured in the app "GPSmyCity: Walks in 1K+ Cities" on iTunes App Store and Google Play. You can download the app to your mobile device to read the article offline and create a self-guided walking tour to visit the attractions featured in this article. The app turns your mobile device into a personal tour guide and it works offline, so no data plan is needed when traveling abroad.

Create Your Own Self-Guided Walks in Cusco
Guide Name: Landmarks of Cusco
Guide Location: Peru » Cusco
Guide Type: Self-guided Walking Tour (Article (A))
# of Attractions: 8
Tour Duration: 2.0 Hour(s)
Travel Distance: 1.6 Km or 1 Miles
Author: Jim Reynoldson
Author Bio: Jim Reynoldson is an avid traveler and writer who grew up in Oregon. He enjoys hiking, camping, and sight-seeing throughout the Pacific Northwest and beyond.
Sight(s) Featured in This Guide:
1

This wonderful area of Inca ruins is found right along the busy Avenue el Sol, and right below the Iglesia de Santo Domingo. Once an important Inca temple, this structure actually now forms the base of Santo Domingo, and the Qorikancha (“Golden Courtyard”) below was once covered in gold and silver artworks and replicas – which were quickly looted by the conquistadors. Build in the mid-15th century under the rule of the tenth Inca ruler, Tupac Yapanqui, this site was also an important center for religious ceremonies, a tomb for Inca nobility, and a celestial observatory used by Inca high priests.
2

One of the best preserved examples of Inca stonework can be found in this narrow alleyway leading southeast away from the Plaza de Armas, running right next to the Iglesia de la Compania de Jesus. The two walls of the alleyway belonged to two different Inca sites. The south-side wall was part of Amaruquancha (Courtyard of the Serpents) – the site of the palace of Huayna Capac. The north-side wall was part of Acllahuasi (House of the Chosen Women), where attractive young virgins were trained to become concubines to Inca nobility. The alleyway not only has fascinating history, but serves as a natural route between the Plaza de Armas and the busy commerce area along the Avenue el Sol.
3

The Inca walls forming this alleyway serve as a gateway between the Plaza de Armas and the artsy San Blas district, uphill and northeast of the city’s center. A number of small shops and restaurants line this street, but the primary attraction is the iconic twelve-sided stone, set among walls of insanely precise Inca masonry. The stone wall actually belonged to the sixth Inca ruler, Inca Roca. Just one word of warning: you will be hounded by a group of well-informed young people hoping to serve as impromptu tour guides – telling you the history of the stone for a tip.
4

This tiny, pleasant plaza is positioned between the hipster hillside district of San Blas and the Plaza de Armas. Small benches and trees form the center of this plaza, and it is surrounded by a number of restaurants, bars, and museums – most notably, the Museo de Arte Precolumbino, which houses a beautiful collection of pre-Columbian artifacts and artwork. If you fancy a drink, a couple of good bars – Fallen Angel and Mandela’s – are both found very nearby. Also next to the Plazoleta de las Nazerenas is the Iglesia de San Antonio, built under the direction of Bishop Mollinedo between 1678 and 1699.
5

Tucked away just to the northeast side of the Plaza de Armas is this tiny plaza, where you’re likely to find a number of nearby street vendors selling woven goods and other items. This plaza is also adjacent to the Museo Inka, which is a wonderful place to experience the regions ancient Inca history. Also next to the plaza is the Colegio San Francisco de Borja – which was a colonial-era educational institution specializing in the education of Inca Nobility. Founded in 1575, and changing locations throughout the centuries, the institution was intended to teach children conformity to church teachings and to “unlearn” the ancient teachings of their parents and ancestors.
6

Cusco’s central public plaza is abuzz with activity much of the time. Surrounded by historic cathedrals, cafes, pubs, upscale shops, hotels, and restaurants, the Plaza de Armas is gorgeously landscaped. The fountain in the center attracts a large number of photographers among the many foreign tourists (due to Cusco’s proximity to the Inca ruins at Machu Picchu), as well as merchants hawking souvenirs. Originally twice the size during the Inca period, this same site also served as a public cultural space, and was called “Huacaypata”. In 1532, Pizarro, having conquered the Inca, gave the space its current name and using some of the original space to house the many cathedrals that border the plaza today.
7

While there’s nothing particularly unique about this plaza, it’s a comfortable place to rest – with benches and a fountain in the center. Perhaps the best quality of the Plaza Regocijo is the location. It’s only a block away from the Plaza de Armas, but much more laid-back. You’ll be much less likely to be accosted by touts and salespeople here, and it’s adjacent to two important museums – the Museo Municipal de Arte Contemporaneo and the Museo Historico Regional – as well as a number of restaurants, bars, and shops. In addition it’s also just a block away from a number of Cusco’s historic cathedrals.
8

This plaza resembles the Plaza de Armas in size and high activity level – in part, because it is adjacent to the National College of Arts and Sciences (which was actually founded by Simon Bolivar, who championed South American independence from the Spanish Empire during the early 19th century). A few blocks out of the city’s center, the Plaza San Francisco is also next to the Iglesia de San Francisco, very near the Iglesia de Santa Clara, and next to a number of restaurants, hotels, and shopping opportunities. The plaza itself is very nice, with a good amount of shade, benches and a central fountain. From this plaza, a quick walk to the northeast will put you right back at the center of town at the Plaza de Armas.

Cusco, once the capital of the Inca Empire, is one of the oldest cities in the world. In the 16th century Spanish missionaries brought Catholicism to Cusco. Take this self-guided walking tour to learn about fascinating Inca religious rituals and see the beautiful religious art in Cusco's Colonial-era churches.