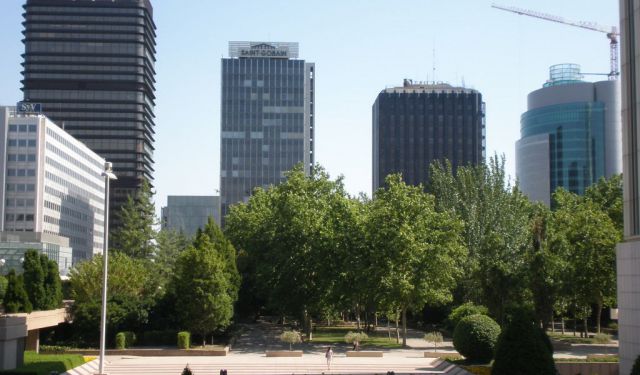 Madrid is not a city famous for its skyscrapers because they are not particularly very tall and record breaking. However, its still a very fascinating city for its tall buildings, some of which have survived the Spanish civil war and while others represent the breakthrough of some of the country´s financial institutions and architectural achievements.
This article is featured in the app "GPSmyCity: Walks in 1K+ Cities" on iTunes App Store and Google Play. You can download the app to your mobile device to read the article offline and create a self-guided walking tour to visit the attractions featured in this article. The app turns your mobile device into a personal tour guide and it works offline, so no data plan is needed when traveling abroad.

Create Your Own Self-Guided Walks in Madrid
Guide Name: Madrid´s Skyscrapers
Guide Location: Spain » Madrid
Guide Type: Self-guided Walking Tour (Article (A))
# of Attractions: 8
Tour Duration: 2.0 Hour(s)
Travel Distance: 11.1 Km or 6.9 Miles
Author: Sarah Serakalala
Author Bio: A resident of Madrid since 7 years as well as a blogger. Sarah is an enthusiast of the city´s culture and historical background. When she's not putting together apps, she likes to take walks in the park or go out for tapas!
Author Website: http://www.cheapinmadrid.com
Sight(s) Featured in This Guide:
1

The Torre de Madrid (Tower of Madrid) is one of the tallest buildings in Madrid. It measures 142 metres in height, has 37 floors and was constructed between 1954 and 1960. It was designed by the Spanish architects and brothers, Julián and José María Otamendi, as an assignment of the Metropolitan Real Estate Agency. It is situated in the square; Plaza de España. It is a symbolic building for the square and the city. This building houses offices and apartments. It was the highest office building in Western Europe until 1967, after which it was surpassed by the 150-metre high South Tower in Brussels. The Torre de Madrid appeared in numerous Spanish movies released in the 1960s.
2

The Edificio Telefónica is located on the second half of the Gran Vía street. It was built between 1926 and 1929 by the Spanish Architect, Ignacio Pastor, as the headquarters of the National Telephone Company of Spain. The Company, founded in 1924, was actually a U.S. subsidiary of International Telephone and Telegraph (ITT), so the building was designed by the then eminent American architect, Lewis S. Weeks. The American influence and style can be seen in the metallic concrete structure. Nonetheless, at the end it was Pastor who finally elaborated and finished the architecture of the building. At 89 meters into the air and supporting 15 floors, the Edificio Telefónica was the first building of some height in Madrid. Therefore in some ways it is thought to have sparked the interest in skyscrapers in the city. The building was also used as a watch or spy tower by the Republican military army during the Spanish Civil War. Today the building is a Telefonica flagship store and hosts free artistic and technological expositions.
3

The Torres Blancas (The White Towers) building is located at the corner of the streets Corazón de María 2 and Avenida de America 37. The building was designed by Francisco Sáenz and the construction took place between 1964 and 1968. The building is 71 meters tall and has 21 floors. It is a structure based on cylinders sorrounded by balconies with wood lattices throughout its perimeter. It was designed for apartments and offices. At the top one can find a flat roof with a meandering pool. Despite its name, the Torres Blancas, is a single tower building which is not white, but gray concrete. Its name refers to the original project by Saenz, which featured two marble buildings. The vision and aim of Saenz was to build a very unique residential building. Saenz received the European Excellence Award for this building in 1974. He was so proud of the building that he went on to spend the rest of his life in it.
4

The Edificio del BBVA is the headquarters of the Madrid delegation of the Gipuzkoan bank, Banco Bilbao Vizcaya Argentaria or BBVA, as well as part of the Azca Complex mentioned elsewhere in this guide. It was also designed by Francisco Sáenz. This 30 floor building which hovers 107 meters above ground, was built between 1978 and 1981. One of its eye-catching features is a series of ¨umbrellas¨ that achieve dramatic treatment of light. The greatest challenge of constructing the Edificio del BBVA was that the tunnels for the rail line between Atocha and Charmatin were being drilled about the same time. This civil engineering nightmare was solved by placing 2 gigantic hollow concrete pillars of about 100 meters in height on either side of the tunnel.
5

The word Azca name is an acronym for Asociación Zona Comercial (Trade Zone Association). It is one of the most important commercial and financial zones in Madrid. This financial district is enclosed by 4 main streets namely: Orense street on the west, Raimundo Fernández Villaverde street on the south, the Castellana Avenue on the east and Avenida del General Perón on the north. The space was initially reserved for the construction of a large opera house and the zone was meant to exhibit homogenous architecture. However, each financial and commercial entity decided to build its tower according to particular criteria and style. Consequently, the architectural unity first envisioned in the plans and design was lost. Apart from Torres Europa, Picasso and BBVA mentioned in this guide, Torres Titania (106 m), Torre Mahou (100 m) and Torre Banco Santander (100 m) are also found in Zona Azca.
6

At 157m above ground, Torre Picasso, named after the Spanish artist, Pablo Picasso, was until 2007 the tallest building in Madrid. It was the first intelligent building of Madrid and it was designed by the Japanese-American architect, Minoru Yamasaki. Minoru Yamasaki was also the designer of the twin towers of World Trade Center in New York. Torre Picasso has 47 floors stands out in the AZCA zone for its white colour which is enhanced by its glass and aluminum façade. The building was built between 1982 and 1988. It was originally destined to also host a hotel apart from the office space. The roof has a helipad.
7

Torre Europa is a circular tower of 121m in height, also located in the financial and commercial complex of AZCA. It was built in 1985 and is said to be an intelligent building. It was designed to accommodate AZCA offices. Its thirty floors are topped by a terrace where there are sports facilities including a swimming pool and gardens. The exterior appears to be strapped with linings of concrete. The architect José Luis Ibarra´s idea, was a building where the walls, unlike in other AZCA buildings, were yet again the sustaining element. The façade is similar to the buildings of the World Trade Centre.
8

The Puerta de Europa buildings are found at the northern end of the Paseo de la Castellana. The buildings are also known as the Torres KIO, because they were promoted by the Kuwaiti company, Kuwait Investments Office (KIO). The buildings consist of two leaning towers, with a height of 114 m and 26 floors situated in the Plaza de Castilla square. These leaning towers are currently home to the headquarters of the troubled Spanish bank, former Caja Madrid now called Bankia, whose famous loans include the signings of Real Madrid Football club players like Cristiano Ronaldo and Kaka. The construction took place in two phases from 1989 to 1996. It is the work of American architects Philip Johnson and John Burgee. These two symmetrical buildings have an inclination of 15° to the Paseo de la Castellana axis and resemble traditional city doors at the end of this great avenue of Madrid. Initially, the buildings were to be completed in pink granite; however the materials that were ultimately chosen were light materials like glass and aluminum.
Image by Hernán García Crespo under Creative Commons License.