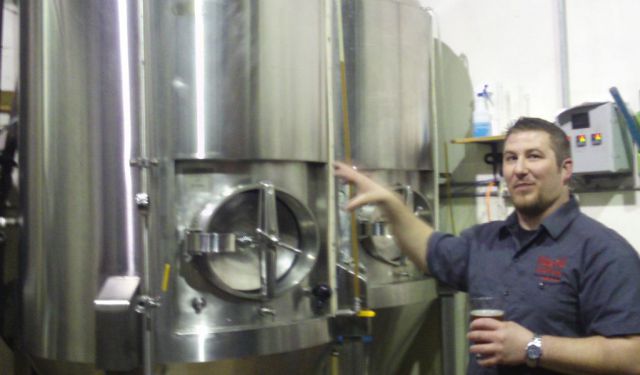 Microbrews are like a religion in Portland. In fact, the city has more microbreweries than any city in the world. Brewpubs abound – and many brew their own beers onsite – and locals consume microbrews with a spiritual zest. The variety of flavors and types of beer you’ll be able to access on this tour cannot be understated. Cheers!
This article is featured in the app "GPSmyCity: Walks in 1K+ Cities" on iTunes App Store and Google Play. You can download the app to your mobile device to read the article offline and create a self-guided walking tour to visit the attractions featured in this article. The app turns your mobile device into a personal tour guide and it works offline, so no data plan is needed when traveling abroad.

Bridgeport Brewing began in 1984 as the Columbia River Brewery, making 600 barrels of beer per year to start. Bridgeport occupies the old Portland Cordage Company building, which dates back to 1886 as a rope factory. As Oregon’s oldest craft brewery, Bridgeport gained in popularity – and now produces over 100,000 barrels of beer per year. The brewery boasts a number of award-winning beers, most notably the India Pale Ale and the Blue Heron Pale Ale. A strong menu, including a reasonable happy hour, offers up good food along with the brews – and the attractive outdoor patio is a great place to take in the rustic charms of the historic buildings of the area.
Image by Christopher under Creative Commons License.
2

Rogue Ales actually began in the southern Oregon town of Ashland in 1988. From there, pubs were opened in the Oregon towns of Newport, Astoria, Portland, and Eugene, among others – and even locations near Seattle and San Francisco. The Portland location boasts dozens of award-winning beers, as well as wines and spirits. An extensive menu includes Kobe beef in a number of items, as well as using many Rogue beers and spirits in the recipes. The Rogue is one of the few brewpubs in Portland that also functions as a distillery also making rum and other spirits. Tours of the brewery and distillery are available.
Image by Another Believer under Creative Commons License.
3

Opened in 2008, the Descutes Brewery and Public House occupies a charming corner location right in the heart of the Pearl District. Originally founded in the central Oregon city of Bend in 1988 before expanding to Portland, Deschutes brews like Black Butte Porter and Mirror Pond Pale Ale have become local favorites. The Public House offers a fine menu, with an especially large number of gluten free items available (even gluten free beer!), as well as a small – but economical – happy hour menu. The atmosphere is friendly and laid back – and a stop by the brewery room shows off gleaming vats and a wall of awards.
Image by Ross Bruniges under Creative Commons License.
4

Located in the renovated site of the old Blitz-Weinhard Brewery, which operated for over 140 years, Henry’s 12th Street Tavern offers a huge sampling of beers from local breweries. Over 100 beers are on tap – including such local stalwarts as Widmer, Bridgeport, Deschutes, MacTarnahan’s, Rogue, Full Sail, Amnesia, Laurelwood, and Hopworks Urban Brewery. Henry’s does not have the laid back hipness of many of the city’s brewpubs. Rather, it is slick and upscale – with a flurry of activity, large screens for watching ball games, and loud music. The food is reasonably priced – including a downright cheap happy hour menu. The outdoor patio seating area is particularly nice – with views of the original brewery tower in the courtyard.
Image by Christopher under Creative Commons License.
5

The Tugboat Brewery is easy to miss. It’s a charming, tiny hole in the wall along Oak Street, which is family owned and operated by Terry Nelson, his wife Megan, and Megan’s father John. Tugboat specializes in stronger British-style ales, and is the city’s oldest microbrewery. It is also one of the smallest microbreweries in the state – brewing only eight kegs per batch. The brews are not filtered or pasteurized, maintaining freshness for the many beers served on tap. Good food and live music on most nights also make Tugboat worth “barging” in for a visit (extremely bad pun intended).
6

Bailey’s Taproom does not have an onsite brewery, but is rather a great collection of beers from other local breweries – and a great chance to end the tour by catching some beers you may have missed. Twenty rotating taps focus on local brews in this pub that has a reputation as a laid back sanctuary right in the heart of the city’s action. In addition to the rotating taps (which are updated daily online), Bailey’s offers a wide assortment of local bottled beer to go. To end this tour, simply walk two blocks east – to 5th Avenue – in order to catch the MAX light rail’s yellow or green line south back into the heart of downtown.
Image by Ken Hawkins under Creative Commons License.