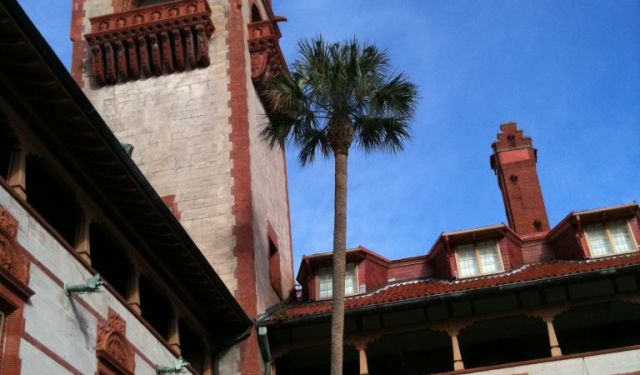 St. Augustine is considered to be the oldest, permanent European settlement in the USA. It is not a huge city area-wise, but it is filled to the brim with amazingly beautiful and historic sites and attractions! This tour begins at the Grace United Methodist Church, where the Old Downtown North tour ended, and explores the southern half of The Ancient City.
This article is featured in the app "GPSmyCity: Walks in 1K+ Cities" on iTunes App Store and Google Play. You can download the app to your mobile device to read the article offline and create a self-guided walking tour to visit the attractions featured in this article. The app turns your mobile device into a personal tour guide and it works offline, so no data plan is needed when traveling abroad.

Create Your Own Self-Guided Walks in St. Augustine
Guide Name: Old Down-town Part II: South
Guide Location: USA » St. Augustine
Guide Type: Self-guided Walking Tour (Article (A))
# of Attractions: 8
Tour Duration: 2.0 Hour(s)
Travel Distance: 1.1 Km or 0.7 Miles
Author: Stefan Siewert
Author Bio: Dana Newman has a bachelor’s degree from the College of Journalism and Communications at the University of Florida. After receiving her degree she followed her dreams to Europe to live an adventure and collect experiences, which she now writes candidly about from her present home in Munich, Germany. She considers it an honor to be able to live the life she’s imagined.
Sight(s) Featured in This Guide:
1

Throughout your time here in St. Augustine you will hear about Henry Flagler and the buildings he commissioned over and over again. Well, this Memorial Presbyterian Church is no exception. It was established by him in 1889 as a remembrance to his daughter who died during childbirth; it is here that he, his first wife Mary Harkness, their daughter Jennie, and her infant, Marjorie, are buried. The impressive church was built in the Second Renaissance Revival style, and modeled after St. Mark’s Basilica in Venice, Italy. And, as you can see from the intricate façade and gorgeous dome top, Henry Flagler spared no expense on its construction.
Image Courtesy of Ebyabe.
2

Designed by Franklin Smith in 1883 to be his private home, this structure is the first modern building in St. Augustine to have been created by poured concrete, which makes it among the first modern buildings in all of the USA to have been made this way. The building’s unique design pays tribute to and is modeled after the 12-century Moorish Alhambra Palace in Granada, Spain. When Flagler later began his surge of building projects throughout St. Augustine he and his architects greatly imitated this building style, which reflects the city’s Spanish roots.
Image Courtesy of Ebyabe.
3

The grand Ponce de Leon Hotel was Henry Flagler’s first project in St. Augustine with construction beginning in 1885. With an amazing Spanish Renaissance façade, gorgeous ceiling murals, and intricate Tiffany windows, the resort was designed to be a luxurious retreat for wealthy visitors during the temperate winter months. The hotel hosted guests every winter until World War II when it was used as a Coast Guard Training Center! And then, the post-war life of the Ponce de Leon Hotel was rocky to say the least. In 1963 Vice President Lyndon Johnson accepted an invitation to attend a banquet lunch which celebrated St. Augustine’s 400th birthday. It was set to be an all-white affair but Dr. Robert Hayling and other civil rights activists protested. Their protests were considered successful for the time in that they led to peaceful negotiations, which then maintained that two tables must be set aside for local black residents. In 1964 the Ponce de Leon Hotel was in the spotlight again when over a hundred students from the all-black Richard J. Murray High School marched into the hotel’s elite dining room and protested in the form of a sit-in. Today, the old hotel is the campus of the aptly named Flagler College, an accredited four-year liberal arts college. The Flagler Legacy program, founded by the students in 1998, does give guided tours of the hotel if you’re interested in learning and seeing more than just the grounds and foyer.
Image Courtesy of Daniel Schwen.
4

In 1887 Henry Flagler commissioned the building of the Spanish Renaissance Alcazar Hotel. The architects who designed this building and most of Flagler’s buildings, Carrère and Hastings, went on to design the New York Public Library and the U.S. Senate office building as well. At the time the Alcazar Hotel was meant to be the less formal and less expensive hotel, when compared to the decadent Ponce de Leon Hotel next door. But it was by no means shabby; at the time, it still had the largest indoor swimming pool in the world! In 1932 the hotel closed, but it was not yet the building’s end. In 1946 Otto Lightner, the Chicago founder and publisher of Hobbies Magazine, purchased the property and two years later, in 1948, he opened it up as a museum full of his American Victorian era collection. When he died he donated the property and the building to the City of St. Augustine with the stipulation that the city keep the museum open. So now, the old Alcazar Hotel is now split into two functions; the north half of the building is St. Augustine’s City Hall while the south section is, as promised, the Lightner Museum.
Image Courtesy of Infrogmation of New Orleans.
5

This beautiful Moorish Revival style hotel was designed by Franklin Smith; when it opened in January of 1888 with just a few guests checked into the lavish rooms, its name was the Casa Monica Hotel. A few months after opening Henry Flagler purchased the property and changed the name to the Cordova Hotel. Mr. Flagler did a great job with the hotel and in his care it absolutely thrived. From 1932 to 1962 the Hotel Cordova closed its doors. When it finally reopened 30 years after closing, it was no longer a hotel but rather the St. Johns County Courthouse. In 1995 the county abandoned the building, but in 1997 The Kessler Collection purchased it, renovated it, and reopened it in 1999 under its original name, the Casa Monica Hotel.
6

Had enough history for the moment? Step into Potter’s Wax Museum to see a wide array of intricately and very impressively designed wax figurines. Established in 1948 by George L. Potter, Potter’s Wax Museum is said to be the first wax museum in the United States. From famous politicians and entertainers to horror characters and historical personalities, Potter’s Wax Musuem seems to have it all. It also has a theater and a wax studio. Open 7 days a week, Potter’s Wax Museum costs about $9 for an adult and offers discounts for children and seniors.
7

Like many St. Augustine buildings, this house has worn a number of different hats throughout the years. When it was first constructed circa 1797 it served as a small store, warehouse and private home. About 58 years later, in 1855, Louisa Fatio, a women whose family had lived in Florida for several generations, purchased the property and turned it into a boarding house for “distinguished guests.” Like the visitors to Flagler’s hotels, guests at her boarding house came down from the north during the winter to enjoy St. Augustine’s milder climate. In 1939 the house was taken on by the National Society of The Colonial Dames of America in the State of Florida. They have turned it into a museum that is open to the public.
8

The Old St. Augustine Village complex has many historically significant components. For one, it is an outdoor museum housing 9 historic buildings that date back to the 1700s. One of these buildings is the Prince Murat House which is named after Prince Achille Murat, who was the nephew of Napolean Bonaparte. Prince Murat lived in the house in 1824 and was not the first resident, but certainly the most famous. In addition, the museum also has archaeological records showing that a hospital and cemetery from the 1500s and a Spanish Colonial defense line and early St. Augustine bridge from the 1700s were located on these grounds. Lastly, but certainly not least, in 1863 this land was also where the Emancipation Proclamation, the decree which freed all slaves in Florida, was read. I’ve only touched on a few of the interesting things at the Old St. Augustine Village, so be sure to go in and see for yourself!