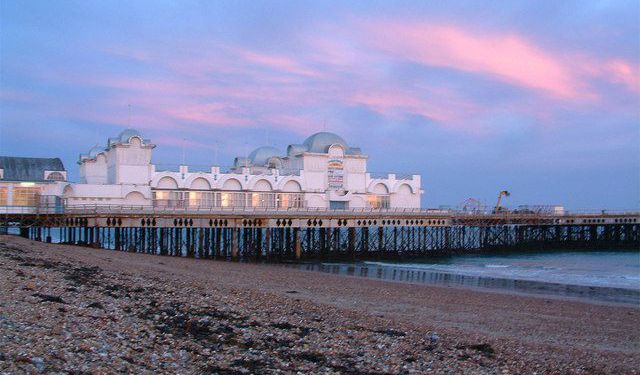 Portsmouth’s seaside, an area rich in natural abundance coupled with multiple marine life treasures is a prefect afternoon getaway for singles and families alike. This Southsea city blended into an amazing mix of old and new has special magic all its own. With Portsmouth’s Seaside walks tour, We’ll show you were to enjoy unique attractions that you’ll remember for years to come.
This article is featured in the app "GPSmyCity: Walks in 1K+ Cities" on iTunes App Store and Google Play. You can download the app to your mobile device to read the article offline and create a self-guided walking tour to visit the attractions featured in this article. The app turns your mobile device into a personal tour guide and it works offline, so no data plan is needed when traveling abroad.

Create Your Own Self-Guided Walks in Portsmouth
Guide Name: Portsmouth Seafront walks
Guide Location: England » Portsmouth
Guide Type: Self-guided Walking Tour (Article (A))
# of Attractions: 6
Tour Duration: 2.0 Hour(s)
Travel Distance: 3.6 Km or 2.2 Miles
Author: Tara Newlands
Author Bio: Tara Bradley-Newlands, is an Arizona native currently residing in the United Kingdom. Tara as penned three several romance stories as well as contributed published written work for a well known paranormal group, her travels have taken her to the beaches of Mexico to the rugged hills of Scotland where she loves to spend time with her family. She loves to teach using the beauty of words.
Author Website: http://www.freewebs.com/taranewlands
Sight(s) Featured in This Guide:
1

South Parade pier offers a unique, historic venue to experience Portsmouth’s Southsea coastal area. This classic seaside site houses a traditional family amusement arcade pairing modern convenience with the area’s rich cultural history. South Parade pier overlooks the enchanting Isle of Wight. Visitors can expect a calming seaside experience on the pier as they watch gentle waves rolling in from the Solent toward the pier’s outside sea view deck. This classic pier area offers the best peaceful point of view sights of sea side activities throughout the area. South Parade pier provides a great vantage point for watching exciting on sea activities such as yachting and motor boating throughout the day. Enjoy this seaside gem; it’s a treat not to be missed.
Image by Ian Stannard under Creative Commons License.
2

A spring to autumn seasonal attraction, Southsea Castle is a classic of British military architecture. Built in 1544 under the request of Henry VIII, Southsea Castle was the flagship in a series of fortifications designed for England’s coast defenses against an invasion. The castle’s single incident of capture occurred during the English civil war by parliamentarian forces during their conflict with then king, Charles I who had attempted to escape across the Solent to the Isle of Wight. Southsea castle’s defenses were continually updated throughout centuries until it left military service in 1960. Nevertheless, the castle as served as a military prison, a lighthouse and continues to serve Portsmouth’s shipping lanes today. Be aware that there are two available approaches to Southsea, you can continue east along the banks of the Solent or turn southeast toward the current D- Day museum which will allow you to approach the castle from the front.
Image by Matty Ring under Creative Commons License.
3

Opened in 1984 to commemorate the allied effort to defeat Nazi Germany, The D-Day museum operation focuses on the Overlord embroidery which depicts through a multi-language sound guide, touching tributes to world war two allied fighters. Within the museum, lays a series of galleries presenting archived film footage, music plus wartime images of allied defenses during World War two seeking to evoke in museum visitors, a deeper sense of what allied combat troops experienced during a conflict that changed world history. Multiple museum displays provide the British experience of wartime combat during the World War two era climaxing with a stunning reconstructed visual display of the allied dusk to dawn landing by sea and land on D-Day itself. In a special tribute to the era, Portsmouth men, women and children share their recorded memories with museum visitors of what life was like in Britain during and before D-day.
Image by Margaret Sutton under Creative Commons License.
4

Portsmouth is an area rich in marine life. Blue Reef aquarium seeks to inspire visitors to gain a deeper understanding of the natural world in which we live by providing educational opportunities to gain a clearer picture of marine life along the British coast and the Mediterranean while providing an up close opportunity to view a coral reef. Throughout Blue Reef, there are over 40 displays seeking to aid visitors in gaining a deeper appreciation of the amazing variety of marine life throughout the world. This multi season gem located between South Parade pier and Clarence pier overlooking the Solent promises to be a great visit regardless of the weather.
Image by Peter Facey under Creative Commons License.
5

As the largest amusement park area on the south coast, Clarence pier is an enjoyable walking experience for visitors of all ages. The original pier opened in 1861, was bombed by the Luftwaffe during World War Two and was later reopened in its present form during the 1960’s.

Housing three large indoor entertainment centres with a multitude of games for children and adults , Clarence pier is a hub of activity where visitors can often view diverse events from easter egg hunts in April to breathtaking fire works displays in November. Entry onto the pier is free with rides tokens available at the rides office during peak season. Due to weather, the rides area is a seasonal activity available from daily starting in early march to weekends only during the winter months.

As England’s oldest military garrison church dating from the early 1200 hundreds, Portsmouth’s Royal Garrison Church is a marvel of human engineering. Maintained by the English Heritage Society, this Plantagenet era example of classic British construction is listed as an ancient monument. This important historic church was saved from burning to the ground in 1941, after a Germany air raid in the area, by Portsmouth’s soldiers and airmen. Classic stained glass windows depict important scenes from British history, and visitors can still see by looking closely along the edge’s of the church’s benches were the 1940’s fire was stopped from spreading. There are nearly 300 plaque memorials associated with British history available for public viewing while outside in the church graveyard lays a visually stunning grave relic to Sir Charles Napier in silent remembrance to lost soldiers which stands near on the path in front to the church’s west door. This amazing free attraction is available seasonally from April to the end of September.
Image by Rennett Stowe under Creative Commons License.