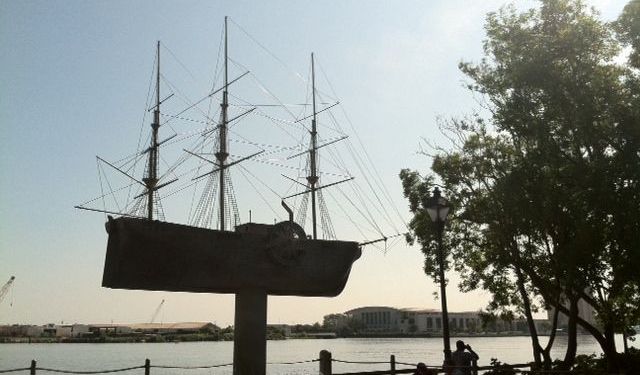 Savannah is a city known for quirky characters, haunting stories, and harrowing history. As a seafaring site, pirate lore is naturally a major part of Savannah’s charm. The city was even the site where Captain Flint of Treasure Island fame brought his nefarious crew. Discover the real story about the sea-roving villains who cruised the coast and swarmed the streets of this mysterious city.
This article is featured in the app "GPSmyCity: Walks in 1K+ Cities" on iTunes App Store and Google Play. You can download the app to your mobile device to read the article offline and create a self-guided walking tour to visit the attractions featured in this article. The app turns your mobile device into a personal tour guide and it works offline, so no data plan is needed when traveling abroad.

Create Your Own Self-Guided Walks in Savannah
Guide Name: Real Pirates of Savannah
Guide Location: USA » Savannah
Guide Type: Self-guided Walking Tour (Article (A))
# of Attractions: 7
Tour Duration: 2.0 Hour(s)
Travel Distance: 1.7 Km or 1.1 Miles
Author: Grace Fleming
Author Bio: Grace Fleming is a freelance writer, historian, and storyteller from Savannah, Georgia. She attended college at Armstrong University in Savannah, where she teaches the history of America and Georgia. She has produced a series of historical prints, greeting cards, and stories from colonial America which are called collectively “A History of Misbehavior.”
Sight(s) Featured in This Guide:
1

1) Ships of the Sea Museum

Inside the Ships of the Sea Museum, you’ll find a replica of the Ship Anne, which was the three-masted galley that brought the original settlers to the shore of the Savannah river. Savannah’s pirate history began at the end of the long, treacherous trek across the sea, before the first colonist ever set foot on the city’s sandy shore. Just a few miles off shore, Savannah’s first inhabitants were alarmed to see a mysterious ship closing in on them.

One colonist wrote in his journal: “We were alarmed by a sloop who…bore down upon us looking very suspicious [and] made us conclude that he must either be a pirate or Spanish Guard…and that his intention was to plunder us. Mr. Oglethorpe order'd all our men upon deck, all the women to keep below.”

The menacing craft charged within reach of the Ship Anne's guns, so the Captain ordered a cannon to be fired across the stem of the vessel. The shot fell "about a hundred yards a head" of the ship. A second shot landed much closer, and these warning shots caused the pirate ship to lower its top sails to back off. The pirates could likely see that the entire deck of the Ship Anne was lined with men, armed, loaded and ready to fight. The sight was enough to deter the attackers, and the pirate ship turned course and ended its assault.

There was evidence that Savannah was a city in league with pirates for a time in the nineteenth century. In April of 1818, the brig Nordberg sailed from the port of Havana bound for Hamburg, laden with a cargo of sugar, coffee, logwood and cigars. Somewhere along the coast of Florida, the unfortunate ship was “forcibly and piratically seized.”

The terrified and tormented crew was taken to the West Indies—but the goods were carried to the Savannah Custom House, where the pirates somehow knew they would be well-received. The cargo was sold by to different well-known characters in Savannah. Representatives of the federal government realized that the goods being peddled in town were illegal pirate booty, so they filed a suit against all persons about the city in possession of pirated goods. After a lengthy process, the suit was ultimately unsuccessful, and Savannah enjoyed the benefits of this evil practice.

Below the bridge, between Bay Street and the River are dark, secluded spots where many unsavory characters once lurked during the days of tall ships. Old Savannah enjoyed the profits of piracy so much that she even grew her own brand of pirates—river pirates--who preyed on unsuspecting sailors brought to the city aboard trade ships. A report from 1844 warned: “There is a regular band of cutthroats and scoundrels in this city who shrink from the light of day but prowl about during the night to do their nefarious work--sailor landlords and crimps who get their living by stupefying the sailors with liquor.” These scoundrels would lure sailors into alleys, boarding houses, and grog shops in these dark spaces around the riverfront, where they plied them with rum in order to squeeze from them any profits or pay they had coming to them.
Image Courtesy of Joe Senft.
4

This bell dates back to 1802, and it was used to sound any alarm that befell the city, like fire, invasion, potential insurrection or outbreak of a disease. Another of its uses was to sound the city curfew. After the bell tolled each night, no sailors and no one of African descent was to be discovered on the city streets.

One little -know fact of piracy is that pirate ships were quite democratic and pirate populations very diverse. One night in the early 1800s, a pirate ship arrived with "more than 100 free African firebrands wielding firearms and knives." These terrifying bandits marched about town in a brazen fashion. The pirates were lurking in the streets long after the curfew drinking, carousing, and gambling. The city council took action the following day and ordered all the African pirates arrested and thrown into the city jail. The agitators were indeed corralled and assembled in jail , but the total number after the roundup turned out to be only ten. The sight of free, armed Africans in this young Southern city had apparently magnified the perceived danger and multiplied the threat in the heads of city leaders.

The river was once filled with dozens of sailing vessels, anchored off the river’s bank. Among the floating ships there were always a few pirate and privateer vessels. The international mix of men always posed a problem--especially as the brigands poured on shore and filled the grog houses. One day in 1798, two "Spanish privateers" anchored on the river while the men who sailed them enjoyed the patronage of pubs and prostitutes in Savannah. To no one’s surprise, a brutal fight broke out in one questionable establishment, when some men from Savannah recognized some of the Spaniards as the privateers they’d fallen victim to on a previous voyage. That night, a half dozen men in disguise boarded the Spanish schooner. According to news reports, they maltreated the Spanish pirates, secretly navigated the ship up the river in the dark of night, put the men on shore, and burned the ship.

The visiting pirates didn’t take well to this treatment, and their outrage turned quickly into a riot. Gunshots and fights broke out across the town. Savannah officials tried to keep peace, and stationed several armed guards aboard the second Spanish vessel, trying to avoid an international disaster. Nonetheless, more fights broke out about town and the second ship was also burned. Three men died in the uproar before the ashes had settled to the bottom of the river.
6

To the south of the mouth of the river, Blackbeard Island sits, still unoccupied and looking just as it was when Edward Teach used the site as a place of respite. Blackbeard used this nearby island to tend to his profits and divide his booty between piratical raids. Some say the island still contains buried treasure from those days.

This river has been the pathway to disaster for many unwary passengers, who lived to tell blood-curdling stories of their encounters at sea.

One captain told a tale of leaving Savannah to soon encounter a French pirate ship, laying in wait for him. The pirates robbed him of everything of value, including rope and rigging, and “lanterns, speaking trumpets, and time glasses” when the pirates finished plundering they “damned him for an American rascal, set the crew into small boats, and used the ship's own speaking trumpet to wish them a good voyage.”
7

Dating from 1753, the Pirate’s House is one of Savannah’s oldest surviving buildings, and it stands as the most significant location when it comes to Savannah’s piratical past. This Pirate House is the very site that inspired the Pirate House tavern in Robert Louis Stevenson’s Treasure Island --a tavern that played host to bloodthirsty brutes, and the place where Captain Flint died in an upstairs room.

It’s no secret that pirate ships had a rather unconventional way of recruiting men. An unsuspecting traveler seeking to quench his thirst was often the victim of a knock on the head in the back of a grog shop or the shadow of a tavern wall and the recipient of a new career in plundering on the high seas.

The Pirate’s House is said to rest upon a secret passageway that extends from the rum cellar to the river. Though this tunnel, many men were carried off and placed aboard pirate ships, where they would awake to find themselves far away on a floating marauder ship.