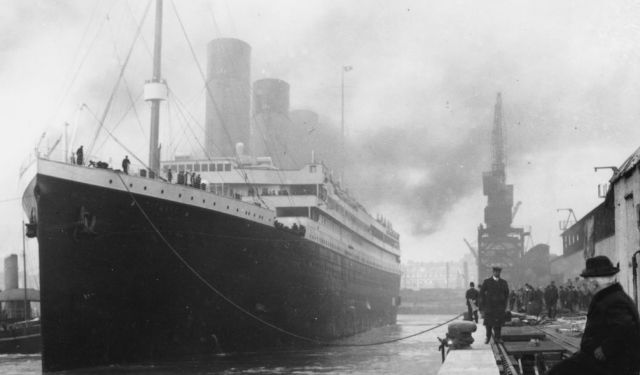 The Titanic is perhaps the most famous ocean liner ever built. She left Southampton on the 10th April 1912 on her maiden voyage across the Atlantic, but crashed into an iceberg just four days later, sinking with the loss of over fifteen hundred lives. This tour will take you around the city to all the key Titanic locations, revealing the full story of the disaster along the way.
Image Courtesy of Wikimedia and Unknown.
This article is featured in the app "GPSmyCity: Walks in 1K+ Cities" on iTunes App Store and Google Play. You can download the app to your mobile device to read the article offline and create a self-guided walking tour to visit the attractions featured in this article. The app turns your mobile device into a personal tour guide and it works offline, so no data plan is needed when traveling abroad.

SeaCity is the perfect place to start your Titanic walking tour.

The exhibits inside reveal the history of the city and its close association with the sea, which includes an extensive Titanic exhibition that tells story of the ship and the people that sailed upon it.

The museum is open seven days a week from 10am to 5pm, except Christmas Day, Boxing Day and New Years Day.

Entry is £8.50 for adults and £6 for children and concessions.

Enter through the main doors and walk up the stairway to your right. At the top, outside the doors to the Council Chamber, is a bronze memorial to the five postal workers who died in the disaster.

The ‘RMS’ that comes before Titanic’s name stands for ‘Royal Mail Ship’. Along with its passengers, the Titanic was contracted to carry three thousand and sixty four mail bags to New York.

The five staff - three Americans and two Brits - sorted the post from a mailroom deep within the ship.

When disaster struck and the mailroom began to flood, the men valiantly struggled to save two hundred sacks of registered mail, but sadly it was all in vain. All five men went down with the ship.

Bronze from Titanic’s reserve propeller was used to cast this memorial.

This memorial commemorates the musicians who died in the disaster.

In all, there were eight musicians on board, playing in two separate bands. On the night of the disaster band leader Wallace Hartly assembled them together in the First class lounge and played to calm the nerves of the frightened passengers.

As the ship flooded, the band moved up to the Boat Deck and continued to play as passengers boarded life boats.

No one knows what the band played as their final song, but reliable witnesses talked of Joyce’s, ‘Songe d’Automne, and the hymn, ‘Nearer My God to Thee’, which features in this memorial.
4

Set in the beautiful surroundings of East Park, this sculpture of an angel at the bow of a ship marks the memorial to the thirty five engineers who lost their lives, including Chief Engineer Joseph Bell, Titanic’s designer, Thomas Andrews, and Albert George Ervine, an assistant Electrician who was just nineteen years old.

As Titanic began to flood, engineers worked tirelessly on the electrical systems to keep the lights and pumps operational, as well as provide power to the ship’s radio that was frantically sending out the ‘Mayday’ distress signal. Without their sacrifice, many more lives would have been lost.

Holy Rood Church was built in 1320 and was one of the original five churches within the old city walls. On the night of November 30th 1940 it was hit by a bomb during a German air raid, leaving the ruins that still stand today.

The church has long been known as ‘the church of the sailors’ - due to its close proximity to the docks - so it seems appropriate that it was later transformed into a memorial garden to all those that lost their lives at sea.

A memorial fountain to Titanic's crew, stewards and firemen stands in the right hand corner.

Alongside it is a ‘talking post’, which plays recordings of local people who were alive at the time of the disaster. Press the buttons to hear their stories.
6

Built in 1843, St Josephs is the oldest Catholic church in Southampton.

Back in the early twentieth century, the church was an important part of the local community and housed the Stella Maris Club, a social welfare organization for mariners and their family. ‘Stella Maris’ is the name of the patron saint of the sea and is often known as the ‘Star of the Sea’, for she guides them to safety, just like the stars in the sky guide them to shore.

Inside the church is a memorial table with a brass plaque dedicated to the staff of Ritz Restaurant, the most up-market and exclusive restaurant aboard the Titanic. Its staff came from around the world, including twenty-six Italians, seventeen French and others from Switzerland, Belgium, Spain and Holland. Sadly, only three members of staff survived the disaster.

Such was the sorrow amongst the local Italian community that the Southampton International Club commissioned this memorial.
7

If you’d been sitting here back in April 1912 you would have been able to look out at Titanic, moored up across the way on Dock 44 being readied for her maiden voyage.

Back then, this was a bustling tavern populated by dockers and seaman. One of which was James McGrady, a 27 year old first class steward, who lodged here the night before joining the ship. He’d been at sea for eleven years, joining his first ship at the age of 16. Before Titanic he worked aboard ‘Oceanic’, another transatlantic ocean liner owned by the White Star Line.

Tragically, Titanic was to be his last ship.

McGrady’s body was recovered from the sea on the 25th May - forty days after Titanic sank - and was the last body to be recovered. It was taken to Halifax, Nova Scotia and buried with other Titanic victims in the Fairview Lawn Cemetery.

The Platform Tavern is also famous for featuring in the 1997 movie, ‘Titanic’. It’s the bar where Leonardo Di Caprio’s ‘Jack’ wins his ticket in a poker game.
8

The docks are private land, so you will first need to ask permission from the security guards at the gatehouse before proceeding. Access is very rarely denied.

Once inside, the Titanic Memorial Stone is located to your left.

Alongside it is an information board that displays the location of Titanic’s berth. Back then it was known as ‘Pier 43/44’, but now it’s called the ‘Ocean Terminal’.

Titanic and her sister-ship, Olympic, were so big that the White Star Line had to have the pier specially constructed to accommodate them, using 16 acres of land.

Titanic was 882 feet long, 92 feet wide and weighed 46,328 tons. She rose 60.5 feet from waterline to boat deck. Her top speed was 23 knots, powered by two engines and a turbine that required 825 tons of coal a day to turn three giant propellers, 46 feet high. Until her sinking, she was the largest vessel in the world.
9

Back in 1912, this building was the Southampton offices of the White Star Line, owners of the Titanic.

When news of the disaster filtered back to England it was here that friends and relatives gathered for news of their loved ones. Survivors names were displayed on blackboards erected outside the building.

The high loss of life was largely attributed to a lack of lifeboats. There were only twenty on board, enough for 1178 people, but many were not filled to capacity. Titanic also carried 3500 lifebelts and 48 life rings, but the low water temperature meant that most people entering the water died from hypothermia, rather than drowning.

A memorial plaque on the gatepost outside Canute Chambers commemorates the disaster.
10

As you approach South Weston House you will cross a railway line that still carries freight to the docks. Back in 1912, this line also carried passengers coming from London. They alighted at platforms that once stood at the rear of the building, now a car park.

South Weston House is now private apartments, but back in Titanic’s day it was a first class hotel catering to cruise ship passengers. From its bedroom windows, guests could look out across the docks and see Titanic tied up its berth.

Continue past South Weston House and down Terminus Terrace and you will see the old Railway Station, which is now a casino. This grade-2 listed building was designed by Sir William Tite and built in 1839.
11

Back in 1912 this was a busy pub populated by firemen and engine room workers. On the morning of Titanic's departure, some of the crew popped in for a final drink. One thing left to another and before they knew it, time had passed and they were going to be late.

Despite rushing for the docks, three brothers named Slade missed the gangplank and watched Titanic sail away without them, a twist of fate that would ultimately save their lives.

Today, The Grapes is a welcoming pub with a fine collection of Titanic photographs and a framed blueprint of the ship. It’s also the last stop on the tour.