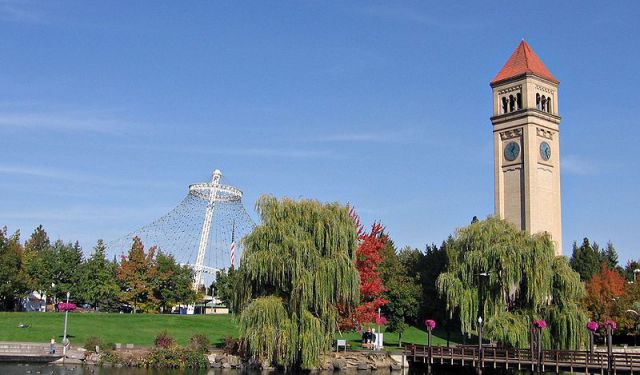 Originally called Spokane Falls, the city of Spokane was founded in 1871 - spurred by the fur trade and mining operations. This guide centers on the downtown area on both banks of the Spokane River, with Riverfront Park and Spokane Falls serving as the tour's centerpiece - and include many historic buildings, a university, and a number of performing arts centers offering many year-round entertainment options.
Image Courtesy of Wikimedia and Mark Wagner.
This article is featured in the app "GPSmyCity: Walks in 1K+ Cities" on iTunes App Store and Google Play. You can download the app to your mobile device to read the article offline and create a self-guided walking tour to visit the attractions featured in this article. The app turns your mobile device into a personal tour guide and it works offline, so no data plan is needed when traveling abroad.

Occupying a space on the south bank of the Spokane River just east of Riverside Park, this convention center and performing arts center was originally the Washington State Pavillion of the Expo ’74 World’s Fair in Spokane. The convention center contains over 164,000 square feet of space to host conventions and other events – including three distinct exhibit halls. The adjacent 2700-seat performing arts center (formerly the Opera House) houses a number of theatrical and music events. Past events include musicals “The Lion King” and “Phantom of the Opera”, performers such as Jerry Seinfeld, and an array of symphony concerts, dance, lectures and opera events.
2

Originally opened in 1908 as Kemp and Hebert’s department store (which fell victim to the Great Depression and closed in 1940), the Liberty building has seen a number of incarnations – including the Liberty Furniture Store from 1944 until 1986. Listed on the National Register of Historic Places, the building now houses iconic Spokane businesses such as Auntie’s Bookstore, Pottery Place Plus Cooperative, and Uncle’s Games, Puzzles, and More. The red brick building was designed in the Chicago architectural style, with a four-story atrium and surrounding mezzanine. The building also houses the renowned Sante Restaurant and Charcuterie, as of September 2008.
3

The centerpiece of the city, this 100-acre park along the Spokane riverfront was created in 1974 to host events for the World’s Fair. A number of features are contained within the park – including a large pavilion, the iconic 155-foot high clock tower (originally part of the Great Northern Railroad Depot), amusement park rides, a carousel, an IMAX theater, a wintertime skating rink, and a unique gondola ride over Spokane Falls. A number of civic events are hosted at Riverfront Park, including a July 4th fireworks display, Kid’s Day, Oktoberfest, a number of sporting events, and the bicycling festival called SpokFest.
Image Courtesy of Mark Wagner.
4

The Spokane Public Library’s current downtown branch opened in 1994. The library contains over 116,000 square feet of space and includes a children’s wing, wireless Internet access, the Gates computer lab, an art gallery, and a skywalk connecting the building to nearby shopping and restaurants. The library offers classes on music and computer skills – including “Budget Travel on the Web” – for all age groups, as well as many story-time events for kids. The South Hill Discussion Series offers a book club experience for adults, and downloadable audio books and ebooks are available from the library, as well as a large collection of traditional books.
5

This historic theater for performing arts was originally opened in 1915 as a movie venue called the Clemmer Theater. The legendary Bing Crosby, who grew up in Spokane, performed at the theater as a local act in the 1920’s. After many years of neglect, the theater was purchased and refurbished in 1988, and added to the National Register of Historic Places that same year, and renamed the Metropolitan Performing Arts Center. Businessman Mitch Silver bought the building in 2004 and in 2006 renamed it the Bing Crosby Theater to honor Crosby’s local ties. Today, the theater seats about 756 people (including both orchestra and balcony levels), and hosts a number of concert events of various genres.
6

The original Knitting Factory was opened in 1987 in Manhattan (very near CBGB) as a venue for experimental music performance by bands such as Sonic Youth and Yo La Tengo. The Spokane location, formerly a Bravo Entertainment club, was transformed into The Knitting Factory in 2008, expanding to include many other musical genres, and joining added locations in Boise and Los Angeles. The Spokane Knitting Factory holds 1500 people, and recent performers have included such diverse acts as Queensryche, The Reverend Horton Heat, Blue October and They Might Be Giants. Food and drinks are served both in the showroom and in the onsite MIXX 916 lounge.
7

This fantastic Art Deco movie theater opened in 1931, and was designed by the same architect (Robert C. Reamer) who designed the Old Faithful Inn in Yellowstone National Park. Originally part of the Fox Film Corporation, the venue was a movie house until 2000, when the Spokane Symphony purchased the historic building to save it from demolition. A $31 million renovation project was completed in 2007, and the theater was officially renamed Martin Woldson Theater at the Fox. Today the theater, which seats 1600 people, features a number of symphony, dance and concert events – including such acts as K.D. Lang, the B-52s and David Byrne.
8

Originally called the Cheney Cowles Museum, this museum – located just a few blocks west of downtown – is the largest in the region. Affiliated with the Smithsonian Institution, the museum includes five underground galleries, the Center for Plateau Cultural Studies, an orientation gallery, café, store, community room and education center. Past exhibits have included “Living Legacy: The American Indian Collection”, “Toys, Toys, Toys” (featuring historic toys spanning generations), and a number of collections from specific artists. The adjacent Campbell House – built in 1898 and listed on the National Register of Historic Places – is also part of the museum.

To end this tour, simply walk one block south to catch bus 60 or 61 eastbound toward downtown.